How did Britain end up swimming in sewage? Now we no longer have the protection of the European Court of Justice, where can we turn? 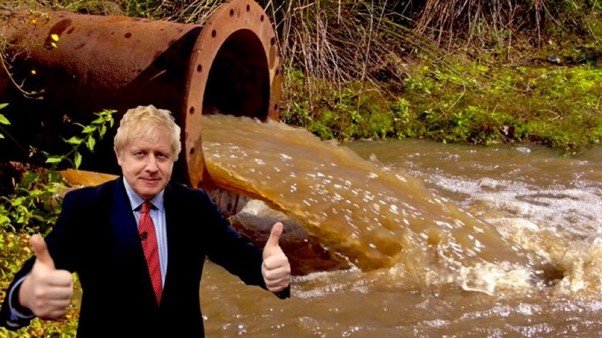 To be reviewed by Louise

Excuse the language, but you know the nation is really in the shit when #StoolBritannia was recently trending and all just one week before we host COP26.

What on earth must the world think of our dirty little nation? We’re pumping sewage into our own waterways for it to then find its way back into our food chain. We have fallen so far, so quickly that we are literally eating our own shit here in Brexit land.

How did this come about? We’ve never been very highly regarded in Europe for our environmental standards but last week, 265 MPs voted to allow raw sewage to be dumped into our rivers and seas. Not quite what they pledged in their 2019 manifesto.

Stay out of the sea

We expect them to lie at every turn, it is what they do. But people will literally vote to be shat on again at the next election and repeat for the rest of their lives. Why on earth do people vote for more of the same? All across the country, signs are springing up warning people – and their pets – to stay out of the sea.

Like many, I have campaigned relentlessly for the last five years to stop Brexit, or at least to have the final deal put back to the people for a vote. We were called Traitors, Libtards, Snowflakes, Remoaners and all the rest. I used to remind Leavers that it was only the EU’s threat to take the UK government to court that kept our beaches free from human excrement, condoms and tampons.

Who remembers what Blackpool was like in the 1980s? Who else remembers that the government’s justification for their failure to clean up the beaches at Brighton, Blackpool and Skegness is that they weren’t used for bathing anyway?

Of course, this was all dismissed as ‘Project Fear’. But only 10 months after we left the EU, here we are with red crosses covering many of our beaches. They’re not safe. We’re now stuck on our little island with blue passports but no blue flag beaches, pumping raw sewage into our own food chain is considered normal and half the country is clapping like a demented sea lion that “Boris is doing his best”.

Why do we find ourselves in this mess? Central Bylines first reported the Brexit-related problems experienced by the water companies in September.

These ongoing problems have ravaged parts of the UK economy since we left the EU’s customs union and single market. They can be attributed not only to the new bureaucracy for importers and exporters, but also to the shortage of lorry drivers. For the water industry, the inability to move ferric sulphate from ports to water treatment works is proving disastrous.

It is worth noting that the fundamental failure of our government to protect its own citizens is likely to get worse. We are still in a grace period with the EU whose end the UK keeps delaying. When that finally ends, companies will face far worse bureaucracy than they do today. It’s hardly the bonfire of red tape that we were promised in 2016.

Please be sure to let them know how you feel about this vote. But please also consider writing open letters on social media and to your local newspapers. They need holding to account but of course please be polite, we do not encourage any continuation of the politics of hate.

I will leave you with the thought that, in 1973, we joined the EEC as the ‘Sick Man of Europe’. Perhaps we will eventually rejoin as the ‘Dirty Old Man’ instead.  then, I’ll sign off with this tweet from Mike Galsworthy

“Happy Brexit everyone – don’t get sick!!”

Below is a list of Conservative MPs (including email addresses and social media handles) in the Central Bylines region who voted to remove the Lords amendments. Please do let your MP know what you think.

Council mergers - a lesson in confusion