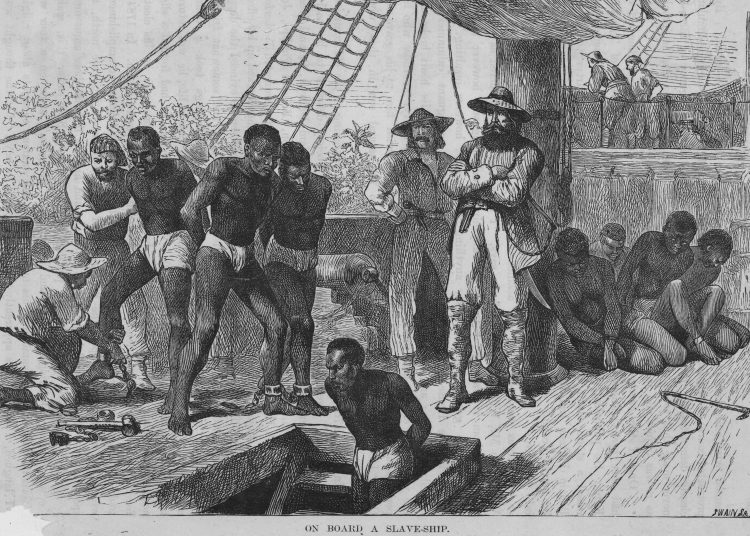 circa 1835: Slaves aboard a slave ship being shackled before being put in the hold. Illustration by Swain (Photo by Rischgitz/Getty Images)

The heritage of the slave trade refuses to go away. Shortly before Christmas a news item appeared in the Observer about the Tory MP Richard Drax. Mr Drax is very wealthy, and according to the Observer much of his inherited fortune came from the Atlantic slave trade. This predominantly British enterprise ran from the 17th to the 19th century, taking millions of people from Africa against their will, and enslaving them on the sugar plantations of the West Indies. The Observer also included interviews with prominent British and West Indian commentators, arguing that some of that wealth ought to return to the West Indies as compensation for the destruction caused by the slave trade.

Mr Drax certainly makes a convincing villain in this drama. His wealth is well documented and its traceability to the slave trade is clear enough to satisfy the Observer. And we know that there are others (individuals and organisations) who have been exposed as heirs to slavery. But despite Mr Drax’s suitability as the bad guy I’m going to suggest that we take a slightly more considered approach to the question of compensation for the slave trade.

The lasting damage created by this trade is extensive. The social and cultural legacy of slavery is generally agreed to be deeply damaging for those societies that have descended from the enslaved populations, and the damage to West African societies from the loss of millions of able bodied people (usually young adults) was likewise colossal. There has been some recovery, but economies and societies on both sides of the Atlantic still bear the scars. Many British people with roots in those areas likewise suffer ongoing disadvantage as the heritage of slavery. And none of this harm was done unintentionally, inadvertently or through some inevitable process of socioeconomic evolution. It was done by people who knew what they were doing, had a fair idea of the misery they were inflicting, and proceeded to do it anyway. There was in most cases no excuse of survival or self-defence. The goal was wealth.

Most historians agree that the profits of the trade were a crucial element in providing Britain with the critical mass of capital that kick-started the industrial revolution. Britain’s position as the first industrial power, and subsequently one of the wealthiest countries in the world, rests upon this eye-watering level of exploitation and destruction. And my point? Anyone who has benefited from living in one of the wealthiest countries in the world, has benefited from the proceeds of slavery. The effect of slavery on the people of Africa and the West Indies (poverty, instability and dislocation) is the shadow side of the prosperity, stability and security that many British people have enjoyed, with occasional interruptions, since the 19th century. All of us who see ourselves as beneficiaries of this prosperity are beneficiaries of slavery, and it has been just as crucial to our wealth as a nation as it seems to have been to Mr Drax’s family wealth.

Attempts have been made to calculate the debt that this involves, in financial terms. That isn’t easy. But most of this happened in the last 300 years, so it isn’t impossible. The trade was catalogued by a commercial and financial system that was already efficient and sophisticated, and the records are there to be studied.

Of course, it’s difficult to say exactly how much any one of us has benefited from industrialisation, and therefore from slavery. There are lots of caveats. What would our history have been like without the slave trade? If we try to look at all the possible alternative histories that might have happened we go into an infinity of parallel universes. Also, our prosperity is compromised. It will not stretch very far into the future unless we do something about global warming. Nonetheless we can make a realistic assessment of the probable benefits we are experiencing at present. And we can be clear about certain things. We know that countries that have not industrialised tend to be poorer, and that the ‘advanced economies’ tend to be equated with industrial economies. We know what Britain was like before the industrial revolution, and we know that most Britons in that mainly agrarian and commercial economy were considerably poorer in material terms than most Britons are now. In its early days the industrial revolution was a horrible experience for many of our ancestors. But it’s reasonable to suppose that we are now better off as a result of industrialisation, and thus as a result of the Atlantic slave trade.

Apart from his wealth, status and power, Mr Drax is also unusual in another way. He knows the origin of his wealth. I wonder how many people in this country have fully registered the fact that our collective wealth has the same origin as his. It could be argued that we should not be expected to right old wrongs if we don’t know of their existence in the first place. Many of us are in that sense ’innocent’ in a way that Mr Drax is not. But when does innocence become wilful ignorance? The knowledge of the slave trade is out there, it’s a major part of our history and it’s easy to access. And it was forced on our attention last summer with the Black Lives Matter campaign, and particularly the incident of the Colston statue in Bristol. Ignorance is running out of rope as an excuse.

The complexities of compensation are mind-boggling: in what form should it be given, to whom, by whom, in what proportions, and how much? On the last question West Indian historian Sir Hilary Beckles suggests £50 Billion, but there are other estimates, a lot more and a lot less.  I’m not sure if we will be able to agree on a fair solution. But it’s a problem that belongs to all of us in Britain, not just Mr Drax. We need to think and talk about it a good deal more than we are doing. And if, as I suspect, much of the interest in Mr Drax was really about the gross inequality represented by his wealth, we should tackle that as a separate issue.  Our slave trade heritage deserves a clearly focused debate in its own terms.