Who started the politics of hate? Well, we all knew who re-started it. Mark Francois leads the charge of the hate brigade. 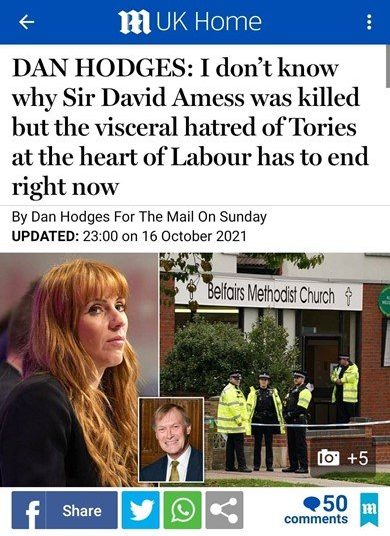 On Friday and over the weekend Central Bylines and the wider Bylines Network (like many news channels and pages), decided we would pull most posts or articles out of respect for David Amess MP and his family, friends and co-workers. This was the right thing to do and we stand by that. However, before the weekend was even over some of those often guilty of coarsening our public debate were off again.

Yes, by Sunday Dan Hodges of The Mail On Sunday was back on the front foot of hate. Squarely laying the blame at Labours door despite the suspect of this awful event being held under the Terrorism Act.

Ok, sit tight, it is just the Daily Mail after all. Yes, it might be the most widely read UK paper, but try not to react. Then on Monday, just days after his tragic death. Mark Francois MP (yes, he really is an MP) used his speech in Parliament to give his impersonation of a small but noisy attack dog.

Indeed, Mark Francois even offered to drag Facebook’s Mark Zuckerberg and Twitter’s Jack Dorsey into the House of Commons. Here’s how Twitter reacted as it was quick to remind Mark Francois of his own very history of toxic hate.

It didn’t take long for this threat to Steven Bray (who has protested against Brexit outside Parliament since 4th September 2017) to resurface. Mark Francois told this member of the public ‘we are signing your death warrant’.

Lloyd Hardy was one of the first to point out Mark’s hypocritical speech in Parliament.

Many were then quick to remind Francois of his Junker in the Bunker comments comparing Junker not only to Hitler but surely also to the way in which he died.

James Baker reminded us of this period when the standards expected of our MPs language and behaviour fell at surely their quickest ever rate. Certainly, during my lifetime.

Mark Francois has a bit of history with regards to female MPs, famously making a throat-slitting action aimed at the then Prime Minister, Theresa May in Parliament. I am no fan of Owen Jones but his prediction in this clip on the BBCs Politics Live programme of what would happen once they ousted Theresa May is pretty much spot on.

Not content with making threats at the Prime Minister, ex-territorial army member Francois then took on army General Sir Nick Carter, chief of the Defence Staff.

‘Can we just make a plea to you? You are the professional head of the armed forces.‘

‘Please nip back to the department and ask them to sort their bloody selves out, because if not, Cummings is going to come down there and sort you out his own way, and you won’t like it.’

At this point, we should highlight Marks outstanding military career where he read War Studies at King’s College London and had a ‘lengthy’ 4-year army career reaching the rank of Lieutenant in 1989 in the Royal Anglian Regiment‘s Reserves.

This compares to Sir Nick Carter who served in the cold war in Germany, during the troubles in Northern Ireland, with the UN in Cyprus and then in command of a battalion on operations in Bosnia and Kosovo. He later toured Iraq as brigade commander in 2003-4. On top of that Sir Nick made several Afghanistan tours between 2002 and 2013. He then went on to command 55,000 Nato troops, ultimately being made Chief of the Defence Staff in 2018

But who is Sir Nick Carter compared to Mark Francois!

For those of you that have forgotten how they have dragged this country into the gutter since June 2016, Liz Webster was quick to remind us it was not just Mark Francois, but many others too and any that were not onboard they hounded out as the Tory Party morphed into the BLUKIP/Vote Leave party.

So rather than try and offer an olive Branch, Francois has gone on to make a very clear threat of violence against the two largest social media world giants:

“If necessary kicking and screaming so they can look us all in the eye and account for their actions or rather their inactions that make them even richer than they already are.”

I would like to think that Mark Francois might take some time to reflect on the loss of his good friend over the next few days and realise he is part of the problem. But the reality is Mark won’t change, neither will many of his fellow party members or the daily headline writers on the Daily Mail and Daily Express. They are all exactly where they were on Friday morning before the awful events that would occur later that day.

No doubt if or when they table “Davids Law” it will be used against opponents to silence anyone who protests or opposes them. After all they recently tabled the idea of giving 14-year sentences to journalists who embarrass the government. Will printing this photo of Matt Hancock getting it away whilst we pay him and we all stayed at home during lockdown now land me in jail?

Thankfully Led By Donkeys live by the same rules of free speech that I do but just on a slightly grander scale! This one was spotted in my old home town of Brighton.

On a more serious note, mark my words, they are about to weaponize the very sad murder of Sir David Amess to try and push through “Davids Law” which will silence those of us that wish to hold them to account. But it might just make us stronger?

Of course, our thoughts still rest with his family and loved ones at this time, but I would ask David Amess’s work colleagues to look at the mote in their own eye before they look elsewhere.