If we believe the UK belongs at the heart of the EU then we need to be honest and say so, and not second-guess how that might 'play' politically

by Cliff Mitchell
in Brexit, Politics 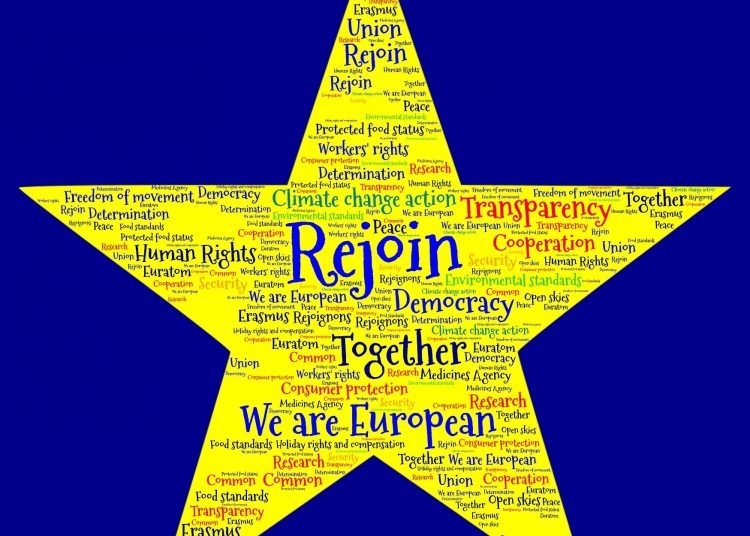 For many of us, it is axiomatic that leaving the EU was a huge mistake that will damage our country and diminish our rights as citizens. Our future, we believe, must be as part of the EU so we can work together to address the very real and massive issues we face nationally and internationally. The UK has the potential to be a real force for good in the world but not if we continue down a path of right-wing populism and English exceptionalism.

Some argue that now is not the time to campaign to rejoin the EU: it’s too soon, people have had enough of Brexit, we’ll be branded as sore ‘Remoaners’, we have to be patient, it’s going to be a long process to persuade public opinion of the case for rejoining.

Others argue that if we believe our future lies with the EU, we should say so now, loudly and clearly, giving like-minded people a rallying voice and hope for a better tomorrow.

Experience of street campaigning over recent years does suggest one thing: being crystal clear about your own position leads to a much more constructive debate with those who disagree. Your arguments are easily undermined if your position is unclear or ambiguous. Arguing for a People’s Vote for example was unconvincing and easily dismissed if you were unwilling to be clear about your own position on remain versus leave.

It’s also hard to be passionate about an ambiguous position. The Leave campaign was successful based on stirring people’s emotions rather than presenting data and rational argument and there is still plenty of passion generated by Brexit just waiting to be channelled. Can that passion be sustained over a long, steady campaign for gradual, closer alignment with the EU? Will it burn itself out in a short rejoin now campaign that may not be successful?

If we believe in the UK as a constructive partner in the biggest peace project in history, in working together with diverse people to make the world a better place, that the UK belongs at the heart of the EU, but we don’t say so, are we being dishonest and even unprincipled, leaving like-minded people feeling isolated?

We are not politicians,  probably don’t want to be, and shouldn’t try to be. We don’t have to adjust our position based on double guessing how our political opponents will respond to our next ten steps – leave that to the politicians, that’s their job. What we can do is be a voice for the huge number of ordinary people who are, like us, devastated at what has become of our country.

Hope and a vision for a better future are in short supply right now. Why are we not providing that? Do we not understand how powerful that could be?

We have a populist government committed to nothing except their own control of power, whatever that takes. But they are unbelievably incompetent and politics has never been so unpredictable. Brexit is an unfolding disaster, not the success Johnson and co. predicted or claimed, and populism around the world is not on the rise as Brexiteers expected – thank you Joe Biden, in particular. The Johnson government has, as a result, been wrong-footed and weakened. Right-wing populists, by definition, listen and pander to popular opinion. If popular opinion is that we would be better in the EU, then populist politicians like Johnson will listen. Our challenge is to channel public opinion to a shared rejoin position and we can’t do that if we remain silent or our stance is ambiguous or nuanced.

Perhaps we are also trying to be too smart. For most of us it’s not our job to be politicians and we are not equipped with the Machiavellian skills required of that role. Remember the simplistic, emotional messages used so successfully to win the Leave campaign? Our message as individuals does not have to be the same as the messages from the main political parties, or even the main pro-EU campaign groups. But we should be clear and uncomplicated Ideally, we should all align behind a common, grassroots message. Most can agree that life will be better for all of us, for our country, and indeed the world if we rejoin the EU and take back our place as a force for good – and we shouldn’t be afraid to say so.

So whether you think we should campaign to rejoin now, or take a more cautious, step-by-step approach of gradually moving closer to the EU, make your position clear and principled – that way you are much more likely to persuade others of the way forward.