Events around the small region of Nagorno Karabakh could be a ‘tinder box’ for a wider regional war involving Turkey, Russia and Syrian mercenaries, as well as the main opponents Armenia and Azerbaijan, with Iran watching events closely. 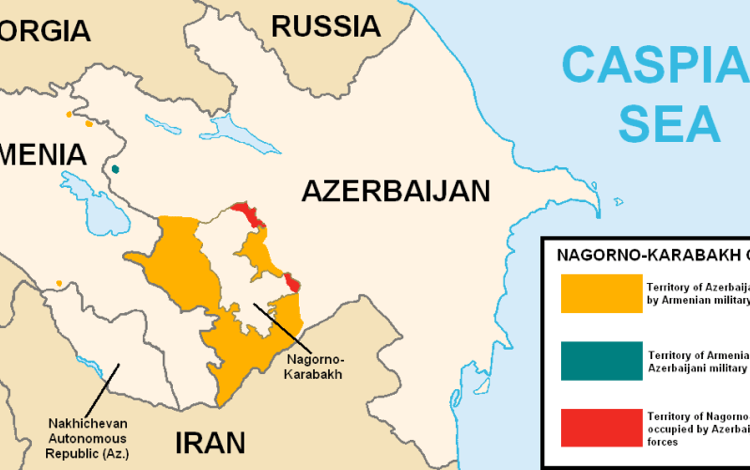 Source: Wikimedia. Note: East Midlands Bylines does not necessarily agree with the wording on this map

Events around the small region of Nagorno Karabakh could be a ‘tinder box’ for a wider regional war involving Turkey, Russia and Syrian mercenaries, as well as the main opponents Armenia and Azerbaijan, with Iran watching events closely.

But isn’t it all a long way off and yet another former Soviet Union war, though close to the Middle East this time? And why, on earth, should we care about concepts such as territorial integrity and self-determination which clash even though many nations say they support both?

Quick answers could be:  wanting peace in Europe and elsewhere, the disintegration of states and unions, nationalism, the United Kingdom, Ireland, Scotland and Brexit. These matters should concern us all.

I have written books and many articles on Azerbaijan and Armenia, travelling around both countries, sometimes flying directly to Baku or Yerevan, sometimes travelling over the border from Georgia. (I’ve not been into Nagorno Karabakh territory because, if they had stamped my passport, I would have been refused entry to Azerbaijan in the future.)

These three countries of Armenia, Azerbaijan and Georgia make up what is known to us as the ‘South Caucasus’. They were all part of the Soviet Union as Soviet Socialist Republics (SSRs) but at one time were united as the Transcaucasian Socialist Federative Soviet Republic. When they split into three SSRs the fact that Azerbaijanis, Armenians, Georgians and others did not fit neatly into regions or only marry ‘their own people’ was ignored because they were all governed by Moscow in a union, with freedom of movement.

Nevertheless, some regions within the three republics were made autonomous including Nagorno Karabakh, which had a majority Armenian population although it was surrounded by Azerbaijan. The name ‘Nagorno Karabakh’ comes from several languages and means ‘mountainous black garden’. Armenians often refer to it as Artsakh.

In the early nineties when the republics wanted independence and the Soviet Union dissolved, many autonomous regions wanted independence too but were denied. Wars broke out. Azerbaijanis were driven out of Nagorno Karabakh leaving the region mostly Armenian after a war from 1992 to 1994. There were many deaths and accusations of ‘ethnic cleansing’. Eventually fighting stopped and the conflicts became ‘frozen’ (or not).

During the Nagorno Karabakh war much Azerbaijani territory around the region was occupied by Armenia and still is, known as the ‘occupied territories’ (see map). There have been soldiers stationed along ‘the line of contact’ ever since. Nagorno Karabakh continues to be self-governed with help from Armenia, but no UN state recognizes it as independent.

There has been a peace process since the 1990s with Russia, the US and France as OSCE ‘Minsk group’ co-chairs. And the matter could have been settled a long time ago, with the ‘Madrid principles’ but it hasn’t. There have often been ‘skirmishes’ along the contact lines and long-term President Aliyev of Azerbaijan has sometimes threatened war to, at least, get back the territory around Nagorno Karabakh. He has been stockpiling arms from Israel, probably bought with oil money, for a long time.

Actual war ‘broke out’ on 27 September 2020 and we all knew from the start that this was different. At a time when Covid-19 is global; there is a presidential election in the US; Belarus, which is also in the EU’s neighbourhood programme and close to Russia, is crying out for help; and it is not yet winter, Aliyev seized his opportunity, as strongman opportunists will (though he would say he has been very patient).

As always there is a ‘fog of war’ with huge amounts of propaganda and everyone blaming everyone else. Armenians say that Turkey has pushed Azerbaijan into this conflict and there are ‘jihadists’ and ‘terrorists’ from Syria and other countries involved. After the Armenian ‘genocide’ they fear Turkey and are afraid of ‘Ottoman Empire 2’.

Azerbaijanis say Armenia will never give up Nagorno Karabakh or even the occupied territories without a war and the international community is ignoring UN resolutions. They say there are one million IDPs (internal refugees) waiting to go home.

So, what about support from the neighbours? Iran tends to get on better with Armenia than Azerbaijan. Turkey is strongly supportive of Azerbaijan and receives oil and gas via Georgia (which stays neutral but supports territorial integrity because of its own ‘frozen conflicts’). The Kurds support Armenia.

Russia and Armenia are both part of the CSTO security organisation so Russia would be obliged to defend Armenia (not Armenians elsewhere) if it were to be attacked. It has troops stationed there. But it needs good relations with Azerbaijan and to be seen as a mediator even though it has had an interest (so far) in keeping the conflict alive but frozen. Now it fears Muslim fighters in the region, especially given the proximity of Azerbaijan to Chechnya.

So why does this matter, other than the humanitarian side? Because it is a tale of what happens, even decades later, when a union disintegrates. In this case it’s the Soviet Union but we should also remember Yugoslavia and not be so keen to break up the European Union or indeed the United Kingdom, at least not without all parties agreeing.