Lis Crosbie and Lyn Dade are co-founders of Reboot GB which believes in change and reforms to make the country fairer.

by Liz Crosbie
in Politics, UK 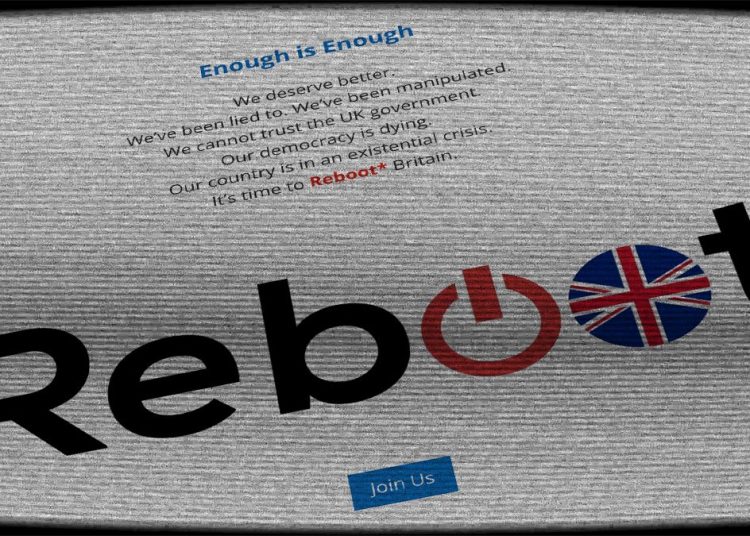 In 2019, political processes and opposition seemed to have crashed. The idea of rebooting to counter the blue screen of death was born. Talks about a possible intervention began during the autumn of chaos 2019 when the Johnson/Cummings/Bannon/Alt-Right agenda became apparent. After the GE in 2019, things got serious. It was clear that the political parties were part of the problem. What was needed was an analysis and an agenda that would begin to reclaim politics from the political parties and force the ‘progressive’ parties into a Progressive Alliance.

Liz Crosbie and Lyn Dade, co-founders of Reboot*, have form as campaigners. They first met in 1989 when Liz was co-chair of the Green Party and headhunted Lyn to work on communications for the party’s 1989 European Election campaign. The result was 15% of the vote from a previous poll percentage “too small to measure”. Suddenly, the party was in the spotlight with little capacity to cope. With Liz and others, Lyn went on to co-ordinate an internal campaign to elect a decision-making Executive, Green 2000. It was successful, but the process was bruising. Both Liz and Lyn swore off party politics. They left the Greens in 1991, Liz to run her strategy business, and Lyn to work for Charter88, the constitutional reform campaign. But they stayed friends and would get together every so often to moan about the UK going to hell in a handcart.

There have been unsuccessful attempts to form such an alliance before. In 2019, the LibDems and Greens had participated in a handful of constituencies. The Labour party had set its face against such arrangements. Therefore, most non-party initiatives were concentrated on the Labour party, particularly on persuading the leadership to accept the need for Proportional Representation, which is rightly seen as opening the door to a more representative politics. There is, however, no clear strategy around what such a government might achieve beyond a simple vision of enacting one piece of legislation – tointroduce a PR system – and then dissolving to allow for another GE.

That mantra was less than satisfactory pre-covid and looks highly irresponsible in early 2021. The UK’s problems are not just democratic but structural, social and economic, problems and divisions which the pandemic has exacerbated. The over-arching climate crisis only adds urgency to the need for radical change. Reboot* believes change must be rooted in a debate about what kind of country Progressives want to build and what values they prioritise.

Reboot’s TEN actions have been chosen as an inter-connected framework to rebuild Britain’s political ecology. They are reforms to make the country fairer and genuinely respectful of the values of liberal democracy. Reboot* believes the TEN could transform the UK socially, economically and constitutionally and make it fit for the 21st Century.

These changes can be debated and disputed, but the values they are rooted in are shared by all Progressives – fairness, respect, citizenship, participation and caring. Such a programme for the first term of an Alliance government would shift the country’s centre of gravity, moving us away from the market’s greed and ‘casino capitalism’, building up both people and the planet’s well-being. The TEN allow people across these islands to be represented and invested in rebuilding this country.

Reboot* is not a party; instead, it is a potential rallying point and meeting place — a place for single-issue campaigns concerned with democracy, social justice, the climate crisis; for individuals who are frightened for their future and that of the country, to be supported. Together we can take action.

It is simply a beginning, an idealistic start of what we can make into a realistic plan. The pandemic has wiped out many of the old certainties, and there is little desire to return to “normal”. Most people want to see a fairer society. Reboot* is going to kick-start that process.

Find out more by visiting www.rebootgb.today

Editor’s Note: we plan to cover various campaigns emerging from the damaged politics of recent years. Watch this space. We have previously featured an interview with Anna Bird, the new CEO of the European Movement UK and will shortly be covering EM UKs recent conference.

Home Office hubris, hulks and cutting off your nose to spite your face. Why are we treating asylum-seekers so badly?