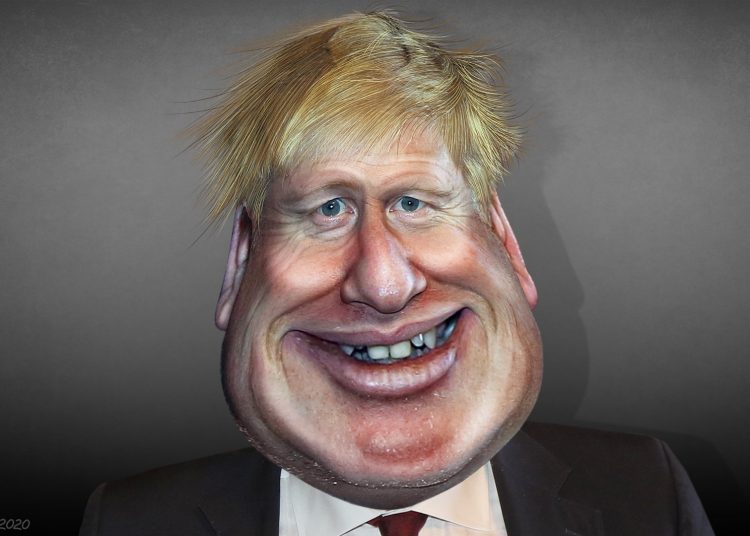 "Boris Johnson - Caricature" by DonkeyHotey is licensed under CC BY 2.0

Today at PMQs Keir Starmer referenced a Wellingborough Conservative party December newsletter. EM Bylines has obtained it and would like to share a little of it with you about Tory party recommended tactics to fool gullible people in a Trumpian way.

They advise candidates to behave like stand-up comedians. EM Bylines can think of one or two Tory comedians at the highest level.

Here is the appropriate section:

Stand-up comedians have the answer to Fake News. They all have to learn how to deal with loudmouth hecklers in the audience. It they don’t learn, then their careers die very quickly.

“You say the first thing that comes into your head.”

It’ll probably be nonsense, but it knocks your opponent out of his stride and takes away his headline. You then have a few seconds (possibly minutes) to reword it, say that you mis-spoke, were mis-heard, or whatever.

You may get a bad headline saying that you spoke something silly, but you can live that down. Meanwhile your opponent is knocked off the news-feed.

It runs counter to everything that traditional politicians are taught – viz. never say anything that is not 100% accurate. The problem is that 100% right, two weeks late equals defeat.

Sir Keir said: “I for one often wonder where the Prime Minister gets his advice from. Well now I know, because I have here the official newsletter of the Wellingborough Conservative Party. It’s not on everybody’s Christmas reading list, but it is a fascinating read because it gives a lot of advice to wannabe politicians.

“It advises: ‘say the first thing that comes into your head, it will probably be nonsense and you may get a bad headline but if you make enough dubious claims fast enough you can get away with it’.

“So my final question to the PM is this, is he the inspiration for the newsletter, or is he the author?”