Joe Stanley makes the case for action on climate change, and argues that a focus on cows misses the point. 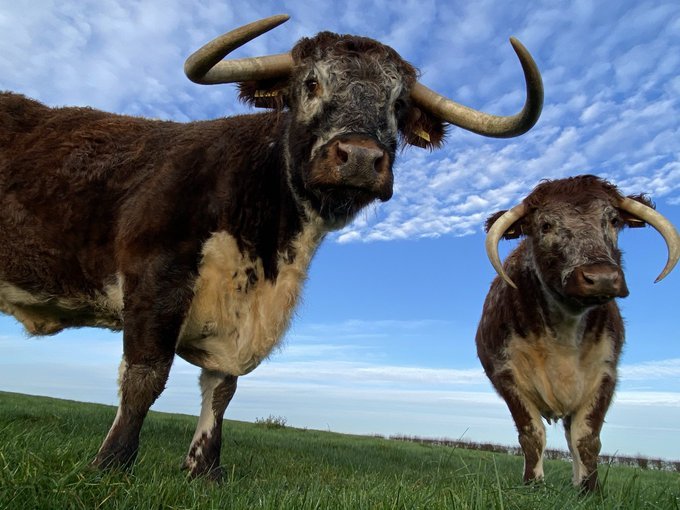 A recent thread by Joe Stanley on Twitter caught our eye, and Joe has given us permission to reproduce it here. This is important as COP26 is underway in Glasgow and as British agriculture is squeezed by Brexit, climate unfriendly trade deals and withdrawals of government support.

The world has warmed >1°c since the mid-C18th as a result of the anthropogenic (human) release of greenhouse gasses into the atmosphere. This is already having devastating consequences around the world: just ask almost any farmer.

…in parallel with our industrial emissions. Humans are the problem.

Where do the vast majority of these emissions come from? The burning of fossil fuels for energy to generate electricity, power our transport, produce our consumer goods and heat our homes.

Climate change is already happening, but to keep it at ‘manageable’ levels, we must keep warming below 1.5°c Current international commitments leave us closer to 3°c by 2100. This would be disastrous. Think Mad Max.

But – isn’t it COWS that are actually the single biggest source of climate-warming emissions? I mean, that’s what the media says, right? All we need to do is move to a ‘plant based diet’ to save the planet, right? No. This is misleading, and dangerous.

They emit methane (CH4) from enteric fermentation as they ruminate – or chew the cud. (Cows are clearly thoughtful animals). Essentially, CH4 is a by-product of converting pretty indigestible (to us) grass into tasty beef & milk.

Methane is 28x more warming than CO2; this is important for farming because agriculture contributes more than half of all methane in the UK, primarily from ruminant digestion. But: CH4 also breaks down after c10 years, vs centuries for CO2.

The warming potential of methane is calculated using the GWP100 metric, which assumes that CO2 has a warming score of 1, CH4 of 28 over 100 years (ie is 28x more warming over a century). But this dismisses the fact that methane is a short-lived gas, inflating its impact.

What’s more, the CH4 emitted by cattle (biogenic) is different to that released in the burning of fossil fuels. It’s part of the natural carbon cycle, where CH4 is broken down after 10 years into CO2, which is in turn recycled via photosynthesis & further rumination.

That makes biogenic methane a ‘flow gas’ – after ten years, a static population of cattle is creating no new warming as the gas constantly cycles. In contrast, ‘stock gas’ CO2 remains in the atmosphere for centuries, adding constant warming with every year that passes.

That’s why, despite the pandemic, atmospheric CO2 reached record levels in 2020. Every tonne of CO2 which is burned is adding warming, and will do for centuries. We would need to stop burning fossil fuels tomorrow – totally – to arrest this rise.

It’s also worth noting that the biggest global emitter of methane is (of course) the fossil fuel industry. And unlike biogenic methane, this CH4 was safely buried, inert, in the ground (along with all that CO2) before we dug it up and flared it into the atmosphere.

With cattle, were we to make the national herd more efficient, or reduce their emissions through breeding/diet, we could (after a decade) induce a COOLING effect on the climate as that biogenic methane breaks down and is sequestered in biomass & soil.

Additionally, not all livestock production is the same: it’s a sliding global scale of sustainability. Beef produced in the ashes of the Amazon is unacceptable, for emissions & biodiversity reasons. The grains fed in large global feedlots are also problematic.

But British meat and dairy has a great story to tell, and is improving all the time in line with our Net Zero ambition. If you want to reduce your consumption of unsustainable meat & dairy, just look to buy British. It’s high welfare, and ethical too.

Why does this matter for #COP26 ? Because if people are led to believe that going ‘meat free’ is making a meaningful contribution to the existential threat posed by climate change, they’re mistaken. This distracts us from the bigger challenges we face and reduces action.

And make no mistake, the consequences of failing to mitigate the worst excesses of anthropogenic climate change are truly dire.

It also goes without saying that red meat and dairy are vital in balanced, healthy diets the world over.

And let’s not forget – ANY food has an environmental footprint and can be produced on a sliding scale of sustainability. Even the much lauded avocado can have a catastrophic impact on the environment, biodiversity & local communities.

Sustainable farming – including livestock – is part of the solution to climate change, and I’m proud to be part of an industry which has a plan to achieve that with real activities, not just ‘offsetting’ and continuing business as usual.

It’s time we stopped repeating the tired cliches about farting cows being the root cause of climate change. Even using the flawed GWP100, ruminants DON’T account for 94% of the emissions in the economy. It’s not the cows, stupid. It’s the everything else.