Do we think that capitalism is being used to strengthen our democracy? 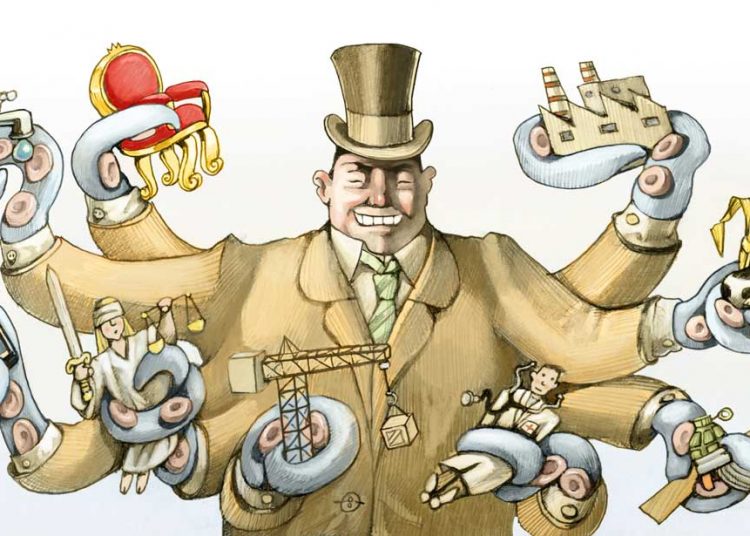 A friend of mine from the north of England once asked me if I’d seen War Horse. The way he pronounced ‘war’ sounded like ‘our’ to me, so quick as a flash, I joked that I didn’t even know he had a horse. I thought this was hilarious but, unfortunately, he didn’t. When you have to explain the joke, it stops being funny.

Not having to explain themselves also suits those who would rather wage war than make jokes. Tony Blair’s support for the 2003 Iraq war, with all its controversy over the weapons of mass destruction is a prime example.

Perhaps there is only ever one over-riding motive. The 1976 film All the President’s Men, with its ‘follow the money’ hook, suggests that everything leads to greed.

Chaos is a ladder

The centre and the left have been complacent, believing that democracy trumps capitalism and will stand as our last line of defence against greed and corruption.

Do we naively believe that capitalism (as currently pursued by the few, for the few) rests on a Keynesian economic system, complete with a good British sense of fair play? Do we think that capitalism is being used to strengthen our democracy?

This illustration (published in 1911) suggests that stability suits the capitalist system. Today, however, stability clearly doesn’t deliver enough for our new breed of capitalist leaders.

They prefer far more extreme systems, including disaster capitalism (as espoused by Jacob’s father William Rees-Mogg) and even warlord capitalism. The former is concerned with actively shocking the status quo in the knowledge that supernormal profits will be made by those canny enough to spot the opportunities. The latter is a more determined dismantling of the structures intended to provide economic protection and stability, to protect us against boom and bust.

These extreme capitalists use a variety of increasingly-familiar techniques to gain control: populism, culture wars and the scape-goating of any convenient group. They are not concerned with perfecting our democracy. On the contrary, they see democracy as an obstacle to their one pure goal – the pursuit of money.

The regressive effect of capitalism was most starkly articulated by Mike Lee (Republican Senator for Utah) when he claimed “democracy is not the objective” of the US political system, “liberty, peace, and prosperity are”. We can surely be certain that ‘the many’ will have little say in the running of that free, peaceful and prosperous future.

It is ironic that those who most threaten the peace of our democracy employ the imagery and language of war to distract us from the real destruction that they desire. Harmless nostalgia is whipped up into frenzied nationalism, and economic migrants are considered to be ‘our enemies at the gate’.

The culture war tends to go on in plain sight and feels very real, but the threat to our democracy and to our order is mainly overlooked. That is where the real threat lies.

The national motto of Brazil includes probably the best-known idiom of positivism “Love as a principle and order as the basis; progress the goal”. Whatever the difficulties of Brazil’s current situation, we need its guiding principle more than ever.

If we are to break the cycle of decline of our democracy, we have to reach further for solutions. We cannot allow those with their hands on the levers of power to move us away from the principles that protect ‘the many’ or the cornerstones that support those principles.

We should be actively working to perfect our democracy and not accept one of the worst electoral systems in Europe. Are we turning into a country where aiming for a level playing field is seen, not as fair and just, but as an act of extreme socialism? We’re told to strive for wealth as the opposite of poverty. But the opposite of poverty is equality of opportunity.

The Covid-19 pandemic could have been an opportunity to improve equality. Instead, we experienced the usual opportunism with wartime-style spivs and cronyism even at the highest levels of government.

When both Covid-19 and Brexit have done their worst, we will need time to heal. A good dose of accountability and justice would help enormously. We need more truth, a more independent press, better tools for managing social media and, ultimately, we need a far better polity.

I look forward to a time of truth and reconciliation. For the moment, our work to reduce disorder and disinformation has never been more important.