Adam Colclough reports on a vigil for Ukraine in Hanley 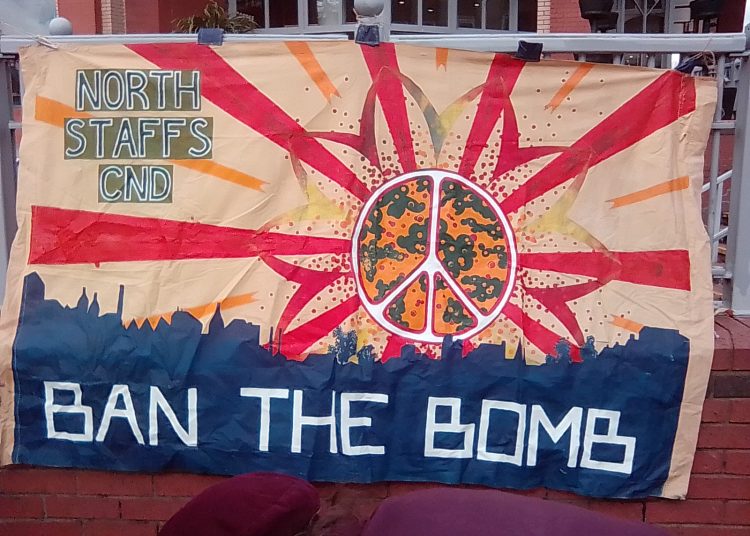 Around forty people gathered in Hanley, Stoke-on-Trent on Saturday to take part in a vigil calling for an end to the Russian invasion of Ukraine.

The event held at the blue clock outside the Potteries Shopping Centre was jointly sponsored by South Cheshire and North Staffordshire CND (SCANS CND), local anti-racism campaign group NORSCARF and North Staffs Green Party, all of whom are members of the Ukraine Solidarity North Staffs group.

It was part of a second national day of action called by the Stop the War Coalition and the Campaign for Nuclear Disarmament.

At the Hanley vigil Jason Hill from SCANS CND said the war in Ukraine had brought with it a real risk that nuclear weapons could be used. He also accused the Russians of committing ‘grotesque crimes against humanity’ by bombing hospitals and other civilian targets.

All three speakers addressed the failure of the government to allow refugees from the conflict to be given visas for entry to the UK.

Dave Liddon of NORSCARF spoke about the comments made by government minister Kevin Foster that refugees could use the visa arrangements for seasonal workers to enter the UK and comments made by Home Secretary Priti Patel that the bureaucracy around granting visas was necessary to prevent the system being exploited by people who were not genuine refugees.

He linked this to what he called a ‘stench of hypocrisy and racism’ in the attitude of the government towards people seeking asylum. This point was echoed by the speaker from North Staffs Green Party, who described the current asylum system as ‘broken and unfair’,  trapping claimants in an ‘iron cage of bureaucracy’.

The speaker from North Staffs Greens contrasted the generosity shown by ordinary people who have raised money for Ukraine and the failure of the government to ‘recognize the gravity of the situation’ and to ‘empathise’ with the suffering of refugees.

He went on to say that the situation in Ukraine had shown that there is ‘no high ground the tide of war cannot reach’ and that a ‘people’s movement for peace and social justice’ was needed to speak up for refugees from all conflicts.

The government has relaxed some visa restrictions for refugees from Ukraine coming into the UK. These changes have been welcomed by groups campaigning for refugee rights, but they say they do not go far enough.

Andy Hewett, Head of Advocacy at the Refugee Council said, “Rather than continuing with a system that requires Ukrainian refugees to apply for a visa, the Government urgently needs to temporarily waive visa requirements so that all Ukrainian families fleeing war and bloodshed can easily reach the UK and access the protection that is their fundamental right under the Refugee Convention.”

Plans are set to be announced by the government next week to allow people to sponsor refugees from the war in Ukraine to live in their homes.

The Ukraine Solidarity North Staffs group will be continuing to organise fundraising and protest activities’ and publishing regular updates on their Facebook page.