A headteacher records the trials and tribulations of managing a school during the Covid pandemic in the first of three parts.

by Central Bylines Team
in UK 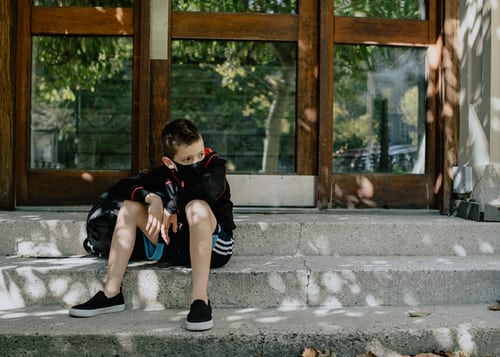 Trial of a Headteacher during covid, Photo Kelly Sikkema Unsplash

Headteacher Face to face with Covid

In a three-part series of articles, a Midlands junior school headteacher gives an insider’s account of what it was like responding to the biggest public health emergency for decades.  It provides a detailed insight into what happened, how schools had to respond and the pressures that were faced by staff.

To begin at the beginning

The 2019-2020 academic year started like all school years; a whole year planned of activities – curriculum, parents evenings, concerts, assemblies, fundraising events. The Autumn Term progressed in its usual way and we finished for the Christmas holidays with our usual festivities. I, like many people, watched the news over the holidays reporting events in China. I recall seeing diggers rapidly building hospitals for a disease which was beginning to spread. I was not particularly concerned – my first headship (as Acting Headteacher) was during the brief scare of swine flu. I had created a brief information document for parents, but other than that, nothing. I remember thinking that I could dust off this document, re-name it, and send it out to parents.

The Spring Term started in January 2020, and apart from low-level muttering on social media from some teaching unions, school life continued as normal. By March 2020 however, the noise from the teaching unions was becoming somewhat louder. There was much speculation on social media as to what the government should or should not do. Some staff and parents were beginning to get worried; however we continued doing what we usually do. The last event we held was Pig Racing!  Wooden pigs were raced against each other by people pulling on ropes. This generated much laughter. That was the last time that life at school was anything resembling normal.

On Wednesday 18th March 2020, my staff and I sat in the school hall and watched Boris Johnson make his speech closing schools from the 20th. It was a most surreal experience, trying to take in the enormity of what he was saying. In effect we had two school days (four if you include the weekend) to create a completely new way of working – opening only for vulnerable children and children of key workers, whilst simultaneously providing learning activities for all other pupils. I left school that evening with my head buzzing with all the things that needed to be done.

I arrived at school on the Thursday and set to with huge to-do lists! Thankfully, the Deputy Headteacher had also spent the evening thinking, and had come up with the beginnings of a system which could be used to enable all children to continue with their learning and a booking system for parents for them to tell us if they thought they were eligible for an on-site place and also to book in each week. The Deputy Headteacher and I asked the staff to ‘trust us’ to let them know details by the end of that day. We organised supply cover for the Deputy, and she and I sat in my office for the whole day and well into the evening organising the teaching and learning side of things (staff rotas for on-site provision, how teaching and learning would work and how to teach children both in school and out-of-school simultaneously) and all the Health and Safety aspects (how to keep staff and children safe, purchasing PPE equipment and extra cleaning materials, all of which had suddenly either gone up in price or were no longer available).

I created a daily tick sheet for all staff to use to ensure that the exact same procedures would be followed, no matter which staff were in school. I liaised with our food providers and I worked out a system for providing food for those children who were entitled to free school meals and would be on-site, as well as how other eligible children could purchase lunches when they were booked to be on-site.

I created a system to ensure that vulnerable families and children would be supported and safeguarded whilst school was shut and an in-depth document for all staff with regards to how the on-site provision would work. I drew up guidance for parents which gave details such as how they could book the on-site sessions or drop off and collect their children. This document also gave information to all those who were not eligible to send their children to school. Less than 24 hours after Boris Johnson’s speech, we had worked out entirely new systems. We met with all staff and explained how everything would work. The staff came up with solutions to any gaps and were totally on board with everything.

The Department for Education (DfE), on the other hand, did not produce the all-important list of which people were classed as ‘key workers’. That crucial information was given to schools very late. The system which the government had supposedly set up to provide food for children entitled to ‘free school meals’, was also not working correctly. Social media showed some very, very frustrated Headteachers who were having no success in accessing the system. When information and ‘guidance’ from the DfE started to appear in my email inbox, there was a lot to try and understand, in a very short space of time.

Flying by the seat of your pants

On Friday 20th March, the Deputy briefly went to the local Infant School to liaise with them in terms of which families were eligible to attend on-site education. We needed to be sure that both schools were in agreement if there were children endeavouring to attend both schools. I made contact with the local Secondary School to share what we were doing. However, it soon became apparent that their systems were far more complicated than ours, although, on the whole we were thinking on the same lines. I talked the Chair of Governors through all the policies and procedures we had created. Then I put the finishing touches to the document for parents while the Deputy met with the whole school and explained to the children what was happening. Whilst I ventured in to hear what was being said, I honestly couldn’t go to the front and do it myself – emotions were running so very high, and I really didn’t feel that I could speak to all the children without crying. The Deputy headteacher did a fantastic job, but many children and staff were like myself – upset, scared, unsure.

The enormity of what we were being asked to do, had begun to hit home. The weight of responsibility settled on me very heavily. The decisions I made as to how the school would be run would not only be scrutinised by many people, but my decisions could mean the difference between people catching Covid-19 or not. Get things wrong and I was potentially putting staff lives in danger. This was not helped by the emails that I was beginning to receive from various teaching unions. Some of these made it blatantly clear that they would hold Headteachers personally responsible, should any staff become ill due to Covid-19.

As the day was drawing to a close, we made the decision to carry out our usual end-of-year tradition whereby the whole school creates a ‘tunnel’ to clap and cheer our Year 6 children off the school premises. This is usually done on the very last day of the academic year and is a very important rite of passage for our leaving children. As we had no idea when school would be open again, we felt it right to hold this event for our Year 6. There were many, many parents outside the school – far more than on a normal Friday. Some had read the document I had sent out earlier. Some had more questions for me. Many wanted to know how long this would last. Many seemed shell-shocked.

Staff lingered longer than usual that evening. The hall was set up for the children attending school on the Monday. All cleaning equipment had been sorted, rotas organised and important information put up in the staffroom. As we said goodbye to each other, we all realised that we had absolutely no idea when we would all be back in the building at the same time again. I stayed longer. I talked to the cleaners and checked they were ok with the new schedule and the important tasks that they had been given. I read and re-read all that I had written and organised. Knowing that there was nothing more I could do, I left for home.