Pippa Musgrave discusses how metric measures came about and whether a return to imperial measures is a good thing. 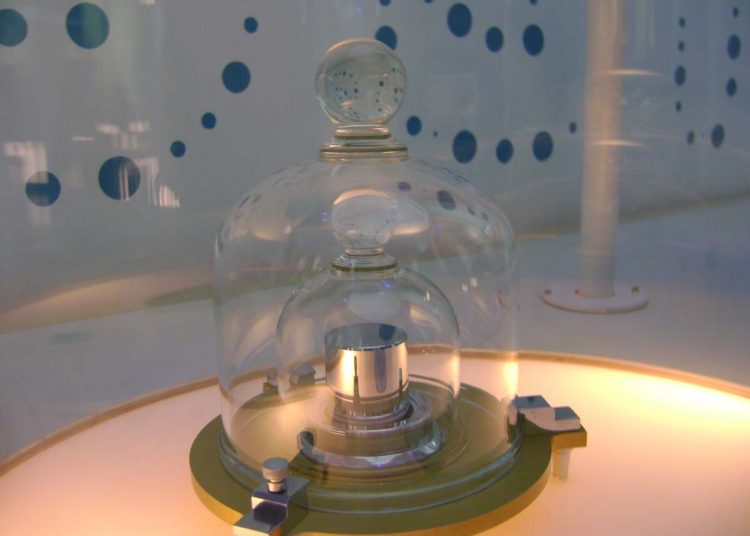 A replica of the prototype of the kilogram at the Cité des Sciences et de l’Industrie, Paris, France. CC BY-SA 3.0

In 2016, during the Brexit referendum campaign, we heard the term ‘Global Britain’ uttered by a multitude of Leave campaigners. Leaving the EU would allow the UK to rid itself of outdated EU bureaucracy. We were to become a thrusting player in international trade. We would stride around the globe as the cheerleader for a low tax, low regulation, modern economy.

So, it is very strange that, this past weekend, prime minister Boris Johnson announced that as a treat for the Queen’s Platinum Jubilee, he was going to bring back the use of imperial weight and measures for use in trade. This he said would remove an imposition placed on the UK by those nasty coves in Brussels.

This policy is directly at odds with the supposed globalisation aims of Brexit. Currently, only two countries in the world have measurement systems based on the imperial system, Myanmar (Burma) and the United States. The US imperial system differs slightly from the old UK avoir du pois imperial system. For example, the US pint has 18 fluid ounces, the UK pint has 20 fluid ounces.

The reintroduction of imperial units is not the globalisation of trade, it is a return to an outdated and arcane measurement system, it imposes additional costs and bureaucracy on UK businesses, and it is an isolationist move.

Of course, what Boris Johnson is actually doing is engaging in his favoured political strategy of ‘flinging a dead cat’. This is the manoeuvre that when you are in trouble, you reach into the Downing Street policy recycling bin, stretch your hand past the discarded Stilton and empty bottles of claret to grab a decomposing feline. You then slam the corpse onto the dining table with the hope that the sight of oozing entrails and the appalling stench distract the public from your indiscretions.

Johnson has chosen to weaponise nostalgia, a wholly inaccurate method of looking to the past.

Johnson’s grand Jubilee gesture is not about how we measure the goods we buy. It is a distraction from the fact that he has been caught lying to parliament and that Number Ten more closely resembles a stag weekend in Faliraki than a seat of government.

The news that yet another party was held in the Downing Street flat directly after Johnson was “ambushed by a cake” may be behind the imperial measures’ announcement.

However, Johnson has two problems with his use of this deceased feline. The first is that the UK’s decision to convert to the metric system had very little to do with our EU membership.

The second is that Johnson has flung it before. It is not that long ago when he was describing the benefits of buying champagne in pint bottles and that he would reverse the nasty EU practice of replacing the crown stamp on pub pint pots with the horrible CE mark. Boris seems to forget the second part of the dead cat stratagem: that they only bounce once.

History of how Britain came to use the metric system

For the benefit of the prime minister, although he is unlikely to read this article, here is the truth of Britain’s journey to the metric system.

In 1875, the UK parliament passed a Weights and Measures Act which allowed, for the first time, metric units such as the kilogram to be used in trade.

In 1884, the UK became a signatory to the METRE convention. This is the international treaty declaring a single worldwide system of measurement. This system, known as SI units of measurement, includes the metre, litre and kilogram. It also includes other measures such as the Joule for energy, the Newton for force and the Ampere for electrical current.

Clearly, metrication is a long-standing UK government policy position dating back to the middle of the 19th century.

Now it is true that the UK was a laggard when it came to metrication. Only after World War Two did the process again accelerate. In 1963, Harold Wilson made his ‘white heat of technology’ speech. The Wilson government aimed to modernise Britain and at the centre of this modernisation was abolition of imperial units of measurement. The UK Metrication Board was created and tasked with moving the UK to the metric system. A new Weights and Measures Act became law. UK metrological standards, including those for the pound and the yard would be classified in relation to the relevant international metric standards. This latter move was described as already making the UK a metric country.

It is worth noting that 1963 is a full decade before the UK’s accession to the EEC.

For a dead cat strategy to be effective, it is best that there is a hint of truth hidden amongst the decomposing remains. It is true to say that the EU does have an interest in matters metrological. Units of measurement were discussed during the UK/EEC accession negotiations of 1971. This was a minor part of the negotiations and as the UK had already set out a timetable to go metric, there was no controversy and general agreement on the matter.

In 1999, with the Millennium approaching, the Blair government also had a modernisation agenda and looked to remove the last vestiges of imperial measurements from UK trade. This related to the sale of goods from bulk such as buying a cut of meat from the butcher or putting fuel into your car at a filling station. Prices would have to be declared in metric units and retailers would need to use metric weighing and measuring equipment. This was achieved using domestic UK legislation with no EU involvement.

Coincidently, as the Blair government was legislating, the EU decided to open a single market in the certification and verification of metrological equipment. Equipment manufacturers could now get certificates of approval from any EU state and install their products anywhere in the EU. They no longer needed to get approval from each member state. They could shop around for the best certification price. This meant that there had to be a single verification mark.

The UK crown stamp will now need to return, not because we have removed EU bureaucracy but because we have left the single market for metrology and can no longer use the CE mark to verify the accuracy of metrological equipment. This represents additional costs and a lack of choice to industry, not a freedom.

In 2007, a draft EU directive was published which proposed a ban on secondary indications of quantity on regulated packages. This is pre-packed goods in containers filled in relation to the average quantity regime. Such packages had been metric since 1988. This directive was ceased on by imperial fanatics in the UK as the EU imposing law on the UK. However, the secondary indications clause in the directive was never brought into force and soon after it was revoked.

Is returning to imperial measures beneficial for Britain?

It is interesting that the language relating to Johnson’s announcement has changed. The prime minister spoke in bold terms that he was bringing back imperial. However later communications talked of ‘holding a review’ as to how imperial could be brought back. It appears the backtracking has begun.

What is clear is that the metrology industry has no appetite for the return of imperial measures. Re-certification of equipment in imperial units will be incredibly costly and as most businesses in the sector are multinationals, they do not want to cater separately for a ‘small’ market like the UK.

Weights and measures inspection is the responsibility of local authority trading standards departments. Some of these have suffered budget cuts of up to 70% in the last decade. Old imperial standards have been sold off and we as a nation have, in my experience, a critical shortage of weights and measures inspectors. To give some idea of the costs which will be handed to local governments, a local standard mass comparator, used to verify trade weights, costs upwards of £30,000.

Operating two measurement systems simultaneously can also be dangerous. In 2008, there was a red notice across the NHS instructing surgeries and hospitals to ensure they had accurate patient weighing equipment. The source of this notice was the death of a teenager who had been given an overdose of cancer medication.

The teenager had been weighed on inaccurate imperial scales and the incorrect metric dosage of medication had been given.

Perhaps a good reason not to step back in time?

Trading law compliance and marketing consultant based in Shrewsbury.