The Prehistory of Brexit

The pre-history of Brexit spans a satirical take of British history, and England's long history of "independence" 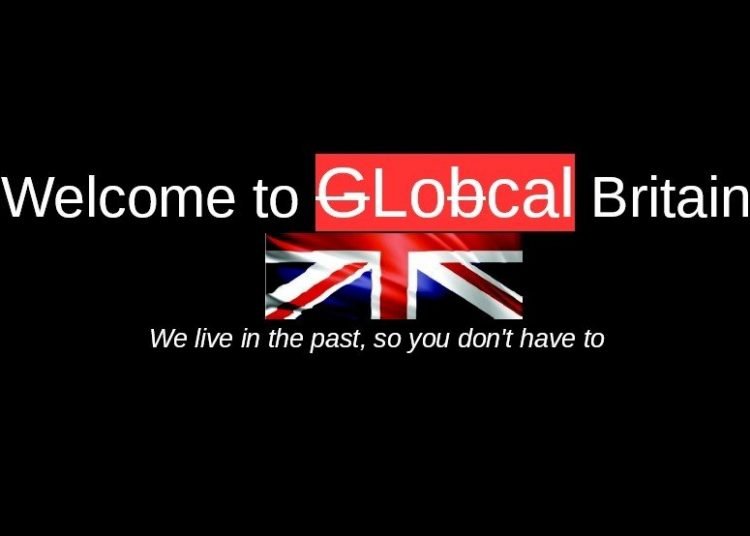 Humans all come from the same stock, the same place, the same gene pool. We so-called modern humans (Homo Sapiens[1]) all have common ancestors, all the way back in the mists of time, coming from the Great Rift Valley of Africa.

All except a few – in their own opinion, that is. They believe they are exceptional and so should be immune from mixing with the lower orders. These plucky contrarians and grumps constantly complain that new arrivals are sending the place to the dogs, and move on every time someone arrives seeking fresh fields, pastures new or flogging a new cuisine (a process now known as white flight), pushed ever onwards by human migration and mixing.

On and on they moved, until they reached a rich and fertile land called Doggerland, which, fortunately for them, was flooded after the last ice age, leaving them happily alone on a little island called Britain: leaving the tide of human progress for refuge on a small, wet, and windy island in the North Atlantic.

Until someone invented boats, and the neighbourhood went to the dogs, and there was nowhere left to go until someone invented sailing, when the more curmudgeonly and conservative among them took ship for the ‘New World’ in the Mayflower, where they have been causing trouble ever since, indulging in some of the more extreme forms of religious bigotry. Others headed back where the ancestors they don’t actually believe in came from, claiming to be on a mission to ‘civilise’ them and causing even worse trouble.

These supposedly superior beings stubbornly persisted in a world for which they were not adapted, dependent for their survival on a creature known as ‘Nanny’, a sort of Remora-like parasite. Their offspring, with a mutant gene for receding chins and a difficulty pronouncing the letter ‘r’, must presumably at some point have mated with modern humans. They (let’s call them Homo Euroscepticus) are on the face of it mostly indistinguishable from Homo Sapiens, unless they have been to public school and/or have many ancestors among the fox-hunting Anglo-Norman landed aristocracy (these people can be easily spotted by their twittery).

How exactly they ended up in England is a story lost in time, but we can perhaps speculate that they voted time and time again to leave their tribes and move to pastures new, where no one spoke foreign or ate strange food.

This worked for a while until some damn foreigner invented the coracle.

It is indisputable that, despite severe challenges to their survival (deriving from their parasitic dependency on nannies and serfs) their descendants have caused massive problems for humanity through the ages. They are particularly prone to conservative values and dislike foreigners, those of the wrong class, or who wear the wrong school tie. Many hold to strange beliefs including that the British people sprung fully-formed from the loins of mighty Albion, without recourse to such things as evolution, invasion, migration, personal hygiene or indeed fashion.

Ensconced in their island home by 30,000 BCE (‘alone at last’, they cried), their rural, isolationist idyll was rudely interrupted when they encountered modern humans for the first time, when these settled in islands of Great Britain. Many of the spontaneous non-settlers (Homo Euroscepticus) resent this invasion to this day.

Unsurprisingly, many of these earlier pre-modern Humans are first recorded in Norfolk[2] and other areas around the Wash, where their descendants live on to this day, hiding their webbed feet and moaning about incomers from the next village along. Unsurprisingly, they largely voted to leave the European Union (or, looked at another way, surprisingly, not all of them did).

When in around 8000-6000 BCE, Britain detached itself from Europe and became an island, Homo Euroscepticus’s last proper job was attempting to dig the channel a little deeper. This did not work, as in 7000 BCE Cheddar man, a daring continental migrant (who, it turns out, was black, like all humans at one stage, a fact that Quitters still cannot accept) brought cheese to the islands, fuelling the English’s on-off flirtation with the continent.

Many people remain deeply suspicious of this new-fangled food, especially when it’s live, which is why many choose to eat shrink-wrapped, dead, pretend cheddar cheese, and are  chary of even the most British of Stiltons. The Brexit divide is right there, between the cheese deli and the plastic wrapped factory cheeses.

Respite was of course temporary as globalisation continued. In the 8th Century BCE the Celtic era in Britain began. These migrants from the continent brought new ideas and culture, as well as increased global trade. As a result, they were viewed with deep suspicion in some parts of the country, especially after they engaged in large-scale building developments, especially around Stonehenge (which may well have been built by people from what is now Turkey[3]) and Orkney, causing an early property boom and housing shortage. And let’s face it, all that clever astronomy was a bit elitist and expert, wasn’t it?

Not to mention the Phoenician traders and their coins and pottery, who arrived on these shores attracted by the lure of Cornish tin. Editions of the Daily Runestone described how many parts of the country were overrun by newcomers clogging up the rivers with their new-fangled coracles. And it got worse. In 55 BCE Europe came knocking in earnest, and predictably Britons were not happy about this. Many Celts sided with the Quitters to resist the ‘invasion’; Europe left a business card and promised to pop back soon, which it did at the beginning of the first Millennium, in 43 CE. Many grudgingly accepted the result after a while, despite dodgy innovations like indoor plumbing and hot water. Eurosceptics took refuge in remote and inaccessible areas, while they waited for the development of Clacton-on-Sea, Bournemouth and the Costa del Sol. Pliny the Elder said nasty things about them, which are censored from the record, although copies were retained at a Mithraic temple in what would eventually become Brussels. European regulations forced Britons to import wine instead of beer, and claimed that mead is not really alcohol (Has anyone studied the respective remain/leave vote split between beer and wine drinkers? We should be told).

However, in 380-400 CE (circa), Europe withdrew from Britain, tired of endless false facts in the Daily Entrail.

Suddenly friendless, Romanised Celts and their Quitter neighbours invited proto-little Englanders to come and help in 410CE, to protect them from violent hooligans (not realising the Englanders were also violent hooligans and more Quitterish than the Quitters who just Quit the Roman Empire). Much fighting ensued for the next few centuries, inspiring a famous children’s song: ‘I know an old lady…’, although the original starts ‘I know an old Pict who swallowed a sword, he swallowed a sword to fight the Celts…’.

Eventually, Europe returns. In 1066 the Anglo-Saxons, by now thoroughly eurosceptic themselves, see their culture culminate in shouts of ‘out, out, out’ against their Norman and Frankish cousins, before being obliterated by reality (putting a stop to sorting things out behind the bike sheds is one of the raisons d’être of the European Union, of course). Nonetheless, the English then spend the next few centuries helping the Normans subdue the Welsh, Scots and Irish (not to mention large parts of France) as part of Norman England. Arguments haven’t stopped since, while descendants of the Normans continue to dominate each year’s new intake at Eton and go on to buy over-priced property in various sunny regions in Europe, much as they did after 1066 (although they have swapped Normandy and Sicily for Tuscany and the Dordogne).

[2] Before you start complaining, the British side of my ancestry can trace their lineage quite a way back in those parts…