ADVERTISEMENTWhen the East Midlands Bylines team heard there was to be a ‘No 2 No Deal’ action day on Thursday 8 October we decided to find out more. After all, the polls make it quite clear that only a very small minority of people, regardless of how they voted in 2016, want to leave the […] 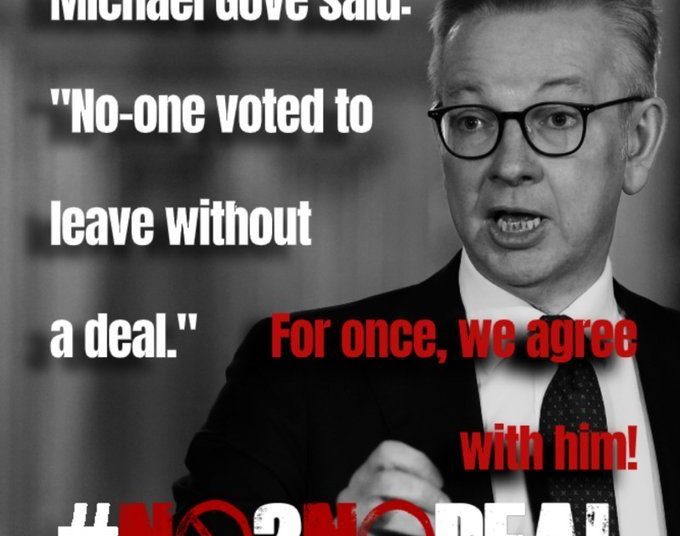 When the East Midlands Bylines team heard there was to be a ‘No 2 No Deal’ action day on Thursday 8 October we decided to find out more. After all, the polls make it quite clear that only a very small minority of people, regardless of how they voted in 2016, want to leave the single market without a deal.

Also, in the 2019 general election Boris Johnson campaigned on an ‘oven-ready deal’ and ensured that all Conservative candidates signed up for his deal. So why would there be a no deal Brexit?

1. What is the #No2NoDeal campaign?

The #No2NoDeal campaign is a coordinated day of action to raise awareness of why a ‘no deal Brexit’ would be so damaging for the country. Let us be clear, this government has been prepping the country for some time now for a possible no deal Brexit. This is a clear dereliction of what they promised back in December. They promised they would work towards a deal with our EU partners. They are now threatening to inflict a damaging, ideological no deal Brexit to placate the hardliners in their own party. We know the devastating impact a no deal Brexit would have on our communities up and down the country. There is a real danger of food shortages, delay in vital medicines reaching hospitals, key industries being impacted with the possible loss of jobs and many more.

The campaign wants to draw attention to this by having a coordinated day of action to tell our MPs that this is not only going against what was promised, but would really cause long, economic and social damage to the country.

Lastly, the country literally cannot afford a no deal Brexit. The economy shrank by 19 per cent in the first half of this year and millions are out of work

All of European Movement’s 125 groups and all 140,000 members and supporters on our database have been asked to take part.

We are also putting on a Virtual Rally in the evening at 7pm with a host of special guests including Caroline Lucas, Gavin Esler, .Polly Toynbee, Michael Heseltine and Stephen Ferry.

We want those taking part to ensure that they link any potential no deal Brexit to how it will affect themselves and their own communities. For example, will a no deal Brexit affect their medical supplies, their business, their job, their son’s job, their local farms or their partner’s settled status in the UK.

4. How successful do you expect it to be?

By Monday we had gained nearly 100,000 online signatures on our No2NoDeal petition page.

3,000 people had signed up to take part in the online lobby.

3,500 people had RSVP’d to attend the virtual rally.

And there is still plenty of time to go.

5. Do you think Boris Johnson wants a deal?

It is clear that Boris would like some sort of deal – similar to what the EU has agreed with Canada. However, as we saw this weekend there is a long way to go. There is still a huge disagreement over fisheries and government subsidies and at the moment talks are still being frustrated over these issues.

But a no deal Brexit (what he calls an ‘Australian deal’) would be the worst possible outcome, especially given the huge economic impact that Covid-19 has already had on the country.

6. What is the European Movement?

We are a grassroots organisation, with a community of tens of thousands of activists and 125 local groups across every nation and region of the UK. We are an independent all-party pressure group campaigning for a close relationship with the European Union, and to ensure that European values, standards, and rights are upheld in British law post-Brexit.

The European Movement can be contacted at: https://www.europeanmovement.co.uk/