Scrapping the NI Protocol is a high risk strategy, with consequences that go far beyond UK/EU Brexit squabbles. Sydney Nash discusses the issues and Article 16.

by Sydney Nash
in Brexit, Politics 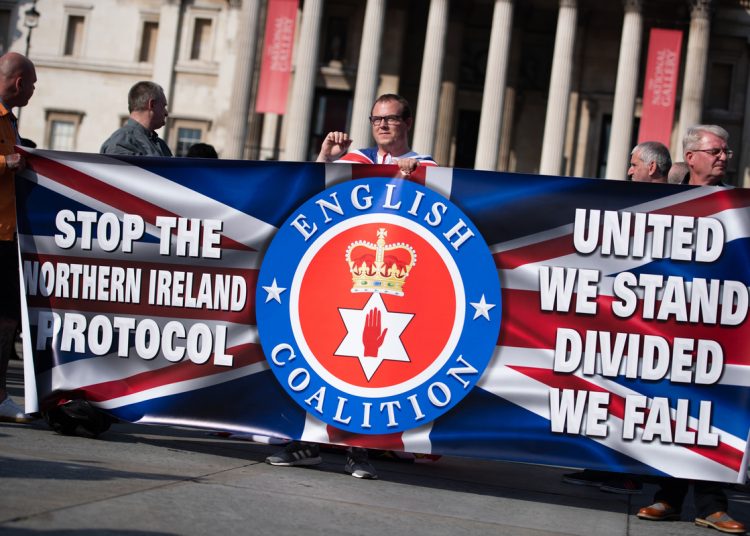 Hard Brexiters are on manoeuvres again, encouraging the government to scrap the Protocol on Ireland/Northern Ireland.

They view the Protocol as evidence that Brexit is still not done, since it embeds in law the continuing application of some EU regulations to part of the United Kingdom. Unionists want to scrap it too. They believe it promotes an all-island economy at the cost of their place within the UK.

Neither the Brexiters nor the Unionists are completely wrong. The Protocol does mean that some EU laws continue to be applied in Northern Ireland, and that through their application, the already highly integrated all-island economy continues to function. However, they are wrong to believe that scrapping the Protocol will free the UK from the regulatory orbit of its nearest neighbour, or that doing so will stitch back together a Union that is already fraying at the seams, in no small part because of Brexit.

Nonetheless, the Brexiters spy an opportunity. They know that Boris Johnson could be on the receiving end of a series of defeats at UK local elections this week, and will be looking for a way to change the headlines. A row with the European Union over the Protocol could be conveniently timed.

Meanwhile, Unionist politicians fear they are running out of time. Northern Ireland Assembly elections, also this week, could see Sinn Fein become the largest party, meaning they will nominate Northern Ireland’s new first minister. Unionists oppose the Protocol as a matter of principle, but fighting it also energises the base.

For those who favour scrapping the Protocol, the stars appear to be aligning. However, if the UK government does choose to do this there will be a heavy price to pay.

The EU has prepared extensive retaliatory measures should the UK trigger Article 16, let alone take unilateral steps to scrap the Protocol. It will likely target politically sensitive regions and apply an economic vice through tariffs and by limiting market access.

The EU is good at this. It has done it to the United States.

While the US responded in kind with the result being an expensive stalemate between two trading powerhouses, the UK, no matter how great one might believe our country is, does not have the same capability or power as the US. The government will quickly find that if it has a trade war with the EU it will be considerably more one-sided than America’s and will seriously damage the UK’s already ailing economy.

Of course, the UK could look to Washington for help, but the US has been clear that if the UK were to trigger Article 16 or scrap the Protocol, it would back Ireland and the EU. This is not just the message from the White House, but Congress as well, where America’s divided politicians take a rare moment to unite in bipartisan support for Ireland.

Unilaterally scrapping the Protocol would leave the UK isolated, with Washington and Brussels both against it. There is only one other European country in that position, and it is probably the only one that would delight in the government choosing to pick this particular fight.

Our priority now must be ensuring that the EU and NATO remain united as they stand in support of Ukraine and in opposition to Russia’s violent attack on its people. The West cannot afford the luxury of arguing amongst itself. The UK cannot afford a trade war with the EU or to alienate the United States. The government must maintain a sense of perspective. Only our enemies will benefit from it blithely damaging the UK’s prosperity at home and relations with its allies abroad by picking a fight with the EU over the Protocol.

If there are issues with the Protocol that need to be resolved the government should continue talking to the EU, rather than consider unilaterally scrapping a carefully negotiated, if imperfect, framework for co-operation. It should prioritise solutions not ideological purity, compromise not media management.

The consequences of scrapping the Protocol are too serious to be ignored, and too wide ranging for domestic political expediency to be the determining factor in whether the government acts unilaterally.

This is a critical moment, and the UK government would do well to look at the big picture, or else risk doing something irreversible that we will all regret.