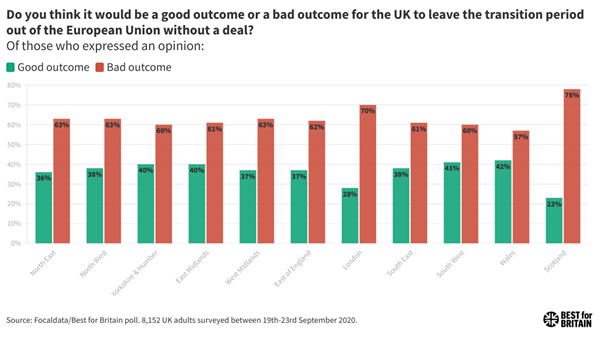 Best for Britain (with other organisations) asked FocalData to conduct regional research on a no deal Brexit showing that there is very clearly no mandate for a no deal in any part of Britain. This includes the East Midlands which was one of the largest ‘Leave’ areas in the 2016 referendum.

Their fieldwork was conducted between 19 September and 23 September 2020. Over 8,000 people were asked if they thought a no deal would be a good or a bad outcome. In the East Midlands 61 per cent thought it would be a bad outcome.

These survey results come as Boris Johnson read out a script on Friday (prepared for him by number 10) saying how wonderful an Australian-type deal (which means no deal) would be.

Best for Britain claims that, “Walking away from talks would be a hideous gamble.”

The BBC has outlined ten ways in which a no deal Brexit might affect you: https://www.bbc.co.uk/news/uk-politics-47470864

Click to find out more about Best for Britain