The Central Bylines team emailed an MP about the Police, Crime, Sentencing and Courts Bill and the downgrading of our rights to protest.

by Central Bylines Team
in UK 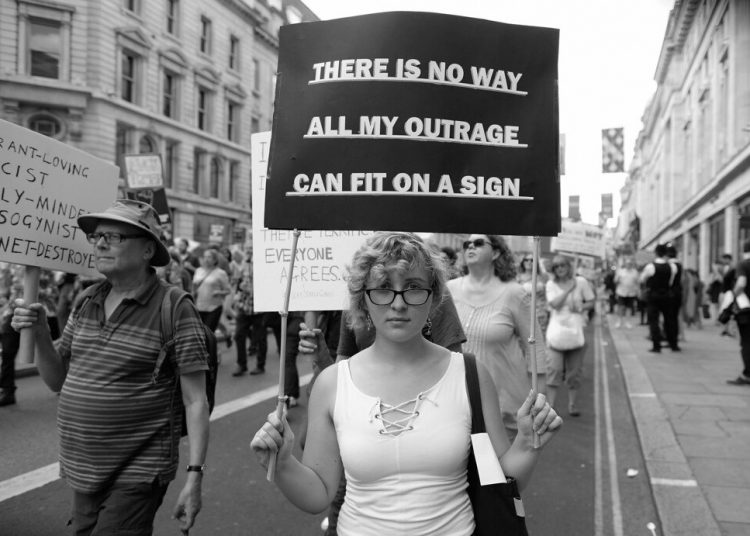 "There's No Way All My Outrage will Fit on this Sign." by alisdare1 is licensed under CC BY-SA 2.0

In yet another ‘dialogue de sourds‘ with my MP, I recently emailed them about the Police, Crime, Sentencing and Courts Bill (PCSCB) currently going through Parliament. As so often, the reply I received was deeply unsatisfactory.

But more than unsatisfactory was their use of language.  Distortion, deflection and (mis- or re) direction are employed to twist or hide the truth in a way that becomes alarming.

My MP writes, ‘In this country we have a long-standing tradition that people can gather together and demonstrate, and the right to protest peacefully is a fundamental part of our democracy.’

The language takes our expectation of rights and downgrades them to a ‘tradition’ – something with no legal meaning. A tradition of peaceful protest. Where is this stipulated? What does it mean? Do we only have the right to stand there in silence? Are we no longer allowed to shout ‘Bollox to Brexit’? Or to gather in shared grief and anger because someone determines this would not be ‘peaceful’?

But the right to protest is a legal right under the Human Rights Act, Article 11.

As Liberty makes clear, the Police can already play with this right, suggesting it needs strengthening. Lawyers such as Garden Court Chambers are concerned:

‘The effect of the Bill would be to lower the legal tests required of the police to use those powers. Conditions could be imposed on marches and static protests where the noise generated may result in the intimidation or harassment’ or cause ‘serious unease, alarm or distress’ to bystanders…’.

My MP quotes the Bill as allowing restrictions on ‘any conduct which endangers the life, health, property or comfort of a section of the public or obstructs them in the exercise of their rights.’  Yes, the Bill will ensure that your legal right to protest will take second place to an undefined notion of someone else’s ‘comfort’. What is this? Their right to eat an ice-cream in peace without people nearby trying to save their right to protest?

The Petitions committee has published responses to a survey it did on the PCSCB. Here’s one: ‘Protests are meant to be a little irritating, they are meant to be noticed and let the government know how the people feel. Restricting peaceful protests will lead to more protests without official organisers, resulting in more disruption, more issues and less information as to where the protests will be, making them harder to police.’

My MP then moves onto deflection

They talk about national lockdown with its requirement to stay home except for limited exceptions; but there was nothing in my email about the Covid-19 restrictions. They continue, “It is for the police, in conjunction with the Crown Prosecution Service to determine whether an action warrants possible criminal proceedings.” What? Had I protested about someone being charged? Nope. I had talked about the future of protest and policing if this Bill becomes law.

Further on, again with no relation to my message they write,’The Bill also contains vital new measures to protect women and girls, including tougher sentences for sex offenders.’

This is not only irrelevant to my email, it is also disingenuous. My MP recently voted against recent attempts to create a register of stalkers and abusers. These measures are in the Bill purely as a way to shut down debate on the rest of it. If you oppose parts of this Bill, you are opposing ‘tougher sentences for sex offenders’.

Parts of the Bill are very clearly directed at certain people or organisations that inconvenience the government. My MP continues, “Over recent years I have been concerned by the extensive disruption that some protests have caused. In particular, stopping people getting on with their daily lives, hampering the free press and blocking access to Parliament.”

This clearly refers to SODEM and other protestors holding up signs near cameras during interviews on Parliament’s college green, and to Steven Bray doing one person interviews with a mobile phone as MPs, Lords and others come in and go.

If this Bill passes, we will no longer be allowed to interact with our MPs – the people we elected and who are supposed to represent us. This is another step along from the locking away of Downing Street in 1989, a supposedly-temporary measure, which seems somehow to have become permanent. But how else, except by muscling into the choreographed coverage of events at Parliament, are individuals (normal people, those citizens without the PM on speed dial) meant to capture attention?

My MP then talks about the need to, “tackle non-violent protests that have a significant disruptive effect.” This clearly targets Extinction Rebellion, the only protest group that seem to be aware of the impending menace of climate change.

As the PM mumbles embarrassingly about ‘bunny huggers’, the generation that will be most affected by global warming needs to be able to nip at the heels of those who see the world only in five year election cycles.

Poverty is well defined by Nobel Prize winning economist Amartya Sen as the inability to participate fully in the life of society. This Bill, by prioritising GDP over democratic engagement, acts to minimise that participation.

If I point out these things to my MP, I will receive the same or a similarly pre-approved reply. It’s a fig leaf. It’s happened before. MP engagement with constituents is yet more choreographed theatre. A sham of democracy. A shamocracy.

You can be sure that ‘any conduct which endangers the life, health, property or comfort of a section of the public or obstructs them in the exercise of their rights’  will not make it easier for you to deal with your noisy neighbours. Unless, of course, they happen to be holding a vigil for a murdered woman, a black man dead in police custody, a planeload of wrongly deported refugees or the death of planet Earth.