Ann Holland writes about the refugee children of Yemen and how the UK government are cutting 50 percent of aid. 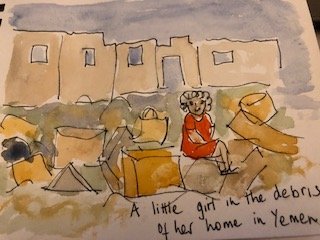 A dear colleague who travelled with me on a British council expedition spent many weeks of the summer in Yemen. Alison was a teacher and she spent her holiday time in the Yemen sewing, chatting and enjoying the camaraderie. In 2014 that all changed as civil war took over the country and the Houthi armed movement took over the capital city Sana’a, leading to massive destruction. Saudi Arabia led a coalition of countries from the region in planning air strikes to put the government back in power. This led to much more devastation in the country. In just one attack in February 2021, tens of thousands of displaced refugees left their city of Marib. The Houthi forces have planted hundreds of thousands of landmines which have killed or maimed thousands.

The current phase of the civil war began when a Saudi led coalition intervened to support the incumbent government against the Houthi rebels supporting the former president, who had been forced out of power after over 30 years. Iran is said to support the Houthis, which means the civil war can also be seen as a proxy for conflict between the US backed Saudis and the Iranian government.

Western countries such as the United States and United Kingdom have supported the original Government and their backers in Saudi Arabia, with much criticism from international groups for the continued arms sales to the Saudis, which are used in the conflict. The USA has said it will stop support for operations by its allies in Yemen.

Women and children make up around 75 per cent of refugees and are extremely vulnerable to smuggling and human trafficking. They are susceptible because of war, civil unrest and lawlessness. 40 per cent of children are not in school because of attacks. Many children, some as young as ten years old, are recruited as soldiers

As a result, Yemen has the worst humanitarian crisis in the world; 230 000 people have died because of the Civil War, the lack of food, health services and infrastructure. The UNICEF humanitarian appeal for Yemen has received less than half of what is needed.

The news that the UK was reducing its aid support to countries such as Yemen was catastrophic. The UK had been a leader in its support and other nations could well decide to follow their lead.

Henrietta Fore, Executive Director of UNICEF, called on the international community to provide funds. She said, “There is no time to waste. Children in Yemen need peace. An end to this brutal conflict is the only way”.

It is difficult to see why the UK government is cutting 50 per cent of aid at this terrible time.  What is certain is that tens of thousands will die as a result of UK cuts.