The Cotswolds was the centre of a burgeoning arts and crafts grassroots movement at the beginning of the 20th century. 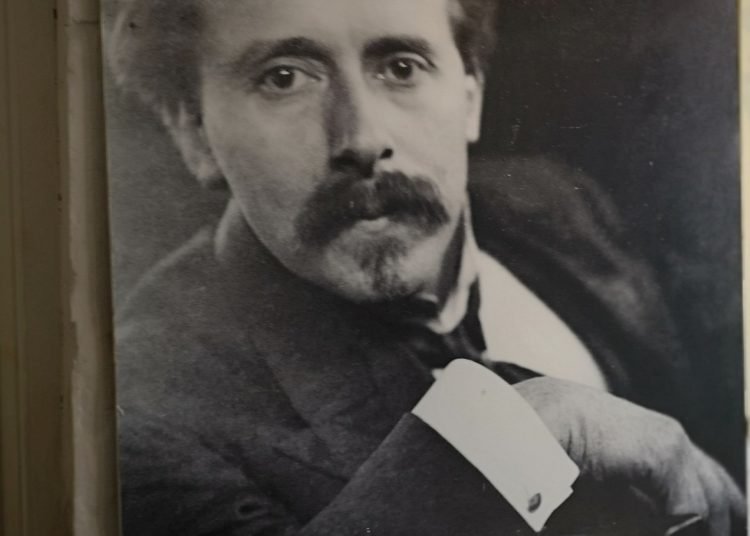 I am fortunate enough to live within easy reach of the work of arts and crafts pioneers whose paintings, architecture, jewellery, and furniture can be seen all over the Cotswolds.

For twenty years or so after the beginning of the 20th century, the Cotswolds were synonymous with craftsmanship. There was the Guild of Handicrafts in Chipping Campden, Broadway attracted another grouping, and further south near Sapperton, south of Cirencester, Ernest Gimson and the Barnsley brothers plied their trade.

The movement was largely a reaction to mass-production brought about by mechanisation during the Industrial Revolution. They harked back to a pre-industrial age of skill and craftsmanship, linking practicality with decorative effects, often using medieval or folk styles.

Most people associate William Morris with the arts and crafts movement. Indeed, many craftsmen and women were following in his footsteps when they migrated to the Cotswolds.

Morris had bought the lease on Kelmscott Manor near Lechlade in 1871. The Cotswolds were largely unknown territory to architects and artists in the mid 19th century. Then the newly-wealthy middle classes from Birmingham began to build their country piles and commissioned churches.

The vernacular architecture of the Cotswolds relied on the skill of master masons. This skill was admired by those artists and craftsmen who moved out of London. They relished the personal pride in a piece of work. Edward Barnsley in Sapperton wrote:

“…it was IMPOSSIBLE for an artisan to produce less than his best.”

The Guild of Handicrafts

To cover the whole arts and crafts movement in one short article is impossible too, so I will concentrate on the Guild of Handicrafts in Chipping Campden and some of the people involved.

C.R. Ashbee moved to Chipping Campden in 1902 in search of a simpler life. He was a follower of John Ruskin and William Morris, and he had set up workshops in the East End of London. He moved the workshops to an old silk mill on Sheep Street.

The Guild specialised in metalwork, making jewellery, wrought iron, and copperwork. There were also stonemasons, wood workers, and stained-glass workers. A school attached to the Guild taught crafts and the Guild operated as a co-operative.

The idea of moving to Gloucestershire was that the workers would escape the grime and squalor of the East End, and have their lives enhanced by living and working in the countryside. The craftworkers and their families numbered about 150 people which must have had quite an impact on a small sleepy town.

By 1908 the Guild were in financial difficulties and went into voluntary liquidation. Several craftsmen carried on independently. Hart, Gold, and Silversmith still work from the original premises in Sheep Street. The Gallery at the Guild is a co-operative of twenty artists and artisans. They moved into the Guild premises in 2005, carrying on the ideals of the original Guild started by Ashbee in 1888.

There are still craftspeople and artisans working in a tradition that epitomises the arts and crafts movement for a modern age.

In Broadway the Gordon Russell Museum celebrates the life and work of the furniture designer and maker Gordon Russell. After leaving school, Gordon began work in a small joinery shop set up by his father to repair and restore antique furniture to fit out the rooms of the ‘Lygon Arms’. This experience, working alongside skilled craftsmen led to Gordon’s interest in furniture design and the arts and crafts movement. Gordon would have been aware of the Guild of Handicrafts in nearby Chipping Campden and its founder, C.R. Ashbee. In 1922, with his father’s support, Gordon set up Russell and Sons. He clearly supported the philosophy of the arts and crafts movement, paying attention to working conditions, education, housing, design and craftsmanship.

Gordon Russell Ltd. was a very successful company. Russell was appointed by the Government after World War 2 as Chair of the Utility Design Council to create a range of furniture that was well designed and well-made to meet the needs of those who had lost their homes through bombing.

The post-war rebuilding of Coventry Cathedral also had some involvement from the Russells. Dick Russell, Gordon’s brother, was commissioned by the architect Basil Spence to design a chair for the ‘new’ Cathedral. Although machine-produced, their simple practical design harks back to the arts and crafts movement. Sixty years on, they are still in use and meet one of the key attributes of church furniture, minimising the visual impact on the interior.

Tom Eddolls is a young furniture designer and maker working in the Cotswolds, who follows the traditions of the arts and crafts movement. He is a member of the Guild of MasterCraftsmen and is a member of the co-operative at the Gallery at the Guild. His furniture is hand-crafted, showing exposed dovetail joints and displaying the beauty of the wood without the need for artifice.

The Wilson-Cheltenham Art Gallery and Museum holds an internationally important collection of the work of designers and makers of the arts and crafts movement. The collection has a strong local base, demonstrating the Cotswolds as an important centre for the movement. The arts and crafts movement holds an important message for today through sustainable production, high level skills and conservation.

The Court Barn Museum, near St James Church in Campden, provides an exhibition of the works of local craftspeople and a history of the Guild.

Gallery at the Guild