Sent to Coventry – for culture!

Living less than an hour from Coventry, the current UK City of Culture, we thought we’d take another step out of lockdown and see what the city had to offer. 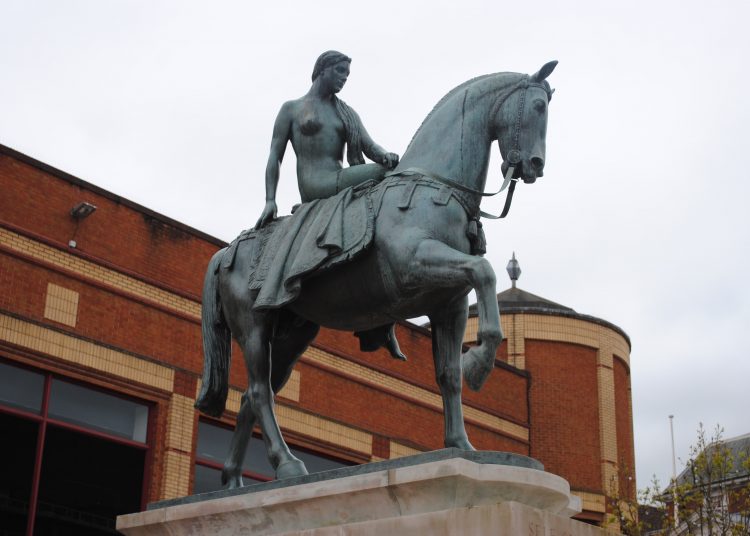 Back in late June, Facebook conveniently reminded me that we’d had a lovely day in Hull when it was UK City of Culture back in 2015. Living less than an hour from Coventry, the current UK City of Culture, we thought we’d take another step out of lockdown and see what the city had to offer.

Likewise, when we saw that a new raft of cities (or rather areas, including Lancashire and “The Borderlands Region”) had been shortlisted for the title in 2025, we decided to go again. The second time, we were a little less anxious about visiting a large city. However, as a couple in their early and late sixties, we’re still shying away from indoor events and crowded areas, so both visits were a quantum leap from what we’d been doing over the past eighteen months.

Shining the spotlight on Coventry

Shining the spotlight on the culture of an area is a brilliant idea, and Coventry has a great wealth of history to draw from. Years ago, we visited the city during Heritage Week and were lucky enough to see an amazing amount of history usually hidden to the public, including inside the wonderful Tudor Revival style Council House, surprisingly built in the early 20th century and a real architectural highlight of the city, along, of course, with the Cathedral.

One thing often overlooked about the UK City of Culture is that it is just that. The UK City of Culture. Unlike Glasgow and Liverpool, Coventry is now part of a UK only scheme, as opposed to the annual European version, which in 2020 fell to Galway and Rijeka (Croatia) to do their best to let their culture shine during the pandemic.

The UK was actually scheduled to host a European Capital of Culture in 2023, but we all know what happened there. We were disqualified from holding the event back in 2017. How much that might have cost the area chosen due to the loss of pan-European funding and publicity will always remain a mystery. And of course, the pandemic would have wiped out most international visitors anyway.

Even so, Glasgow and Liverpool are certainly testament to how being European City of Culture can be a game changer. I’m not sure Derry/Londonderry, Hull, or Coventry will have the same legacy being simply UK City of Culture, but time will tell.

Coventry – this year’s City of Culture

I hope my fears are unfounded and it’s fair to say some parts of the city centre have certainly had a spruce up, although much work is still to be done. The pedestrianised Upper Precinct has definitely had a facelift and looks a lot more inviting, although disappointingly the main fountain still wasn’t working when we visited which might have taken our gaze away from the old BHS building, still waiting to find a new tenant.

Before setting off, we had a look at the City of Culture website, but failed to see much of interest for anyone having a simple walk around the city and not wanting to go inside a venue for any prolonged period, crowded or not.

We set off anyway, not before checking the very useful Parkopedia website so we didn’t end up paying a fortune for parking. The Belgrave Plaza car park looked the best bet at 90p an hour. It turned out we could have paid 10p less by using a NCP app, but after our fiasco with RingGo in Wolverhampton, we decided just to pay with our credit card, which thankfully didn’t have any hidden charges this time. On our second visit, we used the same car park and tried to use the app on the way out, rather than scanning it on the way in – and somehow managed to pay twice! NCP’s customer service has been diabolical, but I’m going off subject. Of course, pre-pandemic, we’d have taken public transport, but we still need to jump through that hurdle.

Where is the culture?

On our first visit, we walked to Medieval Spon Street, passed the now empty Ikea, briefly looking at two competing on-street electric car charging areas. Strangely one was charging 29p/kW and the next 30p/kW with a 50p connection charge. We also saw lots of bikes for hire – and thankfully no electric scooters which frighten us to death when we see them.

As with any city, there are always things to discover, but so far, we’d seen little, if anything, about the City of Culture. Even driving in on the main A45, all we saw was a small sign under the Welcome to Coventry sign. Living in Birmingham, wherever you go, it’s already hard not to notice signs about the Commonwealth Games taking place next year.

We found the City of Culture shop, but on our first visit, weren’t confident enough to go in and speak to anyone, hoping that some outdoor information would be available. Of course there’s a website and an app, but we couldn’t see much for the casual visitor who didn’t want to go to a specific event which might have been too crowded. We also passed a pop up Police Museum, but again, we didn’t really want to go inside. It was closed on our second visit as it only opens Thursday to Saturday.

Walking past the Herbert Art Gallery, we were surprised that no attempt at an outdoor exhibition had been made – for visitors still grappling with trying to keep safe during the pandemic, perhaps some of the Two Tone exhibition could have been put outside so you don’t need to go inside. Having said that, we later saw that Pool Meadow Bus Station had a Two Tone mural, making the area going away from the city slightly less run down.

The St Mary’s area is still being renovated – presumably this was delayed by the pandemic. It’s a shame no-one thought of sprucing up the panels hiding the building works with either a mock-up of how it will look or some other artwork. We did notice some murals as we went round the city, notably by Belgrade Theatre, but no real discernable trail to follow apart from some shop windows. Then again, shouldn’t shop windows always look enticing and interesting?

On our first visit, the Festival Showground was closed – we saw some information outside about the University on the hoardings, a box office for event tickets and some locked doors. It didn’t open until July. On our second visit in August, it was closed to the public for an Ed Sheeran concert! Perhaps it’ll be third time lucky.

We were sad to see one of our favourite places before the pandemic, Playwrights, hadn’t managed to survive, but it was better news in the World Food area by the BBC. Even though the Priory Visitor Centre sadly seems to be permanently closed down, the square still has a smattering of Asian eateries with outside seating.

We thought Shin had the most interesting menu and chose their Bento boxes which were fantastic, and we had no hesitation in ordering the same meal on our next visit. That time, we saw a walking tour go past, having a look at the walk of the stars, including Hazel O’Connor and Pete Waterman, amongst many others. As I’ve said, a city always has plenty to discover!

The City of Culture was lacking in culture

Living in the Birmingham area, we’re used to a cultural offering that is second to none, rivalling any world city with so much always going on. It would be grossly unfair to say there was nothing to see and do in the city, but we couldn’t see too much evidence of the city really coming to life.

On our second visit, we did pluck up the courage to go into the City of Culture Shop and I had a chat with Aiden who did his best to help, although the only thing he could come up with was something at the Council House for children and mentioned the sold out Ed Sheeran concert.

We were a little disappointed that he couldn’t point us to a few things of cultural interest around the city – we were hoping for something like the elephant parade currently in Worcester. Whilst I spoke to him, my husband was astonished to hear someone asking to buy tickets and being told they had to either buy them online or go to the ticket office at Festival Gardens!

Since writing the bulk of this email, we finally ventured into Birmingham again. Within five minutes, we saw more culture in and around the city than we did on two visits to Coventry.

Coventry does have a rich culture

However, let’s finish on a positive note. On both occasions, especially given the ravishes of the pandemic, we found a fairly vibrant city well worth a visit where the few people we did speak to seemed friendly, open to visitors and welcoming. And safe, with most people we saw still taking appropriate precautions against the pandemic, which after all, hasn’t gone away.

From interesting architecture including Tudor buildings which help take the edge off some of the 60’s monstrosities, to incredibly welcoming and inclusive items like an LGBT rainbow zebra crossing, and a craft workshop in the market, being sent to Coventry is certainly not such a bad thing and makes a refreshing change from the well-worn tourist paths.