Andrew Picken discusses the future of Allestree Golf course and how a group of concerned locals are working to protect its future. 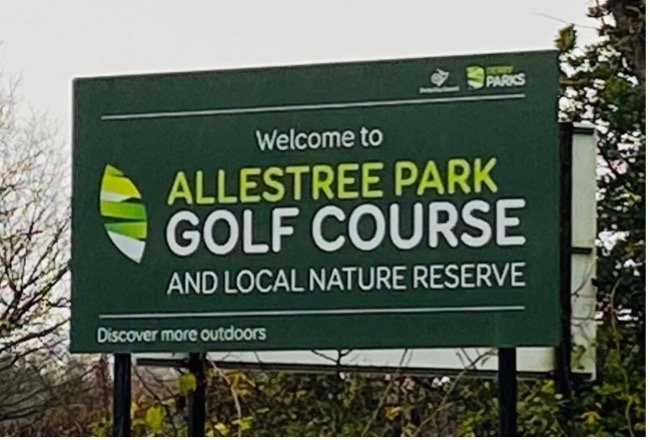 Allestree Park golf course closed on January 1st 2021. As Derby slides listlessly towards the local elections on Thursday, questions are being raised over decisions taken by the city council about the course. It’s a site that is special to many people in the city, golfers or not, and especially so during Covid-19 when outdoor spaces have soared in popularity.

Save Allestree Park Golf Course is a disparate group formed to protect the course for future generations. None of us has a financial interest in the course. The common thread is that all of us owe our start in the game of golf to the course at Allestree Park. It was fully accessible, affordable and inclusive to all ages – a wonderful community asset and municipal facility. Neglected and overlooked by its owners Derby City Council (DCC), since 1948 it has been run on a shoestring with a bare minimum of care and investment. Its innovative design by Harry S Colt has been unappreciated and unheralded.

The 100-acre course sits within the largest Local Nature Reserve in the county. It is protected by its position within a World Heritage site from the developers’ bulldozer. It should be a safe and secure public asset. It is surrounded and encircled by the mature parkland. The park and the course have supported the other for 90 years. At the heart of the park is a wonderful grade 2* listed building by James Wyatt. This has been sold for development as a wedding and events venue.

Unfortunately,  the golf course has not been safe from the politician’s pen.

We have identified a number of issues with the city council’s decisions on the sale of the building and closure of the course that require fuller explanation. This is all documented on a website we have set up to provide all our material for public review and inspection. Take a look. It’s all there.

On 1st January this year, Derby City Council closed the course. It was left abandoned to be destroyed over time, despite:

The photograph illustrating this error came from the DCC archive known as Picture the Past. It is used on paid licence from them. (Other images ©A Picken).

As the course history became publicised properly, a number of golf industry developers came forward with ideas to buy and develop the Hall and golf course together. Colt-provenanced designs that remain in their original 1930s layout are extremely rare.  The developers were stymied since the council had already sold the Hall to their preferred bidder.

DCC instituted a flawed process seeking operators to lease the course. Industry experts consider that this was designed to fail from the outset. Two applicants actually scored highly enough to record excellent or good ratings but neither was engaged in any negotiations and simply received an e mail telling them of the rejection.

An Equality impact Assessment was conducted that scored 80% negative impact if no mitigation measures were applied or considered. Its publication on the council website was delayed for almost a year. No consideration has been given of the impact of selling the course on the juniors who use the facility, nor the older citizens who have loved and used the course  for years. The golf club attached to the course has also folded as a result of the closure.

Derby City Council’s financial figures showing the course as a loss-making facility are unreliable; further examination has revealed them to be estimates. The computer system that recorded the use and green fees paid is no longer accessible. We also discovered that prices had been dropped for green fees in contrast with all other charges for leisure facilities being increased by five per cent.  Unsurprisingly, this led to losses.

Even now, we know of a group who are desperate to run the golf course. We are told that in the last few weeks they have submitted a fully compliant bid, meeting all the council’s criteria, including the fact that they can do it at zero cost as a Community Investment Company which would return the profits to the venue. The group has a proven track record with other, similar municipal courses . But our excitement has turned to dismay – this offer has also been rejected.

48,000 golfers have paid to use the facility in the last three years. Unattached golfers who cannot afford club memberships have almost nowhere else to go. Golfing demand is so high that visitors are not currently allowed at private facilities. There is only one other accessible course to serve a city of a quarter of a million people. Golf provides so many benefits – exercise, well-being, socially-distanced companionship. These are all areas of supposed importance to a local council with a mandate to provide facilities for community use.

DCC have a ready-made, historic golf facility available for use at a time of record demand and income generation. Yet they are allowing it to degrade and die through lack of maintenance. Other councils in other places are being far more savvy.

We have been told by DCC that the statutory duty to ensure Best Value when disposing of a council asset does not apply in this case as the golf course is being allowed to be “absorbed into the surrounding parkland.” This is not convincing. It  add’s only 100 acres of parkland to a Local Nature Reserve that is already the largest in the county. Why not get both facilities working together, as has happened for the last 90 years? Abandoning the course will destroy its value, both commercially and historically.

The editor of Golf Course Architecture magazine recently described the course as “priceless”. It is one of very few layouts that retain the same structure as the day they left Colt’s drawing board in 1929. Using contemporary news reports of the day, we have reconstructed the course layout indicating that 14 of the original 18 are still in play and the other original holes are still available for recommissioning.

“It is tragic that Derby City Council refuses to move from its short-sighted plan that has deprived its citizens of this unique and historic facility, reduced the commercial value of the course and deprived the council of revenue. And all for what? Short-term profit. Peanuts indeed.