The government’s upcoming Online Safety Bill has been in the pipeline since 2019 but the murder of Southend MP, Sir David Amess has put it back in the spotlight. 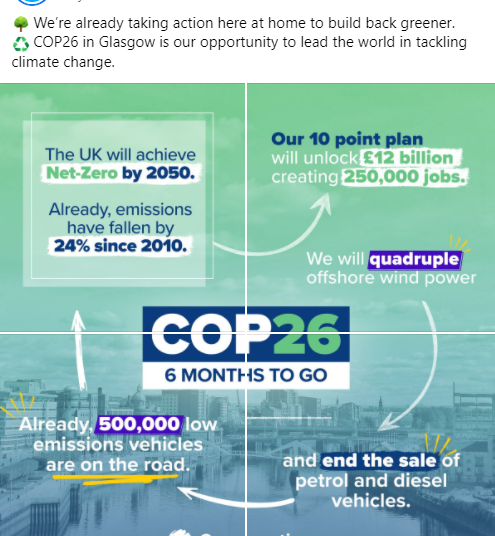 Source Conservative FaceBook page These are bold statements with no actual plan or idea of how to deliver them. For example, If they want to only have new electric vehicles from 2030 the estimates are we need 2.7m charging points that means building 700 a day between now and 2030 and currently we are building 40 a day (Source The Energyst)

The government’s upcoming Online Safety Bill has been in the pipeline since 2019 but the murder of Southend MP, Sir David Amess has put it back in the spotlight. Central Bylines takes a look at the bill in more detail.

There are many in government who take the issue seriously. Tory MP and erstwhile Chair of the Digital, Culture, Media and Sport Select Committee, Damian Collins, has made the bill something of a personal cause. He points out that Ofcom regulates broadcasters, the Gambling Commission oversees gaming machines and the Financial Conduct Authority protects customers from financial risk. He feels it’s time the tech sector caught up. “It shouldn’t just be left to people like Mark Zuckerberg to determine when Instagram should remove images that could lead teenagers to self-harm..there needs to be external auditing of how effectively they remove harmful content.”

The focus of the bill is geared particularly  at the online safety of children but also covers terrorism, racist abuse and pornography.

The bill undoubtedly tries to inch along an extremely fine line between protecting freedom of expression whilst regulating harmful content. But even as it attempts this precarious balancing act, the published draft does appear to contain some whacking great holes.

Let’s look at the provisions to tackle online scams. Romance fraud (where fake dating profiles are used to lure victims into parting with their money) and investment fraud are both on the increase. In 2020, £21m was lost to romance scammers and more than £135m to investment fraud. Both of these are included in the new bill. Not covered, however, are the fake online scam adverts which the Financial Times describes as the central problem, the gateway to real fraud. Money-saving expert Martin Lewis has also been outspoken in his criticism of this omission. He points out that it isn’t just about the money: “The government has failed to protect millions, in the midst of a pandemic, from one of the most damaging online harms to their financial and mental health.”

Let us also look at the provisions to protect democratic political debate. The original white paper acknowledged the dangers that digital technology could pose to democracy. It stated that action is needed to combat the spread of misleading information because of the potential to damage trust in the country’s democratic institutions, including Parliament. It set out what might be included in a regulators’ code of practice. Things like using fact-checking services during election periods, limiting the visibility of disputed content, promoting trustworthy news sources and diverse news content.

Somewhere along the way, somewhere between the issuing of the white paper, the public consultation, Lord Puttnam’s report from the Democracy and Digital Technologies Committee (which made a number of recommendations) and the published draft, this laudable position seems to have shifted. The bill no longer proposes to legislate against challenges that online platforms pose to democracy in any significant way. It has off-loaded these duties to the Cabinet Office. Thus far, Lord Puttnam is not impressed.

Perhaps, then, we should not be surprised about these two major defects in the published draft of the Online Safety Bill. Asking this government to legislate against misinformation on social media is like asking a small boy to hand back the key to the tuck shop that he’s just snuck into his pocket.

Let’s see what happens to the bill during the committee stage.