Fans have accepted that their club being owned by a multi-billionaire is worth it as long as that ownership delivers success on the pitch. 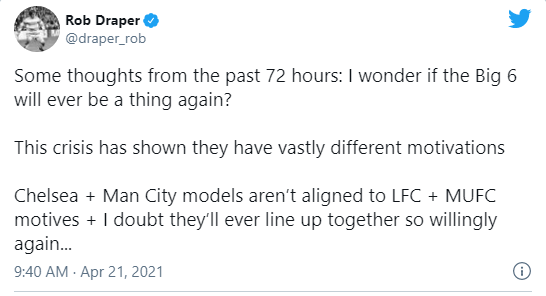 The European Super League is no more. Like the famous Norwegian Blue parrot, it’s bereft of life, expired and ceased to be. I’d like to imagine those behind it were thinking of it as a welcome and imaginative idea that would raise morale after a year of Covid lockdown. Instead, they were hit with a tidal wave of criticism, most forcefully articulated by Gary Neville on Sky, with other ex-professionals Danny Murphy, Gary Lineker and Jamie Carragher also weighing in. As an exercise at reading the room, it was a catastrophe.

What prompted the idea and what are the consequences? There seems little doubt that the answer to the first of these questions is money. A perceptive thread by the chief football writer of the Mail on Sunday lays out the big picture. Furthermore, Covid-19 has hit football hard and even though this season is going to run its course, the most recent lockdown has prevented any revenue from ticket sales, leaving all clubs reliant on other ways to stay solvent. The six English clubs involved are better off than most, with television revenue, sponsorship and prize money from European competition there to help. When you learn that eleven Premier league clubs made a profit in the last financial year from those sources alone (no ticket revenue was needed), the overwhelming sense is not one of need but greed.

If the motives are easy to see, the consequences may take a while to play out. The last 24 hours has been filled with the grovelling apologies of the club owners who forgot the one thing that matters: the fans. By and large, fans have accepted that their club being owned by a multi-billionaire is worth it as long as that ownership delivers success on the pitch. But an event with no promotion or relegation, where all the teams would be effectively playing friendlies and where a match in the ESL featuring the very top players would likely be followed by a Premier League game for which many of those stars would be rested, would be no attraction. The owners may well be hoping that their expressions of regret will encourage fans to forgive, forget and move on. Some will; many won’t.

Football fans have long memories. The Sun newspaper is still the target of a boycott in Liverpool after the slurs it made about the supporters’ behaviour in the wake of the Hillsborough tragedy in 1989; and a poll conducted by YouGov suggested supporters do not believe that these clubs should escape unpunished, with 55% wanting financial penalties for the clubs and an astonishing 51% saying they deserved expulsion from the league.

It may well be that if there isn’t some significant action taken against the clubs, fans will demand a much greater involvement in the running of their teams. It was noticeable that no German side (where fan ownership of the clubs is long established) was involved in the ESL launch announcement. There has been talk of restructuring club ownership along the lines of the German model, noticeably from Boris Johnson. As Michael Heseltine observed, Boris waits to see which way the crowd is running and then dashes to the front, to gain political advantage. His track record of making statements with minimal consideration of the practicalities and consequences does not suggest any such restructuring will happen soon, if at all.

What’s largely passed unnoticed in the last few days has been the impact on the game at the wider level. How do smaller clubs react to the recent events? And what do their fans think? Here, there is an unresolved problem. Judging from comments made by people close to League 1 side Lincoln City for example, there is already a level of distrust with the big clubs which a few emollient words won’t wash away. While some accept the ESL in some form may return, the major area of distrust stems from the attitude that the big clubs have about the smaller ones because of the way football finance favours the elite.

There are ongoing discussions about a plan to reform football post-Covid which is being driven by the Premier League. In return for a cash bailout for lower league clubs, the elite clubs would effectively take control of every aspect of the game, from the number of teams in each division to decisions over media rights. Can you imagine the response from fans if Lincoln were playing a Premiership side in the FA Cup but screening the game was vetoed by one of the Big 6, thereby depriving the club of important revenue? With a number of clubs reportedly in financial difficulties, such behaviour will further widen the gap between the elite and the grassroots.