RebootGB's Take the Pledge online campaign is an opportunity for voters and non-voters alike to use their collective power. 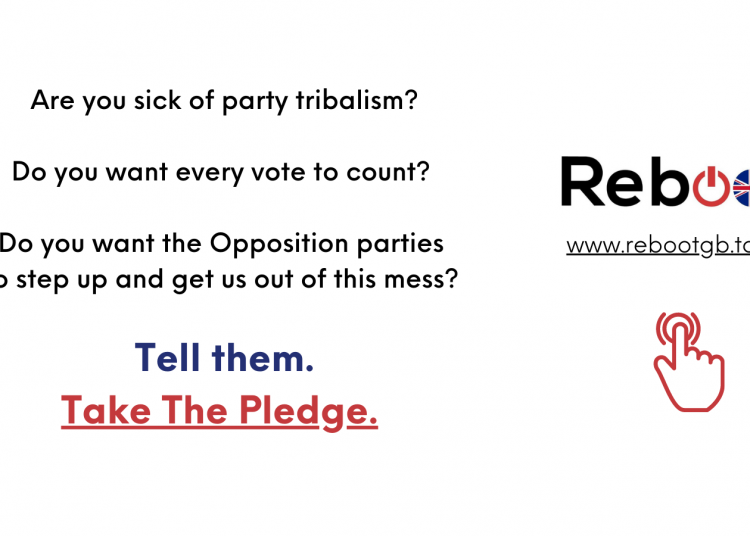 RebootGB continue to work on their pledges following the last round of council mayoral Scottish, Welsh and one national by election to try and reshape the British political landscape, which seems not only stuck but regressive, and where votes too often don’t count.

Liz Crosbie and Lyn Dade of RebootGB explain their aim to get people to take the Pledge on voting in the national interest and how.

IT’S TIME TO RAISE YOUR VOICE

RebootGB’s Take the Pledge online campaign is an opportunity for voters and non-voters alike to use their collective power. Politics has become something that is done to us rather than for us. This pledge is to direct your vote – your voice – towards a better future. We believe that if many speak with one voice, they will listen.

RebootGB is an intervention to change the narrative around how politics should be organized. It supports a progressive alliance for national renewal at the next UK General Election. The Pledge is a way to move this powerful idea forward – making it clear to the party leaders how to win our vote. We need to do this now because that next General Election may come sooner than pundits expect.

The Pledge is a message that says it is time to ditch tribalism and act in the country’s interests. In too many areas, progressive opposition voices drown each other out. As a result, all efforts result in Tory wins, against the desires of the majority of voters.  We need to readdress the balance and make the majority count.

There is an intense ongoing discussion amongst many of us in the Remain and Progressive communities about how best to defeat the current government, and bring about the change the country needs. Before the Hartlepool result, many were hoping for a resurgent Labour party to emerge that could bring progressives together.

In May 2021, this seems unlikely as the party retrenches and looks inward. Sir Keir Starmer faces the deep divisions of vision and tribe within his party.  It will be hard to reconcile the traditional Labour pro-Leave ethnocentric voter with the aspirations of graduate generation rent in the cities of England.

A social divide has led to a general acceptance of the Brexit agreement by the political parties, except for the Greens. That is unlikely to change until a new consensus on the nature of the UK’s relationship with our neighbours emerges. So RebootGB is arguing for a period of internal change to reset the country and get us into a more joined-up political space, not governed by identity politics.

The progressive argument is that intelligent campaigning could turn the next General Election and open the door to a long-overdue reform. First steps should cover voting, constitutional and electoral law reform. Together those measures would offer a realistic chance of bringing politics back from its ideological and identity extremes, and birth more measured and intelligent policies.

But that requires a political first, a national Progressive Alliance. This means the Parties agreeing not to compete in unwinnable seats. Such a new commitment – for the country’s sake – would be transformative. And needs to happen just once, after which progressive parties can compete to lead future governments or coalitions on positive grounds.

For the Labour party, it requires clarification from the leadership on the issue of the need to contest all seats. “The Executive Committee of this LCF shall seek to contest all seats in each electoral area in consultation with the CLP concerned.” There have been multiple interpretations of that part of the party’s constitution.

As a lawyer, I am sure that Sir Keir Starmer can find a way of interpreting those guidelines to create a robust and legally water-tight response. Thereby allowing Labour to stare down candidates in unwinnable seats.  Ensuring progress for other parties where the party has no chance of taking a seat will break the standstill.

There is much work to do, and the parties cannot, and should not go it alone. They need support from democracy and civil society activists to create the right atmosphere for cooperation. We need to meet at the constituency level to iron out the issues between the parties and activists, and to re-engage voters in our democracy.  In so many seats, the Tory majority could be wiped out simply by non-voters turning up.

Young people are particularly disengaged from politics, allowing older, settled homeowners – often retired – to dominate. That must change. We must get the young registered and encourage them to vote. A cross-platform campaign must address these deficits, and RebootGB is working with others to make that possible.

What can you do? You can pledge to tell politicians that your vote is reserved for those that put the country’s interests first. A new breed of politicians will arise, willing to work together to do the best for us, amplify our voices, and build a better country for the many, not for the few.  Join us. It is now all hands to the pumps as the waters of popularism are rising.

You can Take the Pledge www.rebootgb.today/the-pledge