When Robert Largan’s office in Derbyshire was vandalised, a local man used his photograph to raise hundreds of pounds for the local food bank. 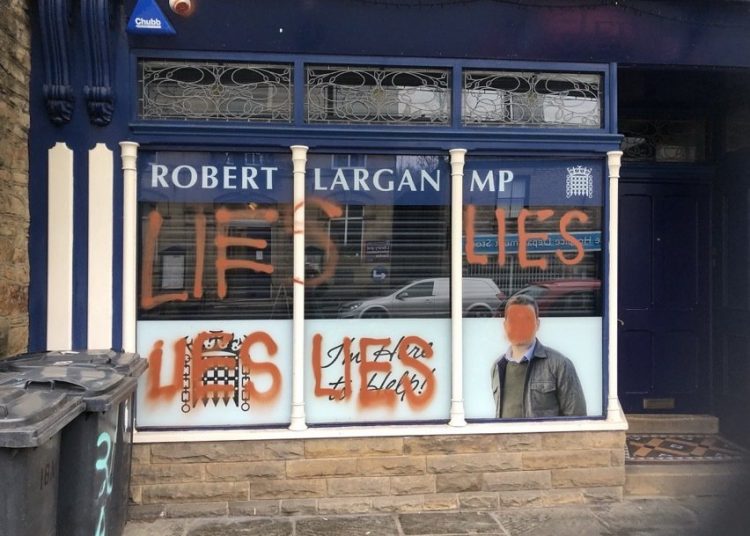 Picture by a local reproduced with permission

A photograph of vandalism to a Conservative MP’s office went viral and raised hundreds of pounds for the local food bank.

We’re all waiting for the photos to emerge from Partygate, aren’t we? Oh come on, let’s not pretend, we really are.

After all, they say a picture is worth a thousand words. In High Peak, one photograph has been worth rather more than that. A picture connected to Partygate (albeit indirectly) has raised nearly a thousand pounds for a local food bank.

Here at Central Bylines, we can’t afford to buy pictures for our articles. We are all volunteers and there is precisely zero in the petty cash box. So we have to get creative. We ask for permission, we take photos or we make our own – we have some wonderful cartoonists, artists and meme-makers. If all else fails, we fall back on pictures that we are allowed to reproduce for nothing. For example, the images found in Wikipedia are often free to use as long as the appropriate credit is given.

Here are the conditions attached to a picture of the Crescent Hotel in Buxton which I’ve screenshotted and cropped from Wikipedia (credit to Douglal, whoever they may be).

It is perhaps surprising that the big name news outlets also try and save a few pennies in the same way, as the story of this little picture tells us.

The conservative MP for High Peak, Robert Largan, has his office in the Derbyshire town of Whaley Bridge. One Saturday night in January, while the Partygate fires raged throughout the media, his office was vandalised. Vividly and unmissably vandalised.

The first person to notice the vandalism was Jim, a Whaley Bridge resident who happened to walk past the office about 10 o’clock on the Sunday morning. He took a picture, posted it on Twitter as an example of how high local feeling was running and thought no more about it.

What the papers say

His tweet drew a modest response but the next day, Jim’s photo appeared – uncredited – in The Telegraph.

Later that day, it appeared on Sky News too. And then in the Guardian and the Express. Not one of these outlets asked Jim’s permission before reproducing it nor gave him credit. He contacted them and requested a donation to the local food bank as a payment for using his photograph.

The Metro is the only news organisation that asked up front. Jim requested – and got – a £100 donation.

Sky News, the Metro and the Telegraph paid up. The Express and the Guardian, as yet, have not. To date, Jim has raised £750 for Whaley Bridge food bank.

The irony of the situation is not lost on us. During the last twelve years of Conservative government, the need for food banks has risen stratospherically. Whaley Bridge has its fair share of people needing help. Despite the claims of another prominent High Peak Conservative, they don’t just spend all their money on dog food and tattoos. It seems only fitting that a photograph of Robert Largan’s damaged office has raised a decent sum for his nearest food bank.

Jim himself is happy that something positive for the town has come out of what is undeniably an ugly incident.

…even when no-one is watching

We are happy that the photograph has done so much good, But this little tale does give us pause as to why we take so much care, here at Central Bylines. The answer, I suppose, is obvious.

Ask, and it shall be given you

This could happen to anyone. Jim wasn’t looking to get a photograph in the national papers but ripping a picture out of Twitter is the easiest thing in the world.

If it happens to you, don’t let it go. Whaley Bridge food bank has received a windfall of £750 to help local people because one man was canny enough to ask.