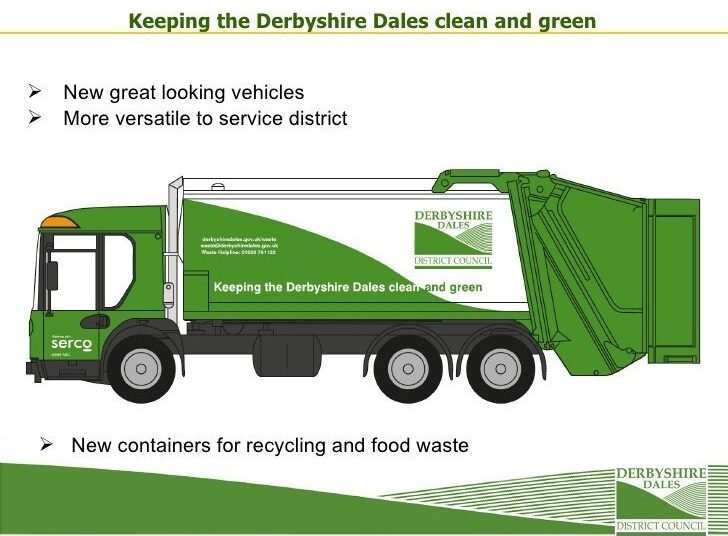 Normally at this time of year, social media in the sleepy villages of the Derbyshire Dales is busy with news of carnivals, wakes weeks and well dressings. Not in 2021! Instead, it’s bins, bins and more bins, as the local Council, multi-national corporation Serco and residents have become embroiled in an increasingly bitter dispute about the bailout and the local refuse collection service.

Matters reached a head last month when, at an extraordinary meeting of the Council, Serco, the service provider for refuse collection, were bailed out financially for the third time in under twenty months, thanks to the casting vote of the chair. In an acrimonious debate lasting over two hours, the Conservative-controlled Council agreed to meet up to half the costs of a pay rise for Serco’s drivers. It also agreed to suspend the collection of garden waste for four weeks and not to impose financial penalties on Serco for missed or late collections.

This came on top of a decision by Council officers the week before to suspend the collection of food waste for three months; residents have been told to add it to their normal household waste for collection every fortnight. The Council have refused to consider a refund to residents who pay to have their garden waste collected, instead offering a £15 discount for next year.

Serco’s refuse collection service in the Dales has been in turmoil for the past few months. Recycling bins have been left overflowing for weeks on-end, collections have been missed and food waste containers scattered on the village streets. Serco claim the problems are due to a shortage of drivers and say they cannot afford to pay them more than the current rate of under £11 an hour. In 2020, the council gave Serco an extra £350,000 to help them cope with the effects of the Coronavirus pandemic.

When news of the extraordinary Council meeting became public, residents in this normally peaceful corner of the country reacted with a mixture of disbelief and fury. All 39 Councillors were inundated with emails and messages objecting to the proposal to bailout Serco yet again. By the date of the meeting, more than 40 pages of written representations had been received. Without exception, residents were clear that the Council had only recently entered into a new contract with Serco, that it was their problem and that using public money to fund a pay rise for the multi-national’s drivers was simply not on.

Pleading poverty despite a 50% increase in profits

At the meeting itself, Serco’s management (they didn’t allow any workforce representatives to attend) hardly inspired confidence. They continued to blame a combination of Brexit and the pandemic for their problems and said they just couldn’t afford to fund the pay rise themselves. They threatened dire consequences if the Council didn’t give into their demands. When asked what would happen once the financial support ended next March, Serco replied that they would have to look at ‘efficiency savings’.

It is worth noting here that the company’s profits are projected to jump to £125 million for the first six months of 2021 and their revenues are forecast at £2.2 billion. Led by the Labour Councillor for Abney, Grindleford, Eyam and Hathersage, Peter O’Brien and the independent Councillor for Winster, Colin Swindell, Opposition Members of the Council set about demolishing the arguments put forward by the Conservative majority in support of the proposals. This included calls for an independent investigation into the service as a whole and what has gone so badly wrong. Clearly rattled by the strength of the arguments and the vociferous campaign by residents, Conservative Jason Atkin proposed cutting short the debate and moving straight to a vote. Although seemingly embarrassed by this, and amongst cries of farce, the leadership agreed.

A recorded vote followed, and there were early gasps when the normally loyal Conservative chair, Sue Bull, announced her vote against the proposals. This produced the dramatic result of a tie, so giving the chair a second and casting vote. After a short pause, and hushed conversations at the top table, this time she voted in favour – enabling the Council to move forward with its package of support for Serco.

So where does this leave us? The reality appears to be that the contract agreed between one of England’s smaller Councils and one of Europe’s biggest multi-nationals is hopelessly one-sided. Its own legal team warned of long and complex negotiations if the Council took on Serco, despite the views of an overwhelming majority of residents and half its elected Councillors. Conservative councillors comforted themselves with the belief that as the financial support was coming from government money given to the Council, that made it palatable and somehow all right.

Yet there is no guarantee that either the money given to Serco, or the short term measures to suspend collections, will result in a sustainable refuse collection service over the remaining seven years of the contract. Ironically, the service in neighbouring and very similar local authority, High Peak, has continued unaffected by disruption throughout the period. Perhaps the Goliath Serco will come back for more in 2022, giving the Davids of the Derbyshire Dales another opportunity to question the merits of privatisation?

One thing is certain. Councillors will continue to ignore public opinion and resident power at their peril. The next elections are less than two years away. Carnivals, produce shows and well dressings may once again dominate social media but those bins have wheels.

Britain’s supply chain crisis - the battle for our booze