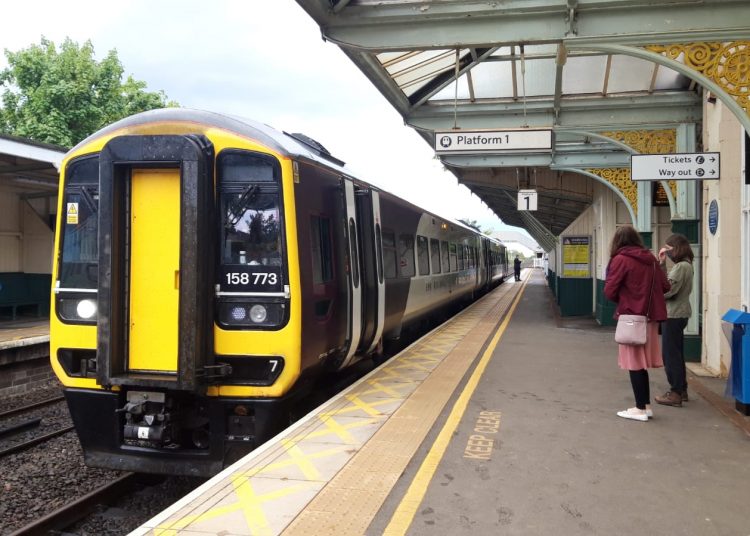 I know little about trains, and how they run. I’ve never devoted much thought to franchise agreements and I can’t get excited about livery. I’m even ambivalent on HS2, as I don’t feel I’ve had time to engage fully with the perilously complex debate. I’m loosely in favour of nationalisation, but have no idea of its full ramifications. I occasionally take my infant son to a local sidings, he likes watching trains shunt around. He’ll point at a bunch of carriages, and ask me what they are, and I’ll shrug, too busy watching the circling buzzards and hovering kestrels that hunt around there. Thomas the Tank Engine? Always left me cold.

Trains, to me (and, I imagine, to the vast majority of the public) are simply something I expect to be able to use with a fair degree of convenience, punctuality and price. I pay, journey, alight. A good service should not require thinking about: it simply should be.

Then, my regular train stopped running, with just a few days’ notice given. I had no idea why: it was time to look a little closer.

On Monday June 21st, the hourly train from Nottingham to Matlock, via Derby, was cancelled indefinitely alongside other services: a total of 54 fewer trains each weekday from Beeston. Very little notice was given for this sudden axing of services. East Midlands Railways (EMR) had introduced a new timetable in May which – according to their sparse explanation – had failed to ‘perform to expectations’. It thus had to be urgently revised to ‘meet customer’s expectations’.

And just like that, the trains were pulled. If you can’t meet expectations, change expectations.

Quicker to get to Kent

I’d used that train for some time: living in Beeston, one station down from Nottingham, I appreciated the convenience of being able to reach the joys of the Derbyshire countryside on a single, regular train. My four year old son would accompany me on traipses around Cromford, Ambergate, and Whatstandwell, getting the fresh air and exercise we are told is necessary to keep us healthy and Covid-resistant.

On occasion, we’d drop into lively Matlock Bath, that bizarre hybrid of Switzerland and Skegness, and enjoy the plentiful ice cream, tuppenny shoves and cable cars that make the spa town a massively popular destination. That train line, coursing through the Derwent Valley, has been a lifeline in a difficult year.

The train was the only access we have: I’ve never driven, and have no desire to do so. This fume-filled island is already chock-full of traffic. While there is decent public transport, why bother with a car? But now, I’ll have to cadge lifts or figure out how to change trains to reach the foothills of the Pennines. A friend tried this, post-timetable change. They reported an epic journey of three hours, changing twice. Previously, this same journey was under an hour. It’s now quicker to reach the South Downs of Sussex and Kent than to get to the Peak District.

For me and other leisure commuters, it’s an annoyance. But for those reliant on the train for work, it’s a disaster. Neighbouring station Attenborough has had its trains into Nottingham totally scrapped. There is no bus service so commuters now have no option but to drive.

Why has this happened, and what does it tell us about the state of transport in this country right now?

Someone who does know much about trains is MP for Nottingham South, Lilian Greenwood. As a member and former chair of the Transport Select Committee, Lilian has long been on the footplate, witnessing how our rail network (dys)functions. Nottingham Station is in her constituency, as are thousands of passengers reliant on a good service.

“Many of my constituents are returning to public transport for the first time in many months and instead of the improved services they were promised, they are finding there are fewer trains or in some cases no direct trains at all,” she explains.

Furthermore, the cost of transport is becoming prohibitive: “In a year when the government has taken control of the railways, regional passengers on EMR are finding that under this Tory government that means fares rising by more inflation and services that are less convenient.”

The effect of this? “Some people, who have a choice, will simply decide to take the car instead – creating more air pollution, carbon emissions and congestion.”

Broken promises to the East Midlands

Sudden changes to timetables aren’t new. The notorious May 2018 timetable collapse across the UK lay bare the inadequacies of how a vital service, run with an obligation towards shareholders rather than passengers, was failing on a grand scale. Even the most free-market Tories realised that the whole system was fundamentally compromised. This latest debacle is not on that scale, but is very much indicative of a system that simply cannot square profit and service, with passengers the victims of the struggle to do so.

How does this all sit with the government’s policy of ‘levelling up’ the North and Midlands? Key to any economic development is a strong, reliable transport system. While the meaning of ‘levelling up’ has always been nebulous, this is surely not it? Lilian Greenwood again: “As so often under this government, the reality doesn’t match the rhetoric. Whether it’s Midland Main Line electrification, HS2 Eastern leg or improved local rail services, investment in the East Midlands is not being delivered as promised.”

Ewan Cooper is a rail expert. To him, the cancellations come as no surprise: “The whole network is a mess. In this case, drivers weren’t trained adequately before the new timetable was implemented so couldn’t implement the service: it was clear that this was going to happen beforehand. Covid played a part in this, but they knew it would all along and seem to be using this to deflect blame.

“The franchisee (EMR is run by Abellio, a firm owned by the Dutch state) over-promised and under-delivered. They took the franchise as other companies saw it was undeliverable and withdrew bids. The Department for Transport didn’t seem to care that this was always going to be the case.”

Lilian agrees. “Lack of competition is one of the reasons franchising has been scrapped. The government penalises train companies if they fail to deliver the published timetable so EMR will take a financial hit for the delays and cancellations from 16 May to 19 June. However, by introducing the temporary timetable – assuming they can deliver it – EMR will avoid future penalties. It’s not clear how Department of Transport ministers are protecting passengers’ interests when they face reduced services.”

Lilian explains that her Select Committee can “hold train companies, ministers and officials to account” but can’t directly compel EMR to restore the service, or penalise them in any meaningful way, despite a clear breach of contract.

These changes are rumoured to be long-term. My hopes for a summer exploring the beautiful local countryside are gone. Worse still, many commuters and businesses will take a serious hit that’s entirely out of their control.

Privatisation is at the core of Tory ideology – until something goes wrong, and the state has to step in: capitalism for the profits, socialism for the liabilities. It is hard to see how the current regime will ever implement a truly state-run service that puts passengers first.

Until then, aspirations towards a green ‘build back better’, improved public health and levelling up the Midlands, seem seriously off-track.