"Now I am become Death, the destroyer of worlds."These words were remembered by Robert Oppenheimer, after the first test of an atomic weapon. 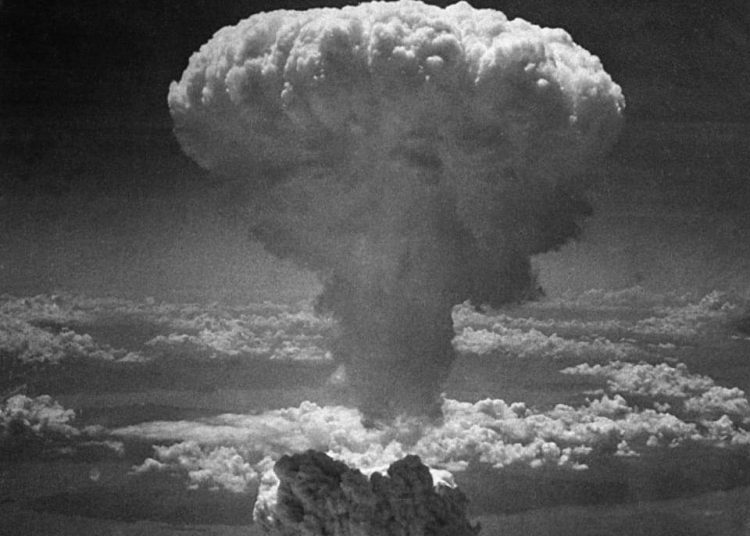 The nuclear bomb test reminded Oppenhiemer of the words Now I become death, the destroyer of worlds. This image is a work of a United States Department of Energy (or predecessor organization) employee, taken or made as part of that person's official duties. As a work of the U.S. federal government, the image is in the public domain.

In the Bhagavad Gita, a Hindu Scripture, is recorded the following verse:

These words were remembered by the American Physicist, J. Robert Oppenheimer, after he witnessed the first successful test of an atomic weapon on July 16, 1945, in the New Mexico desert. The Second World War was playing what the Allies, especially the Americans, hoped would be it’s final act. The conflict in the European Theatre was over. Democracy had prevailed over the monstrous tyranny of fascism. But in the Far East there remained one bitter, and fanatical enemy, preparing to make her final stand… Japan.

The Americans, who had fought their way across the Pacific from Pearl Harbor to Okinawa via such desperate struggles as Midway, the Philippines and Iwo Jima, were in no doubt of what lay ahead of them as they prepared ‘Operation Downfall’, the invasion of mainland Japan.

Divided into two phases, the operation was set to begin in November 1945 with ‘Operation Olympic’, the capture of the southern third of the Japanese territories. Followed in the Spring of 1946 by ‘Operation Coronet’ to take Tokyo and the territories to the north.

There is little historical debate that the cost in human life on both sides would have been catastrophic, as the Japanese sought to defend their homeland against the American invaders. Fleet Admiral William D. Leahy estimated that the invasion itself could cost 268,000 American casualties; and estimates by the United States Naval Department put the cost of the full operation at some 1,700,000 to 4,000,000 casualties.

Japanese losses are anybody’s guess, estimates have been given as high as 10,000,000 as the remainder of the Imperial Forces, together with a fanatically hostile civilian population summoned the spirit of the ‘Kamikaze’ (‘Divine Wind’), to resist the invasion. The most pessimistic estimates talked of the conflict lasting until 1950. The one hope was that the Japanese could be brought to the table before the invasion became a necessity. The test in New Mexico had made that hope a reality.

August 6th is a date which will forever be etched in the conscience of mankind, for it was on that day in 1945 that this new weapon, an irresistible device of previously unimaginable power, was unleashed for the first time in war, against the Japanese city of Hiroshima. Shortly after the bombing, the American President, Harry Truman said of the Japanese:

“If they do not now accept our terms they may expect a rain of ruin from the air, the like of which has never been seen on this Earth.”

And he meant it.
The Japanese hesitated, perhaps bewildered at the nightmare which had just been wrought upon them. But the Americans were in no mood for procrastination, and three days later a second device would be dropped on Nagasaki; at which point the Empire of Japan finally concluded that the game was up, and surrendered. The most catastrophic conflict in the history of humanity had ended.

‘Operation Downfall’ never took place; and whilst no one would dispute the terrible consequences of the atomic attacks, (some 129,000 died in the blasts, with that figure rising to nearly 230,000 from the effects of radiation), neither do I think we can dispute that ultimately, by bringing the Japanese to the table, they almost certainly saved many millions of both Allied, and Japanese lives.

The day Japan attacked Pearl Harbor and brought the United States into the Second World War, Isoroku Yamamoto, the Admiral who had reluctantly masterminded the attack, told his Officers: “I fear all we have done is to awaken a sleeping giant and fill him with a terrible resolve.”

Yamamoto did not live long enough to see just how terrible that resolve became. Those who did however, and the generations who have learned the history since, must surely conclude that it would have been considerably more terrible but for the events of August 6th and 9th, 1945.
And whilst the attacks have always been controversial, provoking impassioned debate on both sides, I personally have never once doubted that it was right to drop the bombs, and I remain of that opinion today.
It is also perhaps worth noting that for all their rivalries and posturing, their ‘Cold War’ and their Cuban Missile Crisis; human beings have so far never dared to unleash this terror again.

So in remembering the events of that fateful time in the story of our species, perhaps the best we can do is to pay homage to all those who have lost their lives in human conflicts, and continue to live in hope that we might learn a better way to settle our differences.
And to all those who perished at Hiroshima and Nagasaki seventy-six years ago:
Requiescat In Pace…’