Since 2008, Brian Clough’s statue in Nottingham city centre - Speakers' Corner - has been a popular spot for demonstrators and tourists. 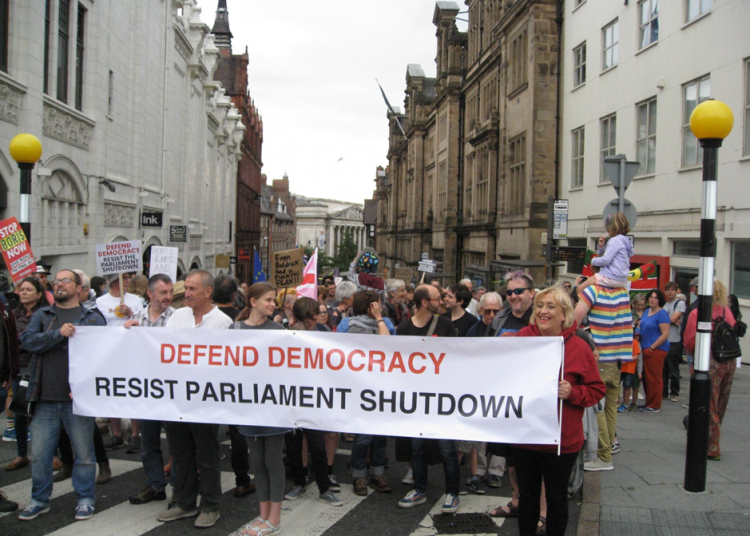 Since 2008, Brian Clough’s statue has been a popular spot for demonstrators and tourists. It stands proudly in Nottingham’s city centre just off the Old Market Square. It became the first Speakers’ Corner in the UK after an Act of Parliament in 1872 paved the way for the original in London’s Hyde Park. The site is at the junction of King Street and Queen Street at the edge of Nottingham’s historic Market Square.

Clough’s statue was unveiled on 6 November 2008 by Brian’s widow Barbara, watched by an estimated crowd of 4,000 people. The statue was paid for by the Brian Clough Statue Fund, a group of volunteers.

Brian Clough managed Nottingham Forest Football Club for 18 years between 1975 and 1993 and presided over the club’s most successful spell in their history. Clough regarded himself as a life-long socialist, supporter of the Labour Party and of left-wing causes.  It is little wonder that the statue attracts left-wing demonstrators as well as tourists.

Nottingham has faced political disturbances and even riots since the early 19th century. The Reform Bill riot of 1831 led to the Castle being burned down and battles took place in the Old Market Square.

The Suffragettes held a demonstration on 16 October 1906. It was the first of many Suffrage groups that were established in Nottingham, Mansfield, Southwell and Hucknall with many active members, also supported by local male civic leaders and members of the clergy, such as the Bishops of Southwell and Nottingham and many of the non-conformist churchmen. Amongst the more militant suffragettes was Helen Watts, daughter of the Vicar of Holy Trinity in Lenton.

According to The Guardian 2,000 protesters attended a demonstration in Nottingham against the war in Iraq. This was just one of many anti-war demonstrations. In December 2015 the ‘Stop The War Coalition’ held a rally around the Clough statue because of fears of US and allied bombing of Syria.

On 15 January 2015 Nottingham Police Commissioner Paddy Tipping joined Iman Khalid Hussain and Waheed Zaman, who were both from the KQZ Institute, an Islamic non-profit educational organisation based in Nottingham.

Tipping commented, ‘The events in Paris are tragic but here in Nottingham we want to show that we are strong and united, whatever background we come from.’ After the address, volunteers handed out roses to passers-by. Perhaps surprisingly, there was no opposition to this gathering. Paddy was referring to the killing of 12 and wounding of 11 others by two Islamic militants in the office of the Paris satirical weekly Charlie Hebdo just days before. The Charlie Hebdo shooting led to disorder and demonstrations all over the world. The Commissioner also said that Muslims had suffered more than any others world-wide from violent deaths. What he did not mention was that many of them were self-inflicted resulting from the Shia/Sunni clashes worldwide.

Violent clashes had, however, erupted before, as on 5 December 2009. An EDL spokesman said that his group had timed its protest to coincide with the parade of soldiers from the 2nd Battalion, The Mercian Regiment, returning from Afghanistan, but a handful of members left a city-centre pub and began abusing the UAF-organised gathering around midday. During the confrontation a group shouted abuse at the Asian students. Nottinghamshire police made a number of arrests. As night fell, hundreds of police officers escorted EDL protesters away from the city’s main shopping streets

The protesters brought Nottingham city centre to a standstill as hundreds marched through Parliament Street towards Glasshouse Street and King Edward Street while escorted by police officers.

The move to suspend Parliament, known as proroguing, caused outrage across the country, with more than one million people signing a petition to reverse the decision.