The ‘Remain’ voices at the #No2NoDeal Action Day virtual rally said they have not been silenced and they would not stop fighting for EU and UK values. 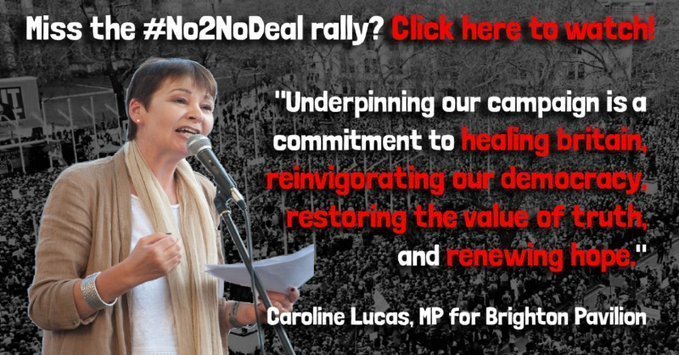 The ‘Remain’ voices at the #No2NoDeal Action Day virtual rally on 8 October said they have not been silenced and they would not stop fighting for EU and UK values.

The rally last week was the European Movement’s second virtual rally on this theme. The event featured speakers from across the political spectrum, including the Conservative party, reminding us that the current extremist government does not represent traditional Conservative values. Speakers included Michael Heseltine (Conservative) and Caroline Lucas (Green) as well as members of most UK parties – Labour, Liberal Democrat, SNP and others.

A recurrent theme throughout the event was the fact that there is no mandate for the Government’s current course on Brexit. The 2016 Vote Leave campaign, led by Johnson and Gove promised: higher spending on the NHS and other public services, greater powers and influence on the international stage, global trade arrangements and all with terms in our favour. The pro-Brexit leaders promised the ability to attract more business and investment to the UK.

Speakers told us that these promises will not be delivered with this Vote Leave government’s current Brexit trajectory. The electorate needs to be reminded of the lavish promises that their campaign put forward in 2016, many of which were reiterated in the 2019 Conservative general election campaign. But these promises are not being fulfilled.

The aim of the #No2NoDealcampaign is to mitigate or avoid the worst impacts of leaving the single market by holding the government to its commitment to achieve a good free trade deal with the EU (with the exact same benefits). This should be an entirely reasonable demand of a government that won the election on the basis of delivering an ‘oven-ready deal’. Several of the speakers, including journalist Polly Toynbee, warned of the government’s attempt to cobble together a ‘bare-bones deal’ or a ‘near no deal’, which would be almost as damaging as a ‘no deal Brexit’. They say the public, and parliament in particular, should not let a bad deal pass through unnoticed. Such an act of self-harm would be remembered.

The campaign will continue to make the public aware of the realities of Brexit and hold the government to account for the consequences, but the campaign no longer aims to stop Brexit from happening, as it already has. The way to stay in the single market would be by joining EFTA (Norway option) but the government has no plans to do this.

My personal view is that we know our future would be more prosperous, more peaceful and more outward-looking as an EU member, and that the terms of our membership were far more advantageous than any deal that the government can possibly negotiate. But we have had to shift our goal; for now, it’s about damage limitation. We are promoting close alignment and friendly cooperation with the EU so that we can retain as many of the benefits of EU membership as possible, which may include free trade, and alignment with EU standards on food, environment, and other such values. Until the time for rejoining is upon us, we must continue to expose the corrupt realities of Brexit and remind the public of the sunlit uplands that were promised.

Scottish Minister for Europe Jenny Gilruth told supporters that “going ahead with Brexit at the end of this year whilst the economy is reeling from Covid is simply reckless”, while Streatham MP Bell Ribeiro-Addy called it “incredibly self-destructive”.