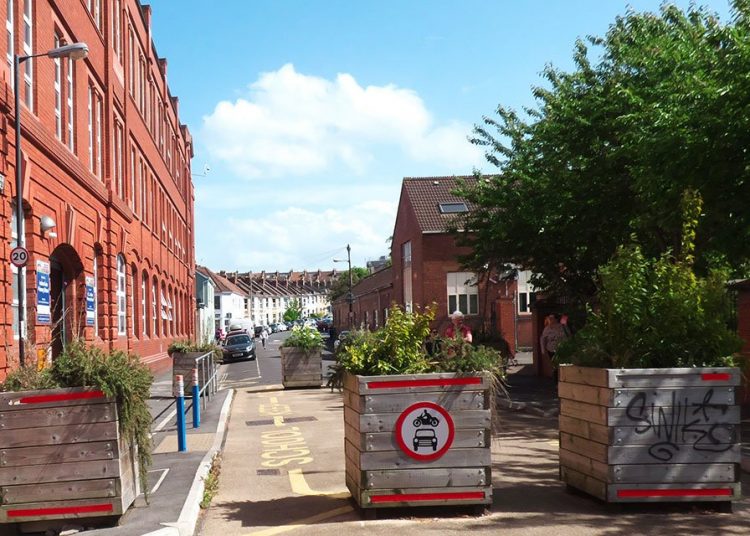 "Low Traffic Neighbourhood In Bristol 04" by samsaundersbristol is licensed under CC BY-SA 2.0

The Nosuchthingasafish podcast is a fascinating, funny, and insightful review of astounding facts, well worth a listen. It is made by the QI ‘Elves’ and one of the facts they exposed in their research is that there is only one ocean, there are no separate seas or oceans like the Atlantic Ocean, just one.

It is important to think about the world in this way regarding our interactions and conduct towards it, and another way of viewing the Earth is there is only one sky, which is particularly important to keep in mind when it comes to air pollution.

The Low Traffic Neighbourhood is a new feature in cities as a method of reducing traffic and pollution. These are streets previously open to through traffic being closed completely at one end, so residents can drive in to get to their house, but other vehicles can no longer pass through those streets to get to their destination.

In Kings Heath in Birmingham where I live, this has resulted in a protest by residents and businesses in the surrounding streets to the Low Traffic Neighbourhoods. The main objection is that the pollution and traffic problems are now much worse on their streets as the traffic is now concentrated into the surrounding roads causing traffic jams. It also means large queues of traffic are now sat in low gear where cars and vehicles pump out the most pollution.

A small number of streets are afforded the luxury of low to no traffic at the expense of everyone else and these schemes are to be extended in Kings Heath.

Having seen a Low Traffic Neighbourhood in Palmers Green in North London, a striking characteristic of both is that they are in middle to upper class areas which are not the worst victims of traffic or air pollution.

Many people wish to see the traffic and pollution significantly reduced or eliminated in the part of the city they live in but there is a whiff of nimbyism, snobbery and the ‘I’m alright Jack’ about the residents in these streets, whereas others have to put up with increased traffic and pollution a few streets away.

Proposals about traffic and air pollution are not consistent

There are few clear, comprehensive, or consistent proposals about what is to be done about reducing traffic in all neighbourhoods or traffic in the city in general.

In lots of ways this is a non-solution, as it is not doing two significant things which need to happen in cities to fix the pollution and traffic problems. Firstly, massively reduce the total amount of vehicles on the road and secondly, provide alternative transportation methods for people to use instead of a car which are affordable to all: fast, safe, reliable, healthy, and less polluting.

As air pollution is leading to untimely deaths, premature births, and health problems, alongside contributing to man-made climate change and the latest estimates are that eight million people a year are dying of air pollution worldwide. Eight million! That is approximately twice as many people who have died of coronavirus worldwide as this is written, every year, yet this is rarely if ever covered as a health emergency.

The solutions are out there, they will require investment but government – both local and national- need to be more ambitious and have more effective solutions.

Alternative transport as a solution

Firstly, proper investment in better public transport is needed. There can be a resistance to this as an idea because it is seen as an attack on the freedom of the car, and it is too problematic or expensive to put in new rail, tram, or other new methods of mass public transportation but these can be dismissed by the reality that cities are always being rebuilt and redesigned.

Joseph Chamberlain and the Cadbury family were behind the rebuilding of the entire city of Birmingham in the Nineteenth Century. Similarly a fully electrified underground system was designed and installed in London over a century ago (funded by a mixture of private and public money) which moves millions of people around the city every day.

If it can be done then, it can be done now and in more effective ways. Fears of spreading viruses can be dealt with in the design phase, by building a new system with better infection controls.

Walkways and cycle lanes are another solution for reducing traffic and air pollution. Walking, running, scootering, using a battery electric bike or a push pedal are all healthier solutions to sitting and being in a car. Building new paths for these are all possible, affordable, and current networks can be repurposed, and new ones made where necessary. Cities can be rebuilt for a greener, sustainable, and less polluting future despite any resistance or propaganda from predictable sets of interests such as oil lobbyists.

Then whole cities can be clean air, low traffic and low pollution zones.

In the way the London Underground is a good example of how you can resolve public transport issues with a mixture of private and public investment to build new transport systems, there is another solution which would reduce traffic. One of the biggest increases in traffic worldwide has been delivery vehicles, the main culprit of whom is Amazon. A reason why is the amount of vans and cars delivering mostly small, portable items around the city like, well, a bit like the Post Office does or did.

A far better solution than out of town warehouses is delivery and sorting offices in cities. Then rather than have thousands of cars and vans delivering to houses, a smaller amount of vehicles transport items in bulk into a sorting office, then workers can walk them to your house in carts like the postman does or you walk to collect. This will hugely reduce the amount of vehicles on the road as the scale of the delivery can be concentrated into fewer vehicles.

The government need to be more serious about reducing pollution

There are solutions out there but it is difficult to take seriously claims from the government about forging a green future unless the real problems of too many cars and vehicles are confronted.

Without grants, electric cars are unaffordable for many, but electric cars do not deal with the problems of traffic. They come with energy production, rare metal, or mineral issues too, the extremes of which are child slavery and militarism. They do not deal with a poor or underfunded public transport system, or an unsafe, sporadic or mostly non-existent cycle or walkway system, or that with more thought through planning for local services, businesses and amenities, this could mean you do not need a car at all to be able to get around for most things.

This government is not serious about reducing pollution or traffic in cities otherwise there would be more proposals in the public debate about this, and their main policy announcement so far has been a road building programme. So, beyond vague rhetoric and slogans of building back better, little that can be classed as properly significant or in the scale necessary, is happening in regard to these issues.

As the protest banners state, we all need clean air too, less traffic, and minimal to no pollution in towns and cities. Low Traffic Neighbourhoods do not address these problems sufficiently, they make it worse for others, concentrating the pollution and traffic elsewhere, and the benefits this small minority of the population see are not open to the rest of the city.

Returning to the fact there is only one sky. Eight million people dying of air pollution annually in a decade is more than those who died in the Second World War. With the increase in droughts, floods, wildfires, and temperature caused by air pollution, with emerging threats to food security and stability and supplies of fresh water: those numbers are likely to increase significantly.

As citizens of cities, citizens of the countryside, citizens of the world, as human beings who all depend on the biosphere, then surely we have to do a lot better and demand more than Low Traffic Neighbourhoods, which do not significantly lower the amount of traffic anyway!

Robert is new to the world of essay writing but likes writing about politics, Brexit, problems with democracy, environmental concerns, and ideas that he thinks are important in trying to establish sustainable and stable societies.