Mark Vaughan on how tax-payers are not represented when they have no voting rights. How do we decide who votes? 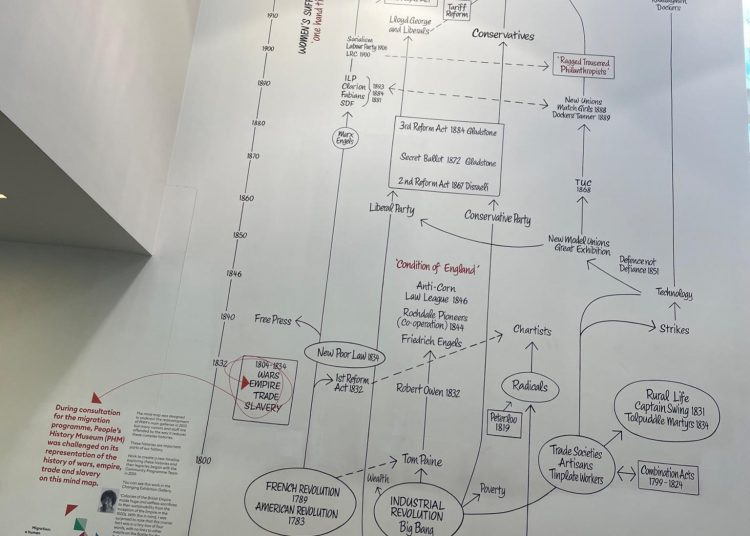 The right to vote through time

In the atrium of the excellent People’s History Museum in Manchester is a ceiling-high timeline which ascends through some of the key milestones in the ‘Battle for the Ballot’. Beginning with the English Civil War and the politics of the Levellers the timeline includes the Chartists and the Reform Acts of the 19th century, the women’s suffrage movement of the early 20th century and finally concludes at the ceiling with the Representation of the People Act of 1948. They will soon need a taller atrium because the battle for the ballot continues to this day, not least for the millions of migrants still shut out of the United Kingdom’s democratic life.

Migrant disenfranchisement is primarily an issue affecting those residing in England and Northern Ireland. Fortunately Wales and Scotland have implemented a policy of residence based voting rights; if you live there you can vote in both local and Senedd or Holyrood elections regardless of your nationality.

The vote for EU citizens

It is well known that EU citizens residing in the UK were not eligible to vote in the referendum that turned their world upside down. Since then uncertainty has prevailed over whether or not their right to vote in local elections would be maintained as this was not covered by the Withdrawal Agreement from the EU. This issue came to a head in the 2019 EU Parliament elections where many EU citizens were prevented from voting.

The Elections Bill which is currently passing through Parliament purports to settle the issue in England and Northern Ireland. Yet instead of extending the franchise it would ultimately restrict it. Those who were residing in the UK before free movement ended on 31 December 2020 and hold status through the EU Settlement Scheme will retain their right to vote. Those EU nationals who have arrived since 1 January 2021 and hold status under other routes of the UK immigration system will only be able to vote in local elections if they are a national of a country with whom the UK has a bilateral agreement on voting rights. This list is currently limited to Poland, Portugal, Spain and Luxembourg. To further complicate matters nationals of Cyprus and Malta will retain their voting rights because they are also commonwealth citizens.

The pursuit of bilateral voting rights agreements is a contradictory strategy when you consider that some countries including Slovakia and Denmark already unilaterally adopt a policy of residence based voting rights.

What about non-EU migrants?

The current government position is not encouraging. A spokesperson was recently reported as saying:

“For those who arrive after that point [31 December 2020], the Government is open to negotiating bilateral agreements with European Member States in order to retain existing voting and standing rights, but does not intend to expand this process to non-EU countries where no such rights currently exist.”

This begs the question: what about non-EU countries where such rights do exist, such as South Korea?

Residence based voting rights would enshrine into UK law what should be a key principle underpinning any modern democracy. Recently and succinctly expressed by Brigid Jones, deputy leader of Birmingham City council:  “one of the fundamental points of a democracy is that those who are subject to laws should have a say in who makes them and what those laws are”.

Extending to England and Northern Ireland a policy already implemented in Scotland and Wales would ‘level up’ voting rights across the UK. The drafted Elections Bill fails to uptake this opportunity and instead further complicates the rules governing who does and does not have the right to vote.

A residence based voting rights amendment

EU citizens’ rights group the3million have been advocating for such a policy since long before the Elections Bill was introduced. Recently an amendment to make residence based voting rights a reality in England and Northern Ireland has been drafted by the groups Young Europeans Network (YEN) as part of their OurHomeOurVote campaign.

YEN Co-Manager Lara Parizotto sees the proposed amendment as an opportunity to raise awareness with local and national politicians and the wider public:

“Whenever we do voter registration drives, the question of who can vote always comes up. It’s heartbreaking to be running a stall and have to tell a Brazilian who has been living in the UK for over a decade that they cannot even vote in local elections but that their EU friends can. However, the Elections Bill will only make it more complicated for migrant voters to understand eligibility. At the end of the day, we are all equally affected by the services we fund with our taxes. We should all have a democratic say”.

Encouragingly both Keir Starmer and Ed Davey have recently indicated some support for the idea.

The London Assembly recently carried a motion in support of residence-based voting rights. Combined with Birmingham’s example and the growing number of signatories to the YEN’s “open letter” this proves there is potential to build a movement for residence based voting rights from the grassroots and local government levels.

And so the battle for the ballot continues.

Our communities are international and diverse. Over 14 per cent of the UK population was born abroad. This rises to more than 35 per cent in London and 19.5 per cent in the West Midlands.  While so many of the residents behind those figures have no say in who represents them we cannot claim to have achieved universal suffrage. Under a residence based voting rights model around 1.4 million UK residents would gain the right to vote. Our communities would be stronger and more democratically complete with the addition of those voices.

North Shropshire by-election: could yellow be the new blue?