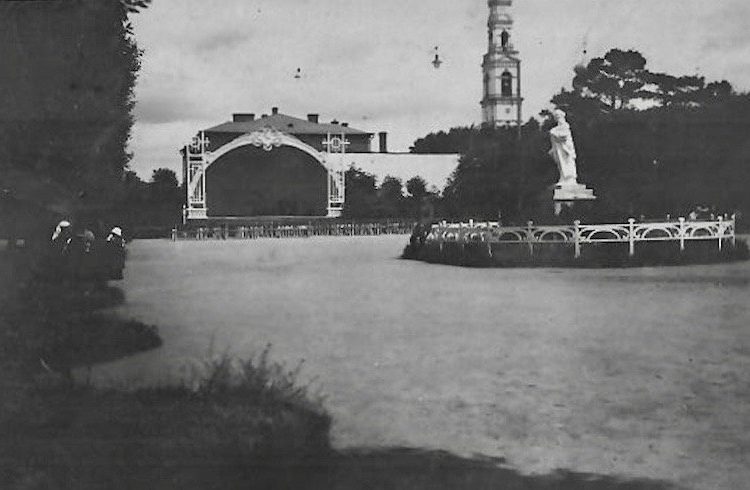 After their extended stay in Omsk, the 1/9th Hampshires were ordered to travel west to Ekaterinburg at the foot of the Urals mountain range where the continents of Europe and Asia meet.  They arrived in May 1919.  Ekaterinburg was the city where the Bolsheviks had executed Tsar Nicholas II and his family the year before.  Mr Drake shows us a photo of the building where the execution took place.

The arrival of the Hampshires was essential in the formation of the Anglo-Russian Brigade.  This Brigade was commanded by British officers but made up of Russian peasants.  We have two photos of the Anglo-Russian Brigade which Mr Drake refers to as the “new Russian army”.  It seemed that some sort of action was imminent.  There were those who expected the joint forces to march on Moscow together.

However, there is no evidence in the photograph album (or anywhere else) that the Hampshires ever saw any active service in Russia.  Which is perhaps why my godmother’s father had time to take photographs, acquire postcards and assemble the album and why it has survived and been handed down to me.

Mr Drake shows us photos of the quiet, almost deserted streets and the pleasant “club gardens” of Ekaterinburg.  It is a grand looking and historic city (named after Catherine the Great).  The winter is clearly over, which is just as well as there is a photo of barefoot refugees queuing for food.

The Hampshires were withdrawn from Ekaterinburg early in August 1919 when orders were received that they were to return home. They retraced their steps and sailed from Vladivostock on 1 November 1919. We see a photo of the men crammed together on the deck of the departing ship They travelled across Canada arriving back in Southampton on 5 December 1919.  They had spent just over a year in Russia and had traversed the entire continent of Asia, from Vladivostock in the west to Ekaterinburg in the east.

I find myself wondering what the Hampshires made of their extended trip to Siberia.  Were they glad not to have seen any action?  Did they feel it was a pointless exercise?  What did the Russian peasants who joined the Anglo-Russian Brigade make of it?  Especially when the Bolshevik Red Army took over. What happened to them and to the hungry refugees?

According to historians, the overall effect of the intervention in the Russian civil war (of which Mr Drake’s adventures formed but a small part of a very large and complex picture) is to have created hostility and suspicion between Russia and the West which still persists over a hundred years later.

We are still living with the consequences of Mr Drake’s Siberian adventures.

If you have enjoyed these old photographs and would like to see more, then take a look at the Imperial War Museums website:

For more information on the Hampshires see: https://www.royalhampshireregiment.org/about-the-museum/timeline/19th-battalion-russia-1919/