Melton Mowbrays's bypass highlights the levelling up problems of a disconnected Tory council between infrastructure and development. 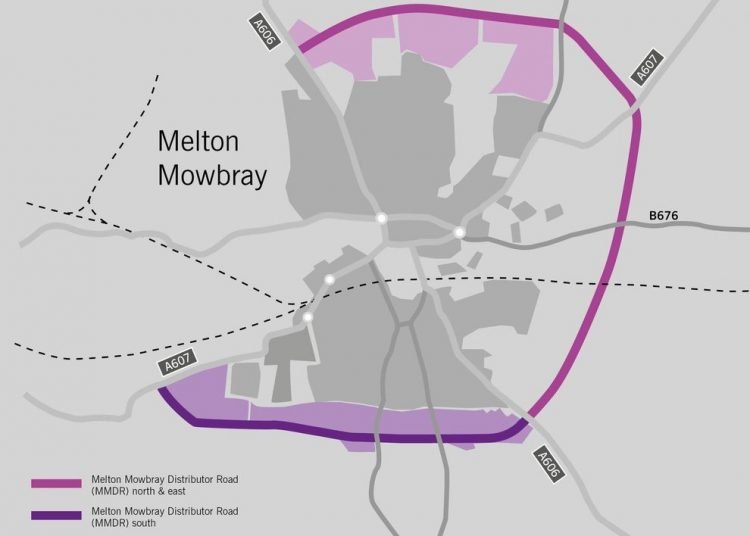 Source Melton Times: The route of the approved Melton Mowbray Distributor Road (MMDR), to the north and east, and how it would join with the planned southern link section EMN-200618-180953001

When councils fall out with one another in such an acrimonious way to hit the headlines one would expect them to be at different ends of the political spectrum. Not so when it comes to Melton Borough (MBC) and Leicestershire County (LCC) Councils, both Tory run, who have got themselves into a particularly bitter public row about a section of a bypass. The southern section, to be precise.

Local planning is not everyone’s idea of fun but, like much of what local government does, it is rather critical to improving the day to day lives of ordinary people. For decades, the issue of a bypass – or rather lack thereof – has exasperated Melton Mowbray residents experiencing the impact of increased house building and heavily congested roads.

Whilst generally accepted as a problem for the town, the prospect of anything actually happening to address this had reached almost unicorn levels of urban myth by the time studies concluded in 2017 that, Melton Mowbray “cannot cope with the levels of road traffic created by its residents, business and through traffic.”

Ask any local, and they could have told you that for free. However, the study and subsequent consultation proved helpful in getting things moving, so it started to look as if Melton Mowbray would get its bypass after all. Sort of.

What was agreed by the two councils is known as the North and East Melton Mowbray Distributor Road (MMDR). Not quite a full bypass, but by no means an insignificant achievement. Great news. Sort of. There remains an additional southern section which MBC are keen to build at the same time but is much less straightforward and requires a functioning partnership between the two local councils to achieve. This is the source of the impasse.

Ongoing arguments between the Tory partners revolve around money and whose job it is to secure it. Tensions between the two councils have been running high about this since June 2020 when LCC decided it was too risky to shoulder the burden of the southern scheme, blaming MBC’s inadequate Masterplan for failing to outline satisfactorily how the funds from housing developers, a crucial component, would be recouped to justify their backing.

In an extraordinary move illustrating just how bad relationships between Leicestershire Tories have got, Melton councillors resorted to starting a petition on the platform change.org to their own colleagues at county hall. The petition has been largely welcomed by Melton residents attracting well over 2000 signatures to date, but one wonders why picking up the phone wasn’t enough. Given that there are Tory MBC councillors who also sit as LCC councillors, it seems even more bizarre that a change.org petition was ever seen as a necessary form of communication between those involved.

The serious consequence of this is that local taxpayers now find themselves in the peculiar and rather costly position of paying councillors twice, to argue against themselves.

The row escalated ahead of a recent cabinet meeting on Tuesday 22 June, after LCC published a report indicating they were set to decline a £15million grant it had successfully applied for to help fund the work, blaming MBC for the move. This was met, unsurprisingly, with a robust response from MBC as well as local Tory MP Alicia Kearns who has waded into the row on MBC’s side.

The net result of all this public posturing is that the item was withdrawn at the last moment from the cabinet meeting, with LCC agreeing to further discussions. Whilst MBC and their supporters chalked this up to momentous success, beyond the theatre, the fundamental issues remain; the road needs to be paid for. Of course, central government could just ensure their grants cover the actual cost of local development. Or they could stop choking the budgets of county councils who are increasingly nervous of over-spending (no doubt a factor here).

The elephant in the room is that, whilst disagreements between the two councils over budget responsibilities rumble on, the housing developers will be quietly pleased the focus is not on the rather obvious way in which they are able to hold everyone to ransom. As key contributors to essential infrastructure like schools and roads, they are able to keep cash-strapped councils over a barrel, giving them little choice but to be grateful for whatever they can get to help balance the books. Even if this may mean fewer affordable homes for residents.

Public spats and blame games usually go hand in hand with political point scoring. But when it comes from members of the same party aiming fire at each other, it can’t be dismissed as ‘just politics’. Underneath the technical slanging match, this argument reveals that something is fundamentally wrong with the three arms of government if they cannot even work together successfully when supposedly on the ‘same side’.

Not so grown up politics

Melton Mowbray perfectly illustrates how our current system of government is playing out. The party of government leaves local councils led by the same party high and dry whilst house builders hold residents to ransom over infrastructure; a Tory County council is too disengaged from local people to advocate properly for their interests; and a Tory Borough council is ineffective at convincing even friends and colleagues to back them in what is a scramble for the ever-dwindling pot of money available.

Rather than ‘levelling up’, Melton Mowbray’s fate might be better summed up as an unfortunate child caught in the middle of a bitter row between parents who are buckling under the weight of their money problems. One day the government may realise that trading one area off against another isn’t a sustainable answer to the big issues of building back better.

Meanwhile their local party turmoil risks losing desperately needed investment for a rapidly expanding town. Whilst everyone hopes they get their act together before it’s too late, the cost of this argument to local residents who usually trust the Tories to look after them remains to be seen.