A proposal for the Mallard Pass solar plant is proving controversial. Is it an appropriate development for local communities and wildlife? 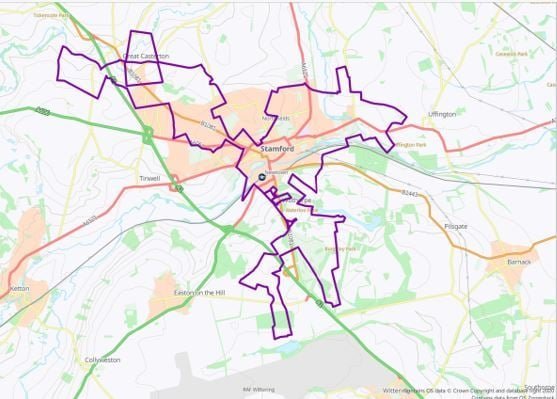 Proposed size of solar farm - overlayed on map of Stamford for size context.

In November, envelopes appeared through the letterboxes of homes in the area of South Kesteven, Lincolnshire and Rutland announcing that ‘Mallard Pass Solar Farm is a proposal for a new solar farm with energy storage and infrastructure to connect to the National Grid’.

The marketing material was slick, full of environmentally-friendly imagery and went on to advise that this was a Stage One Consultation. It introduced the project as a Nationally Significant Infrastructure Project (as it proposes to have a generating capacity exceeding 50 megawatts), with the proposed land required to be 2,175 acres.

Consultation would run from November 4 to December 16 – so residents had six weeks to familiarise themselves with the project, attend in-person or virtual events and submit their feedback.

Upon closer inspection, it became apparent that the public consultation events were to be done only at the developer’s discretion. In reality, this was more about public relations and less about consultation.  As time has passed, residents in the affected area have come to understand the sheer scale of the proposed development which is to take place in a largely rural and agricultural area. Major concerns have been raised.

Residents came together to discuss their concerns and understand each other’s perspective. There arose an overriding sense of major concern mixed with conflicted emotions; pretty much every resident who has articulated their worries about the project began their contribution along the lines of, “I understand the need to move to a zero carbon world and to do more and faster to protect our planet and precious resources but… this?”

In total, eight villages could be impacted by the project.  Those most affected would find themselves almost entirely surrounded by the solar plant which would mean a previously open, big-sky agricultural landscape would disappear under solar panels and behind miles of security fencing.

The springboard for the proposal seems to be feeding electricity into the Ryhall substation (built in 2016) near the East Coast railway which has the potential to power approximately 92,000 homes from the National Grid. But at the time of the planning decision for the substation, there was no mention of it servicing anything other than the electrification of the East Coast railway line.

The impact to the local area has become increasingly clear, especially in terms of the infrastructure, ecology, loss of agricultural land and flood risk. Moreover, a little background research reveals that whilst the project company is a UK-Canadian partnership, the financing is Chinese.

This has fuelled concerns over the environmental cost of transporting the solar panel materials and infrastructure from the manufacturers in China and also around broader issues of the use of Uighur slave labour in production of solar panels.

Strategy, what do you mean, strategy?

It has become clear that this project is in no way part of a government-led national strategy to secure the country’s future energy needs.

Whilst researching for this, we have found only a government-stated position with an expectation that industry comes in and fills the vacuum. This no longer obligates the government to concern itself with balancing strategy against the unique needs of the population. In this project though, the final decision on go/no go sits with the Secretary of State for Business, Energy and Industrial Strategy (currently Kwasi Kwarteng).

In the weeks since the Mallard Pass Solar Farm project first came to light, it has become apparent that there are numerous other solar farm planning applications around the country although hardly any seem to match the size and impact of Mallard Pass.

If there is no national strategy in place to ensure that we balance the country’s future energy needs with local and environmental impact, how can these development applications be consistently judged as appropriate or otherwise? At the risk of straying into conspiracy theory territory, it would seem as though local councils and authorities are being swamped with planning applications in an attempt to fumble as many through as possible.

At the same time, websites (e.g. leaseyourland.co.uk) have appeared which promise struggling farmers and landowners an annual guaranteed ~ £1,000/acre rental for a 40-year term if they sign up to turn their land over to solar farm projects. That must be tempting for those who, in a post-Brexit world, are struggling financially. They have already suffered the double whammy of the loss of EU subsidies and the loss of trade with EU countries as an export market.

The December consultation deadline has passed and affected residents have no indication of how many responses were submitted, let alone received answers to their questions. The fear is that the concerns and objections could be written off by the developers by re-shaping their proposals to make it almost impossible to object.

At the time of writing, one of the two MPs for the area has come out in active opposition to the project, in line with the concerns of the majority of residents. As Alicia Kearns MP (Con. Rutland and Melton) stated to the Stamford Mercury:

“…the 2,175 acre Mallard Pass Solar Farm is not the answer. At eight times the size of the largest current solar farm in the UK, its sheer size is wholly inappropriate for our community, wholly inappropriate in its construction on high quality agricultural land rather than brown belt and would be destructive to our communities, our local wildlife and environment and our way of life.”

Strong words, but will they be followed by actions? And what actions would be enough to solve this intractable situation?