My love of badgers began when I was seven on finding a badger’s skull in a Derbyshire wood near my home. 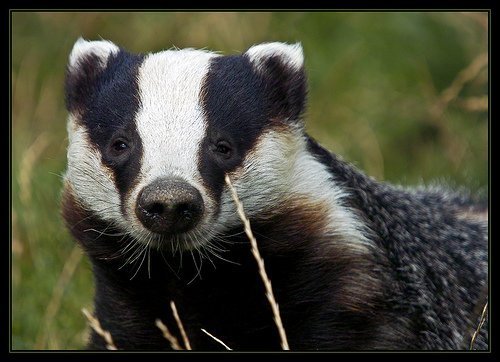 My love of badgers began when I was seven on finding a badger’s skull in a Derbyshire wood near my home. I could not have been more excited had I discovered a brontosaurus. In wonder, I stroked the large sagittal crest and carefully manipulated the non-detachable lower jaw. Immediately I felt a transcendental interconnectedness, an intensification of the sense I already had, that we humans are part of nature, not its overlords.

Badgers became a childhood obsession. I wore black and white clothes and pretended to be one, snuffling my way out of bed in the morning as if surfacing from my subterranean den. I was fortunate to have a father who accompanied me on badger watching excursions. We spent many hours crouching upwind from setts, trying to breathe quietly, not to fidget nor flinch when the gnats bit. Although we had no sightings, it was enchanting to experience the wood at night, the kee-wick twoo of tawny owls and sharp smell of the dog’s mercury.

In 1967 my family moved to the arable lands of Lincolnshire. I found it a wrench, but a wonderful surprise was in store. When out on my bike I spotted large earth workings on a steep bank. They were in a tiny copse on the edge of a large wheat field. This seemed an unlikely location but yes, on closer inspection I found well maintained setts and fresh latrines! The watch resumed.

No one forgets seeing their first badger. My eyes had been transfixed on the same spot for some time. I was convinced that if I wished hard enough, the dapper humbug striped face would, just as in the nature programmes, emerge from the earth to tentatively sniff the air. Instead, I was startled by rustling from the opposite direction. I turned to see an imposing small bear-like creature approaching along the path, strutting like a sumo wrestler with a rolling gait, broad shouldered with nose down. Unconcerned, intent on his mission, Brock ambled within a few yards, his musky smell wafting towards me. Then he dematerialised like a ghost into the dusk. The encounter far exceeded my expectations. I had met the king of the woodlands, whose ancestors had been here for at least 250,000 years, long before man tried to dominate the planet. However, my ecstasy was short-lived. On a subsequent inspection I encountered a scene of horror and devastation. The setts had been blocked; the badgers gassed. Later the trees were cut down, the land ploughed up. My heart was broken. This enigmatic and engaging animal sacrificed for man’s greed for a tiny strip of land.

The Badger Acts of 1973 and 1992 gave badgers protected species status acting as deterrents to wanton killing. But then Bovine Tuberculosis (bTB) reared its ugly head with DEFRA implicating badgers in its transmission to cattle. The Badger Trust and Wildlife Trusts’ counter argument cites evidence that the cattle herd not the badger clan is the primary conduit. They also claim that shooting badgers can exacerbate the problem, spreading the disease to wider areas.

In September 2020 the badger cull expanded to new areas of the East Midlands (Derbyshire, Leicestershire and Lincolnshire). This is despite Lincolnshire being a low risk bTB area and Derbyshire having run the biggest, most established badger vaccination programme in the country. Local badger groups are doing what they can to oppose the cull by protests, writing to MPs, encouraging people to sign petitions, doing sett surveys and organising wounded badger patrols.

However, the outlook is grim. As reported by the Badger Trust, ‘Based on the maximum kill figures published by Natural England, up to 62,000 badgers could be killed by the end of 2020.’ This may result in areas of local extinction and our children being deprived of the thrill of badger watching that I was so fortunate to enjoy.

The current pandemic crisis has for many led to a renewal of interest in nature and an appreciation of its restorative benefits. We are exhorted by David Attenborough and other environmental activists to do what we can to save our wildlife as the situation is critical. I hope my short article will encourage you to consider the plight of our beautiful badgers.

A bucketful of challenges: lone parenting in the Leicester lockdown