We heard that our PM had actually authorised the animals of Pen Farthing to be evacuated from Kabul as the Taliban took Kabul. In 2021 PM had said this was nonsense. 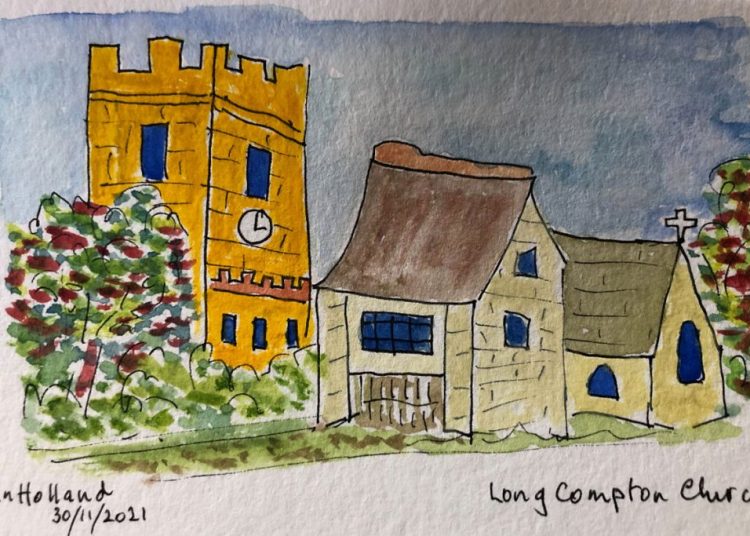 Long Compton is a beautiful village with 750 villagers and has one of the most classic, timeless churches in the Cotswolds. There was an earlier sixth century church, over which the thirteenth century one was built. There is a story that St Augustine came to the village in the 6th Century to preach a sermon.

The houses vary from the 13th Century thatched cottages to modern homes. The village is linear, over a mile long. New buildings have spread across parts of the village as there is a school, a shop and a bus or two!

Within a few miles there are many historical buildings such as the famous Rollright Stones and Chastleton House. Chastleton has been in the hands of a single family since the seventeenth century. Now run by the National Trust, it is well worth a visit. The Rollright Stones used to be very peaceful. Now it is an important place to visit.

There are several chapels in Long Compton including the Methodist Chapel, Congregational Chapel and the Friends Meeting House (now a residential house). The Lych Gate, the Manor House Moat, Long Compton Mill and the five drinking fountains are worth a look.

No one could miss the delightful Red Lion which was originally built as a coaching inn in the Cotswolds in 1748. The food is delicious, the garden lovely and service always excellent.

The Primary School, with its new nursery and reception building, is delightful and well appreciated. I have been a Governor for many years.

The village hall is spacious and well used with clubs, meetings, events and activities taking place.

There is also a small industrial estate with workshops, units, offices and storage.

Weston Park, partly in Long Compton Parish, is straddled across Margetts Hill with exquisite views across several vistas. There are many pleasing walks such as the MacMillan Way. Weston House was used by the Sheldon family in the 16th centuryas their family home and has the famous tapestry workshop. The house no longer exists.

The village has activities such as a book club, a craft group and a garden club, among others. It is definitely a village which looks after its residents.It has a lovely magazine called The Link. It is just a few miles away from Chipping Norton.

All day there have been reminders of the Holocaust. My old school will have had special assemblies. Each newspaper, TV programmes and social media remind us of the victims of genocide.

Six hundred candles were lit at York Minister Chapter House in the shape of the Star of David to remember the six million Jews murdered in the Holocaust, as well as those murdered in Bosnia, Cambodia and Rwanda.

It is 77 years since Auschwitz concentration camp was liberated on 27 January 1945. Today we remember the murdered millions: Jewish people and disabled, gay and Roma people.

On BBC 2, Survivors -Portraits of the Holocaust was a Prince Charles project commissioned from seven leading artists.

Each painted the survivors who are in their nineties now but were children in the camps.

‘All that hatred does is to create hatred‘.

The paintings will now go on display first at Buckingham Palace and later at Holyrood house.

If you can, watch and ponder on the programme.

In 2019 I went to Leipzig, and we spent a day at Buchenwald.

Yesterday evening we heard that our PM had actually authorised the animals of Pen Farthing to be evacuated from Kabul as the Taliban took Kabul. In 2021 PM had said this was nonsense.

The evidence was on a leaked email, which was shown on ITV and the BBC and featured in many papers.