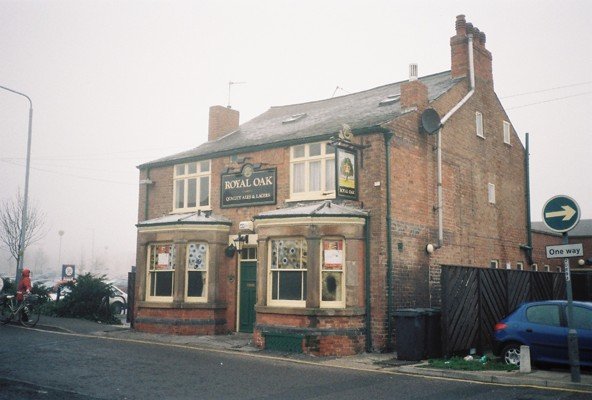 Beeston, a suburb just outside Nottingham, was once famed for having a greater concentration of pubs than any other town in the UK. While this is a contentious claim, the town still has more than its fair share of places to meet and drink. A recent book from the renowned poet John Lucas about a (sadly erstwhile)  Beeston pub, part memoir, part social history, ’Closing Time At The Royal Oak’  leads the reader to consider what this means, what pubs mean. We’ve had over a year without them in their usual form: I imagine many of us have had similar contemplations.

Pubs occupy a strange place in the British psyche. We all have some Platonic Form of what a pub should be like, as Orwell did with his Moon Under the Water, usually involving a traditional look, oak beams, brass-clad bar, and comfy nooks. Yet a pub can have all this and still fail if another element is not present: ambience. If you’re drinking with friends in a place where there is no sense of a communal buzz, then you might as well save cash and shoe leather and stay at home. The pub is more than a place to drink: they are a cornerstone of radicalism.

This may offend those whose journey into progressive politics is taken down via more religiously abstemious traditions: Keir Hardie was a fervent evangelist of temperance; Harold Wilson cited Methodism above Marxism as the driving force behind the formative Labour movement. You’d have not found the Tolpuddle Martyrs in their local: they were devoted Methodists, after all.

Yet pubs serve a purpose described by the US Sociologist Ray Oldenburg as the ‘Third Place’: that area outside work and home that we choose to occupy and which provides an invaluable social function. Pubs fit this category perfectly, neutral spaces where people from all social strata are equals. From here, things foment. Stories are told. Ideas are shared. Radicalism thrives around a pub table more readily than when preached down from a pulpit.

This theme runs through Lucas’s excellent book: he arrives at the pub as a young academic, but any donnish pretensions are put aside when he mingles in the pub. Here, he tells tales about characters it would be doubtful he’d meet in any other aspect of his life: those scraping a living in the grey (and often black) economy; those who, tongues loosened after pints of Shipstone’s Mix, would give insight into lives lived strange.

He talks of Labour Party meetings held in backrooms, and how the local branch of CND – amusingly titled Beeston Anti Nuclear Group: B.A.N.G – would find their meetings infiltrated by suspected agents of MI5, recognisable for the awkwardness and formal attire they’d arrive in.

Yet it’s not the formal meetings that keeps the radical heart beating: it’s the serendipity.  As a budding journalist starting my own community publication, I’d find the most effective way of sourcing stories was to just be in a pub: inevitably, something would happen, a tip, an anecdote, beer loosening tongues. Before journalism, I worked extensively in pubs, and would marvel at the sheer range of information that could be gleaned. I’d watch members of the waistcoated landed gentry mix with the group of hi-vis clad building site labourers; the fresh-off-his-shift postman chat literature with the in-for-a-lunchtime-stiffener school teacher. Where else could these random encounters occur? Journalism was just getting the other side of the bar, and taking more notes.

Perhaps the most powerfully thrilling book about pubs, and one that had a profound effect on contemporary society, was Alan Sillitoe’s classic debut, the raging Saturday Night and Sunday Morning (1958). The book opens with its nihilistic anti-hero Arthur Seaton tumbling down a flight of stairs in a packed pub (just up the road from Beeston) after a furious drinking competition. From thereon, the pubs of Nottingham play a leading role as crucial to the book as any other character. Sillitoe correctly recognises that they are places of catalyst, and places with utterly distinct character created from the individual characters within. Put simply, locals make a local.

The deep emotional understanding of this in the British psyche is crucial for informing any talk of collectivism, and from there, socialism. It would be naive to say pubs are levellers – after all, they work within their own reputational hierarchy across an area – but they are public, they are centres of free expression, expression made more free by the disinhibiting effect of booze. We are famed as an emotionally repressed nation, yet there is little evidence of that to be found as the night grows older. Liberation through libation.

As we emerge from lockdown back into pubs – albeit just in the garden for now – it is important to see the part they play. Under attack from restrictive PubCos, cost-cutting supermarkets and greedy developers seeing the potential to turn public houses into private houses, pubs were already under attack on many fronts before covid forced them to shutter. Wetherspoons, a pub chain ran on the most cynical principles, would happily see itself as the only saloon in town.

Which leads neatly onto a conclusion of sorts. Around the time John Lucas was supping in the Royal Oak, Wetherspoon’s founder Tim Martin was a student at the University of Nottingham, and would frequently be supping in The Durham Ox,  a pub around the corner from Lucas’s local. A contemporary of his once told me he’d constantly point out the failings of pubs, and set out plans to reimagine them. Soon after, the first Wetherspoons opened in Muswell Hill.

Lucas’s book is therefore especially welcome, and a reminder that while pubs may bring us Tim Martin, they also inspire much more: a place where we can see a better world.

At least until the crash of the closing time bell. Cheers!