LGBT+ attacks still take place, has anything really changed since the 1980's despite improvement in technology and support? 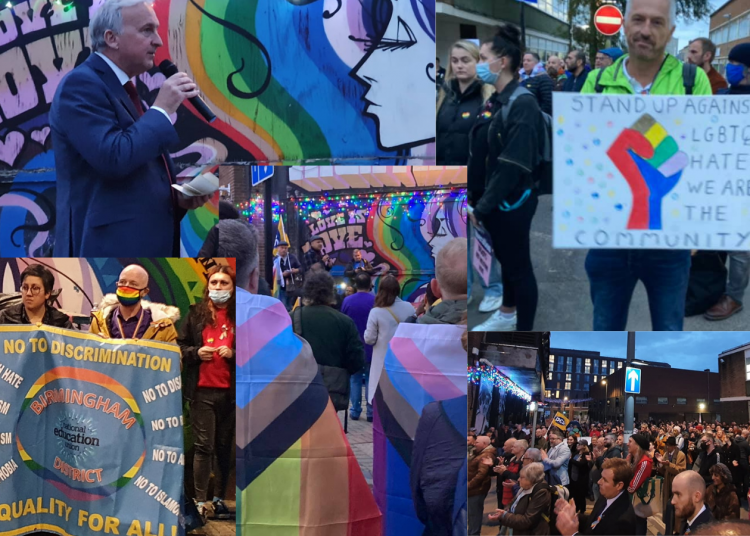 The nation had just hailed the same sex Strictly Come Dancing opening sequence as the best ever, and saw three “tens” given to its first same sex male couple. Just a few hours later, yet another two vicious homophobic attacks happened in Birmingham’s Gay Village.

All John-Paul Kesseler had done was walk down the street holding another man’s hand. Mr Kesseler had himself been a hero when he helped another victim some weeks earlier. And just a couple of hours after Mr Kesseler’s attack, yet another homophobic crime was commited when Daniel Costello was beaten up.

Alarmingly, Birmingham Live reported that Mr Kesseler’s “attacker fled, leaving the injured 38-year-old bleeding on the roadside”. The victim and his friend were then subjected to homophobic taunts from passers-by who said: “We don’t agree with that LGBTQ stuff.”

One of my favourite sayings has always been “to disagree about homosexuality is as pointless as disagreeing with rain”. Another is that homosexuality is a feature found throughout the natural world, but homophobia has so far only been found in humans.

A few days after the latest attacks, the LGBT+ community came together in protest against the attacks including Birmingham City Council Leader Ian Ward, expressing their disgust and announcing a raft of new measures to try to deal with the situation. Another protest is scheduled in Birmingham for Sunday 24 October.

Sadly the latest attack coincided with National Hate Crime Awareness Week and shows just how important events such as Pride festivals are in bringing the city together. Birmingham can be rightly proud of the way it safely managed to organise one of the few festivals not cancelled due to the pandemic just last month, adding colour and vibrancy to the city.

Next year, Birmingham will be in the international spotlight when the city hosts the 2022 Commonwealth Games. The abject homophobia suffered by so many Commonwealth citizens has certainly not gone unnoticed and the city is pulling out all the stops to make the 2022 games one of the most welcoming and inclusive games ever held. As part of the preparations, a Pride House in the City has already been launched.

This is an exceptionally helpful and welcome step forward, but we cannot overlook the fact that homophobic attacks are on the rise. We really need to ask two main questions. What are the causes of such hatred – and why do the perpetrators think they have a right to attack people so violently?

Some might point to certain religious institutions and say they are guilty of not doing enough to promote a society where we can all live together peacefully. Some might also point to the Brexit referendum as a cause of a less tolerant society. Figures show it uncovered a Pandora’s box full of hatred. Most worryingly, now the EU can’t be blamed for the UK’s woes, we should all be exceedingly worried who the government and right wing media might find to be the next scapegoat. Hatred is irrational. Please don’t be complacent. It could be any of us.

Thankfully one important thing has changed very much for the better. Unlike in the past, the LGBT+ community can now look to the police for assistance knowing they will deal with hate crimes with respect. But the police can’t be everywhere – especially not in the early hours of the morning when many of these hate crimes are committed. And are these crimes still pushed to the bottom of the pile?

Life has improved, but could we do better?

As a young (well, younger) gay man back in the 80s, homophobic attacks were frequent, and we certainly couldn’t rely on the police to be on our side. Due to Section 28, we couldn’t even reach out to a teacher and wouldn’t dare mention the real reason we’d been beaten up. We’ll never know just how many homophobic attacks have gone – and indeed still go – unreported.

Back then, it fell to our own community to sort something out. I remember very fondly a vigilante group called the Lesbian Avengers. Their patrols gave us more confidence to go out at night. But even they couldn’t be everywhere, and once you had left the immediate area of the few streets they patrolled, you were left to your own devices which didn’t include a mobile phone or even CCTV. I myself remember carrying an alarm and sometimes a pepper spray when I left my stint on Birmingham Gay Switchboard. For most gay men, giving a call to this phoneline was one of the very few ways of getting information. If you’re wondering about women, there was Lesbian Line. In those pre-internet days, both struggled to get their numbers mentioned in any publications, but that’s perhaps a story for another day.

At Switchboard, we often had to deal with calls from people who had been gay – or queer – bashed, as it was called it back then. These days, wardens provided by the Southside Business Improvement District (BID) have taken the place of the Lesbian Avengers and the BID plays a crucial role in keeping the area as safe as possible.

Jut just as back then, the wardens and the police simply can’t be everywhere. CCTV helps enormously to catch the perpetrators, but only after attacks have happened. We need to stop them from happening in the first place.

There’s no denying times have changed for the better when it comes to LGBT+ rights. It’s certainly no longer news when someone comes out, however famous, unless they’re a male sports person, then for some reason, it’s a whole different matter. Unlike the 80s where you were more likely to attend a funeral for a gay friend, nowadays so many of us have shared the joy of attending same sex weddings.

Members of the LGBT+ community now play a full role in leading society. Andy Street has just been voted back in as West Midlands Mayor – his sexuality has never been an issue. Even in Sandwell, hardly the most socially liberal of areas, the Deputy Mayor is gay and no-one gives two hoots. On a national level, one of the main highlights for this year’s Children In Need will be the ever ebullient weather forecaster Owain Evans playing drums for 24 hours.

Can we stop attacks from happening?

It’s such a shame the perpetrators of the homophobic attacks can’t put their energy to good use. Are the attacks simply “male bravado” or is there a more sinister cause behind them?

Do the perpetrators have so little belief in themselves that they feel the need to attack others? Why would they risk so much – after all, a criminal conviction could have serious implications for a long time? Just how can we as a society encourage them to use their skills to benefit society, rather than wreck innocent lives? In a positive move, Mr Kesseler’s attacker has now come forward and given himself up.

We mustn’t forget that homophobia doesn’t have to be physical violence – there’s also an undercurrent of homophobia in some circles of society.

The LGBT+ community has somehow become a “woke” issue. For example, at the National Trust, one of the trustee candidates at the forthcoming AGM elections has questioned the Trust’s participation in Pride – even though the award winning “Back To Backs” are in the gay village area.

What are people like that so afraid of? Is it the truth about themselves? Or is it perhaps they feel threatened by something different?

It’s not all bad news

A joint statement condemning the attacks has been released by West Midlands Mayor Andy Street, West Midlands Crime Commissioner Simon Foster, and Birmingham Council Leader Ian Ward. Not only have they all condemned the attacks in the strongest of terms, the new support service provided for hate crime victims will be useful. But let’s hope other measures can be introduced so no one needs to use this service in the first place.

We also need to hear a louder voice from all religious leaders condemning these attacks, along with more cross-cultural events where people can learn how to live together in a modern, multi-cultural society. And at the end of the day, we need to be able to agree to disagree with each other without resorting to violence.

What can we do to feel safer?

Perhaps we can take some inspiration from the 80s. Back then, we knew we had to be more self-reliant as it was up to us to ensure our own safety. Sympathy wasn’t always forthcoming from families or colleagues – and even when people were brave enough to report them, the police would put these attacks to the bottom of the pile.

When we’re out on the streets, there are techniques to make ourselves safer. Having an air of confidence, being aware of our surroundings, avoiding dark, unlit areas and even self-defence classes might help. An independent person can’t always be on their own, but even being with someone else didn’t stop Mr Kesseler from being attacked. Nor can you always let someone else know where you are. In a civilised society, none of these measures ought to be necessary.

Hopefully the police will soon find – and prosecute – the perpetrators of the attacks so we can once again have a Gay Village – and city – we can all be proud of. If you have been affected by Hate Crime, here is the link to the West Midlands Police to report the incident.