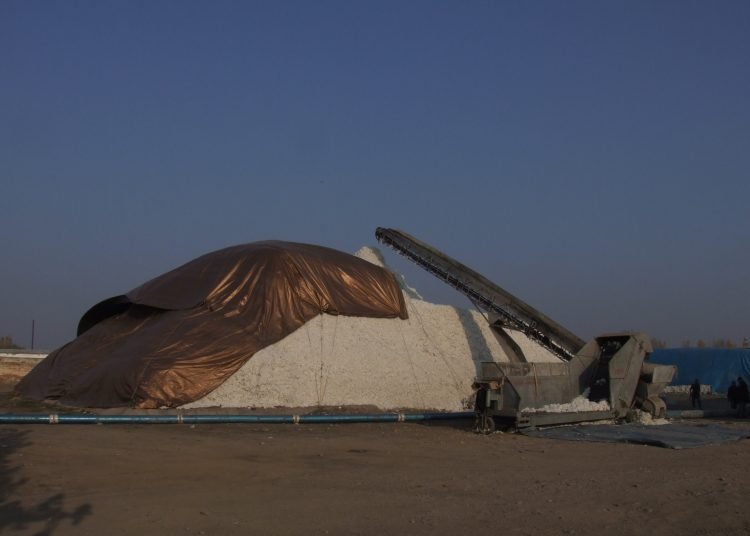 As the US implements a partial ban on cotton from the Xinjiang region of China because of concerns over forced labour and even genocide, recent scandals about low wages and insecure employment in Leicester’s textiles sector seem to have dropped off the radar. But both are symptomatic of wider problems in global textiles supply chains and of the risks of a move away from international cooperation towards renewed nationalism and protectionism. The seriousness of the concerns in China (mass surveillance, forced labour and allegations of genocide) might even seem to suggest the problems are different. But both highlight the uncaring side of globalisation, which seeks to evade or subvert international norms and regulations, and that seeks to exploit for profit, without oversight, democracy, or rights.

Intense competition, fast fashion and low inflation mean that the price of clothing is lower than ever, even as brands seek to increase profits and shareholder returns at the expense of suppliers. Despite the rise of Corporate Social Responsibility (CSR) and a whole alphabet soup of standards and certifications, environmental destruction and labour abuses remain a constant refrain in the textiles industry as suppliers struggle to meet the pressure to cut costs.

The US-China trade war and a rise in nationalism mean that international cooperation is declining, despite the promotion by the Organization for Economic Cooperation and Development (OECD) of a Due Diligence approach to supply chain problems.

In this race to the bottom, the biggest victims are the poorest in society, including minorities, migrants, the low paid and those in insecure work. But this threatens all, including the middle classes. Without the reviled ‘rules based international order’ (what we should positively call the Rights Based Order) countries and multinational companies can behave as they did in the days of the East India Company ie exploit, enslave and extract vast, untaxed profits. Figures such as Edmund Burke and even Adam Smith condemned these practices, both being opponents of the rapacity of the East India Company. (See The Corporation that Ruled the World).

Leicester came back into the news in 2020 with new revelations about labour abuses during the pandemic, and the naming of online brand Boohoo as a guilty party. As with Xinjiang, rumours and revelations have been around the industry for years. (I first came across problems in Xinjiang over 15 years ago, when reported organic cotton production appeared to be produced under the control of the army.)

In Leicester, low pay and workplace bullying are reported as rife, with reports rising since 2014. In 2015, the Ethical Trade Initiative (ETI) said fraud in the textiles sector in Leicester “resulted in an estimated £50 million a year lost in underpaid wages”. Yet in the UK, the government rejected all proposals for textiles put forward by the Environmental Audit Committee’s Fixing fashion report, with the chances of a wages inspection only once every 500 years following austerity driven cuts.

In Xinjiang the situation is more extreme. A surveillance capitalism is at work that regulates and coerces workers, helps force them to move from factory to factory, and is used to undermine Uighur culture. In July 2019, Australia’s ABC named brands like Ikea and Target among those sourcing cotton from Xinjiang.

In Xinjiang, the feeble protections found in the UK are non-existent. In August 2020, the Guardian reported that over a million Uighurs have been sent to ‘de-extremification’ camps where they are forced to work. Some 30 per cent of global cotton may come from this region or 84 per cent of Chinese cotton. The situation has been described as akin to genocide by the World Uighur Congress. In Parliament, Shabana Mahmood MP reported in a debate on 9 September that one doctor told ITV that she had taken part in hundreds of operations on Uighur women including forced contraception, abortions, and sterilisations, a violation of the Convention on the Prevention and Punishment of the Crime of Genocide. The Uighur Human Rights Project also warned about the use of surveillance tools to aid what a recent article in Prospect Magazine dubs ‘terror surveillance capitalism’. This builds on the ideas of preventative policing, made popular in Britain by the ‘Prevent’ programme, “which treats Islamic religiosity as an early indicator of the possibility of violent action”. Uighurs can be arrested for praying daily.

Leicester shows we need workplace regulations with teeth. Xinjiang shows we need these regulations with human rights and privacy at their heart: the right for people to be free of surveillance and coercion, and the right to live their own private religious or indeed non-religious lives with dignity, and with fair wages and working conditions in their professional lives.

Britain’s laws should still be able to resolve the problem of Leicester but not if regulators have no resources, modern slavery disclosure is voluntary and government is focused on creating ‘Singapore on Thames’ with its tax-avoiding freeports and other corporate welfare benefits. A government with authoritarian tendencies which is focused on hoovering up our data for political manipulation cannot be trusted not to increase surveillance here, especially if it has Covid-19 laws that have no expiry date.

Brand behaviour and pricing need to be transparent; the proportion of profit shared with workers and farmers is pitiful.  As I wrote in 2004: “if we’re not paying the right price for garments, then someone else is”, perhaps with their lives.

The ETI recommends there should be a “corporate duty to prevent negative human rights and environmental impacts” which is exactly the same thing the OECD recommends and is partly covered by the 2017 French law on corporate vigilance, the only law with consequences worldwide. The essence of what Due Diligence proposes is a duty on brands to identify, prevent, mitigate, and account for wrongs in their supply chains. This has the value that real problems are addressed in order of seriousness and brands take financial responsibility. Once they know their supply chain, they cannot claim ignorance as a defence.

UK laws may well justify a ban on Xinjiang cotton according to the Global Legal Action Network (GLAN). A petition submitted by them to HMRC argues that the scale of forced labour in textiles imports violates “UK principles prohibiting the importation of prison-made goods”. In Parliament on 9 September 2020, Nigel Adams, Minister for Asia, condemned the actions of the Chinese authorities. But there is no sign of action so far.

Where countries cooperate and where agencies are funded, it is conceivable to act and pressurise guilty countries to back action and new laws, with France’s 2017 Law on Corporate Vigilance possibly a template for proposed European Union legislation.

In their absence, action such as that by the United States becomes protectionist and will not address their own sweatshops in Los Angeles.

Further, an absence of cooperation does not address tax evasion and avoidance. Without tax income, governments may not be able to raise the money to pay for enforcement of the law, while addressing only local problems will not prevent them popping up elsewhere, be it in Uzbekistan, Myanmar or Manchester.