Is the NHS overwhelmed? Jake’s last Friday on Earth

A Nottingham man died after an overwhelmed NHS was unable to help him. He sat untreated in A&E for 9 hours before being transferred. 36 hours later he died. 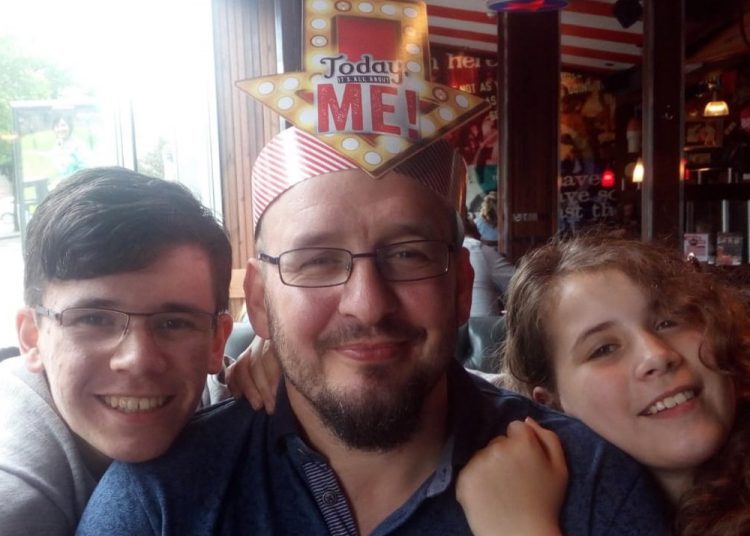 My husband, Jacob, was a hard-working father of two who coached the local football team, Eastwood Town in the Notts Youth Football League, in his spare time. He was an avid Nottingham Forest Supporter. He had no history of heart problems but on 1st December last year, he had a telephone consultation at 930pm with his GP, Dr Shah, about what he thought were panic attacks.

The doctor was brilliant – he had Jake describe the panic attacks, instructed him how to check his pulse and use our blood pressure monitor to get a reading and immediately told him to get to A&E as fast as he could.

There it was established that he had actually suffered two massive but silent heart attacks, as well as three strokes which had left him practically blind. His heart had been damaged and there was a big clot in one of the chambers. The doctors put him on blood thinners and on 9th December, he was sent home to recover. But two days later, things started to go wrong.

That evening Jake’s chest started to get “crackly” and he became increasingly short of breath. This time, he felt pain in his chest and neck, so we went straight to the hospital. He spent that Friday night in a rammed but eerily quiet A&E reception. He was cold, blind, alone, and clearly having heart attacks. He sat in reception until 7.30 the next morning, when he was eventually transferred to the acute cardiology ward of another hospital.

I had been refused entry and had to argue that he was newly blind and needed assistance, just so that I could sign him in and get him sat down. Then I went back to the car. I parked it as near as I could to A&E and called reception to alert them to the fact that Jake was clearly having heart attacks and had only recently been discharged. There was only one nurse on the desk, I was concerned that she may not have initially grasped the seriousness of his situation.

As I sat in the car, ambulance lights flashed past me every few minutes.

“Much worse off than me”

At 3am, I persuaded the security guard to let me in, to give Jake his phone charger and a drink. He looked shockingly pale and so very tired. He was freezing cold and in a lot of pain. I was about to kick up a fuss but Jake said not to. He pointed out there was only one doctor on duty and told me to look around.

The still, almost silent waiting area was full. Everyone was in the same position and lots of people were, in Jake’s words, “much worse off than me.”

It was true. There were some really sick people there, some laying on the floor and others with the ashen pallor to their faces that severe pain brings. The nurse looked exhausted. The situation wasn’t her fault and she was doing her best – if I had kicked up a fuss it would have used up valuable energy that she needed to devote to these patients. And Jake would probably have been even more upset.

The sense of despair and resignation in the room was palpable. What do you do in that situation? Should I bring the car round, take him out of there and try for another hospital? That might send him to the back of the queue.

I had a word with the nurse, suggested I might take Jake to Derby. She said he had been triaged, that he shouldn’t be moved and would be seen by the doctor really soon. I believed her and I’m sure that she believed what she was telling me at that moment.

As I left A&E, the security guard confirmed that there was only one doctor on duty. In Nottingham, a big city, in the middle of the worst pandemic in 300 years. He also said that this was often the case. I had no idea – how can one doctor be expected to see to all these people?

Back at my car, I realised why ambulances passed around so often. They couldn’t park because the bays were already filled, two deep, with other ambulances waiting to take patients in. So I guess they were circling until a space became free. Throughout that night, there were so many ambulances, more than I have ever seen in one place before.

When Jake was finally transferred to the acute cardiology ward, again we weren’t allowed in. We just dropped his bag at the door. We thought he was in a safe place, being treated and finally catching up with his sleep.

In reality, he was fighting for his life, fighting to get attention on the short-staffed ward and fighting the fatigue from having to sit upright, shivering and in pain for all those hours the night before. When he did eventually text me, he kept saying that he couldn’t breathe and was waiting for a Covid test. That came back negative but he still couldn’t breathe and we were still not allowed to be with him.

As the time ticked by, I constantly watched for the three dots on my messages, waiting for him to text. But the dots stayed away until the following morning when he texted to say he was OK. He had had a bad night – no sleep again due to all the tests – and was on morphine for the pain. But he still couldn’t breathe. They told him he had picked up a chest infection.

Then the three little dots stopped and instead the phone rang from an unknown number.

“How fast can you get here?”

It was the first of two “how fast can you get here?” phone calls.

At the cardiology ward, we were ushered into the family room, things were explained but all seemed hopeful. No one mentioned that Jake might not make it. We saw him: he looked so tired and kept falling asleep. His arms were full of bruises from where they had taken blood. A nurse was trying to take yet more blood from him while the patient behind us was becoming abusive to the struggling staff. Jake was exhausted, he said I should take the kids home so he could get some rest. So we left.

The second call came at 10.55pm. They were taking Jake to Intensive Care. We rushed down in the pouring rain and ran down to ICU as fast as we could. But he died as we were ringing the doorbell.

The doctor and nurse had tried to resuscitate him for 15 minutes. They were good people, visibly worn out but experienced and used to working with end of life situations. Even so, they were both clearly upset that they had been unable to save Jake. They must do this day in and day out, and with increasing frequency in times like these. Through the crushing heartbreak of Jake’s death, I felt so sorry for these two people who understood our pain and tried to help us, even though they clearly felt so desperately sad themselves.

I don’t know. Maybe Jake wouldn’t have survived, whatever was done. But the long wait, the pain and the fatigue he endured in A&E simply cannot have helped him.

For patients suffering heart attacks, the first hour is critical. The sooner a patient is treated, the better their chance of survival. Someone left sitting in A&E for 9 hours must watch that chance ebb relentlessly away as the minutes and then the hours tick by.

I am convinced now that I should have live-streamed the events of that night. Maybe a news channel would have picked it up. Ordinary people, maybe even the people in power, could have seen just how bad it was.

But you just don’t think about that, do you? All I could think of was how to help Jake. Live streaming wouldn’t have helped him but it would have shown what is really happening. Maybe it would have helped people understand that it’s not just about Covid, how mild or severe it is.

It’s not about being brave or afraid or pro- or anti-vaccine. It’s about the sustained cuts to funding and so many unfilled staff vacancies since 2010. Many EU staff left after Brexit and now the brilliant doctors and nurses that remain are unable to cope with the sheer numbers of people needing care during this public health emergency.

The NHS in Nottingham was overwhelmed on Friday 11th December and my husband Jake died.

Oxford by the river