The construction of Britain’s second high-speed rail line from London to Birmingham, Manchester, Leeds and the North is as divisive as Brexit. 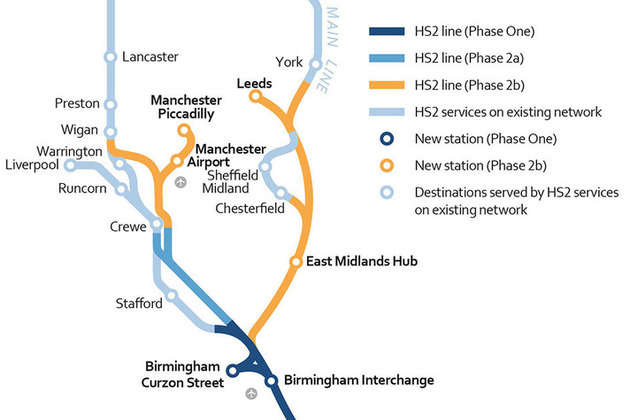 The construction of Britain’s second high-speed rail line from London to Birmingham, Manchester, Leeds and the North is as divisive as Brexit.  Supporters of HS2 view it as progressive investment in rapid, efficient, high-capacity safe travel. Others condemn its escalating costs, environmental impact and now its redundancy with pandemic-emptied trains.

The ‘Eastern Leg’ of HS2 will bring major and long-overdue transport investment to the East Midlands. Without it, our region risks relegation to a slow, outmoded secondary connectivity with the rest of the UK.

The government has announced its response to a consultation on the ‘design refinements’ to HS2 Phase 2b between Birmingham and the North. But this hides potential reasons for indefinite delay, if not cancellation, of this leg of HS2.

Most European countries, notably France and Germany, have already invested in modern, fast inter-urban rail links adding new capacity to old, slower and fully-used railways. Britain delayed doing so until the experience of running Eurostar trains over the slow suburban lines from the Chunnel to Waterloo, compared to the fast, purpose-built line through northern France, forced the construction of HS1 from St Pancras International via Stratford and Ashford.

Shortly after, modernisation of the West Coast rail line from London to Birmingham, Manchester and Glasgow went hugely over budget and timescale. It showed the limits of trying to modernise a rail system dating back to the 1840s to take both higher speed Pendolino tilting trains and higher capacity. Increasing passenger use and long-distance freight soon filled the extra capacity. The other trunk rail routes from London to the North, the Midland Mainline through Leicester to Derby, Nottingham and Sheffield, and the East Coast Line to Leeds, Newcastle and Edinburgh, with ageing infrastructure, had little room for future traffic growth.

HS2 was proposed to increase capacity and provide faster links via a new line from Euston to Birmingham (Phase 1) and extension lines to Crewe (phase 2a) and to Manchester and Leeds (phase 2b). Since the announcement of the route in 2009, and the start of detailed planning, HS2 has inevitably become a political football. Britain does not like large, publicly funded infrastructure projects that can be expensive and disruptive, and may be thought unnecessary. HS2 has always been controversial, yet it has been backed by Labour, Coalition and Conservative governments. Even the Johnson government realised that it made more sense to continue with the project than to scrap it – at least until now.

There is a reasonable case that can be made against HS2 or, at least, a critique of the way it has been managed. The route through the Chilterns from London to Birmingham has resulted in gross destruction of ancient woodlands and countryside. There is also extensive and costly demolition and construction work in London and in the West Midlands. The cost of the project has risen significantly from the original £7 billion civil engineering costs for phase one; the whole project was estimated at £56bn in the 2015 budget but that has now doubled to £106bn. Features have been cut such as a link between HS1 and HS2 connecting directly to European destinations. Public relations and cost management by HS2 Limited have been unsatisfactory and there continues to be opposition. The London-Birmingham phase is now too far advanced to be cancelled but cannot be justified on its own.

The government has confirmed this month that the western leg from Birmingham to Crewe, Manchester Airport and Manchester will go ahead as a priority. A new link in the proposed Northern Powerhouse Rail (NPR) between Manchester and Leeds has been added. This means that, when the NPR is built, HS2 trains to Leeds could use that route and the ‘eastern leg’ could be dropped. This is not (yet) the declared intention but it is possible and a northern media campaign in 2019 pushed this option hard.

So what about the East Midlands? The electrification of our Midland Mainline from London to Sheffield was cancelled in 2016 following cost over-runs on other lines. The then transport secretary, Chris Grayling, gave the go-ahead only to Kettering and Corby. So Midland services have continued with 40-year-old diesel trains (now being withdrawn); the new ‘bi-mode’ trains for the route are expected by 2022. In effect, the Midlands lost its promised all-electric railway in return for HS2.

The eastern leg of HS2 is controversial; it is routed alongside the M42/A42 to the Trent Valley, then on a high viaduct across Long Eaton to an interchange station at Toton Fields and northward parallel to the M1. The Toton Fields interchange will regenerate brownfield derelict railway land and provide for new, low-carbon housing, office business and amenities with excellent transport links.

Andrew Stephenson, Minister of State for Transport, has declared that, “plans for HS2 and other major schemes need to be brought together in an Integrated Rail Plan (IRP) for the North and Midlands”. The western leg will have priority but the eastern leg is being reconsidered. This was recommended by the Oakervee review of HS2 in 2018, which said “the Government is considering the best approach to get the most benefit for Leeds, the North East, and the East Midlands”.

Taken at face value, this seems plausible. It makes sense to see if the East Midlands leg can be delivered with less disruption, cost,  environmental damage and with enhanced connectivity. The IRP work has started and is expected to report by the end of 2020, although this government has often been slow to publish reports, including the one by Oakervee, that it finds awkward. There is a distinct possibility that this is a ruse for cancelling HS2 East Midlands to save money.

In any case, based on the existing plans, the East Midlands would not benefit from an HS2 link until the mid-2040’s, by which time London-Manchester trains could be using much of the line’s capacity. A report from Greengauge21 in July 2020 recommended rethinking the HS2 eastern leg, by building the Leeds-Sheffield and Birmingham-Toton-Nottingham lines sooner as priorities, including HS2 using existing lines to link directly into Nottingham and onto Newark, with a new connection onto the East Coast Mainline to the north. This option would redesign the central section north of Nottingham to Sheffield, and connect HS2 more effectively with the national rail network, sharing wider benefits with many more areas. Proposals such this may influence the IPR thinking.

But Lord Andrew Adonis, an advocate for HS2 and infrastructure development, has reported Whitehall battles over the project and Dominic Cummings’s opposition to its costs. His view is that “the government is only now going ahead with the Manchester leg of HS2 and is delaying indefinitely the eastern leg to Leeds, Sheffield, Nottingham & Derby”. If this is so, the East Midlands economy, connectivity and competitiveness will be damaged hugely. It is not travel times to London that will suffer but the future prosperity of our region.

The East Midlands often loses out to the greater firepower of the West Midlands and Northern lobbies. In late 2019, the only MPs arguing for HS2 in the East Midlands were Anna Soubry and Kenneth Clarke. Now they are no longer MPs, what do our newly-minted, mainly Conservative MPs have to say?