Just ten miles away from Stratford, Mr Glaser will bring a little piece of Hollywood to Shipston-on-Stour. His first UK exhibition includes an introductory presentation by Zoom, by invitation only. 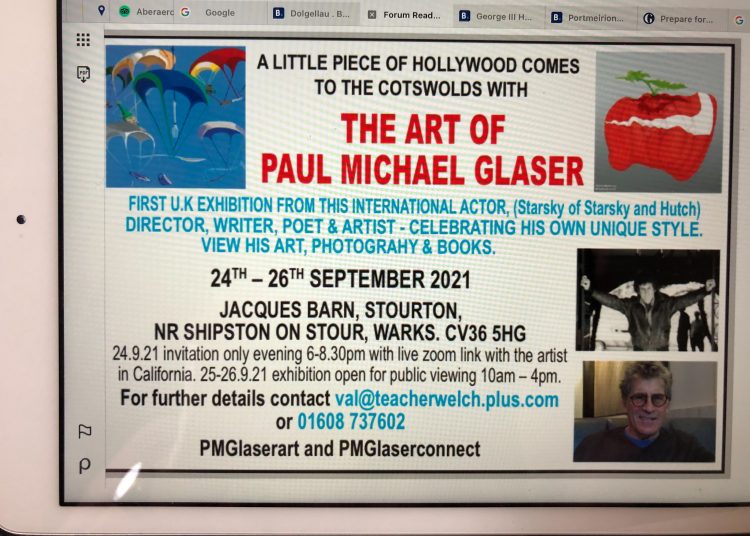 The Art of Paul Michael Glaser will be exhibited in the Cotswolds in September. Just ten miles away from Stratford, Mr Glaser will bring a little piece of Hollywood to Shipston-on-Stour. His first UK exhibition includes an introductory presentation by Zoom, by invitation only.

Running from the 24th to the 26th of September, the public exhibition will be the chance for those who remember Glaser as Starsky (plus or minus Hutch!) to discover his talents as an artist.

Commenting on an earlier 2021 exhibition, Mr Glaser said, “When I was a kid I did a lot of etching … lithographs and linoleum cuts and painting and sketching and everything like that, and then I went way from it from a long, long time. About 40 years ago I started getting into photography again, and I guess I’ve always been a very visual person because I was drawn to directing.”

The art looks bright, cheery and hugely colourful and will include photographs and books.

Shipston-on-Stour does not often host Hollywood stars but, nonetheless, it has had its own share of history over the years.

We moved there from Dorset and rented a lovely house to the north of the town. It was only 30 minutes from the school where I taught and 15 minutes from Stratford-upon-Avon. We noticed that no other town has the extra S in its name. Looking into the history of the name, in the 8th century it was ‘Scepwaeisctune’ (which we can imagine was ‘sheep wash town’) and by the 14th century it had become Sepestonon-Sture. Its current name gives the game away. Sheep being herded to London stopped for a break – and a wash – in Shipston.

In the 17th and 18th centuries, Shipston was a staging point for stage coaches. In the 19th century, agricultural produce and manufactured goods were loaded onto horse drawn trams, travelling via a branch line between Stratford and Moreton Tramway. By 1889, there were steam trains. But in 1960, Dr Beeching stopped the trains for good.

Sheep Street is, of course, the route the sheep took through the town and many of the houses still have the dates when the sheep went by. In 1268, Henry III granted the town a charter giving it the right to hold markets. There has been a sheep market in the square every year until Covid put a stop to it.  There were other markets too – stalls with craft work, food and woollen clothes (our jazz band played on the back of a lorry!) and the sixty independent shops would always open on market day. The annual Christmas market filled the square with stalls, music, children’s choirs and lovely items for Christmas presents. Although the markets have mainly gone now, there are still occasionally stalls in Sheep Street selling art works while music plays. Most years, there are French Markets which sell mainly wine, cider, delicious food and some gorgeous clothes.

Back with a bang

Shipston Proms offers a fortnight of glorious music every June. Rock groups, jazzers and choirs all participate. In 2018, renowned classical pianist Alexander Ardakov played in St Edmund’s church and gave the town an unforgettable evening. Like so many other events, the Shipston Proms didn’t happen last year but now it’s back with a bang! For this year only, the Proms will take place in September.

Forget Hollywood – this September, Shipston-on-Stour is the place to be!

Sent to Coventry – for culture!

Two academic years - The perspective of a headteacher