If Scotland can gain independence and rejoin the EU, reversing the folly of Brexit, I’ll drink to that. 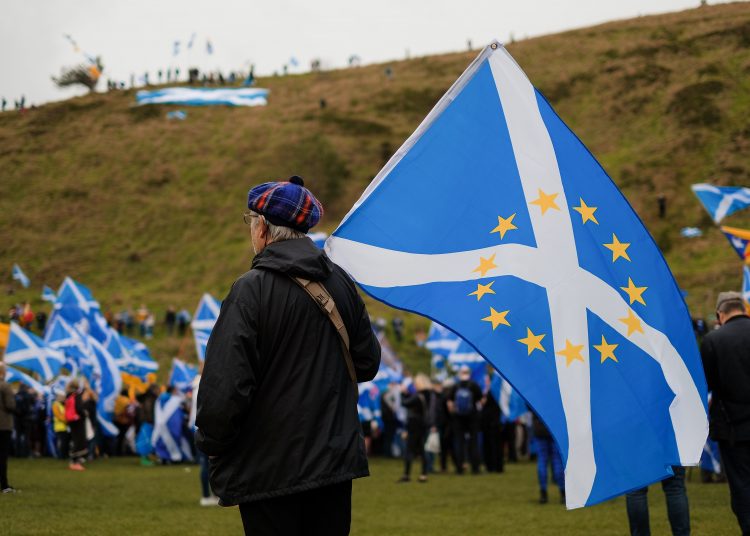 A fearsome battle is brewing over the future of Britain. On one side the UK Government, the majority of the press, and the entire British establishment, tacitly backed by the royals. On the other side, Nicola Sturgeon and her fellow Scotttish warriors. Their cause is just, their passion strong, and I wish them well.  If they can gain their independence and rejoin the EU, reversing the folly of Brexit, I’ll drink to that. A large scotch will suit me fine.

The time is now

“Now is not the time for another vote.” That weary phrase has long been Westminster’s stock refrain, denying Scotland its right to self determination. But the Scots intend to go ahead anyway, once the election victory is secured and the pandemic is out of the way.

They are right to do so. Though the European Union is well disposed towards Scotland, rejoining is unlikely to get any easier with time. Not only will the EU itself gradually change and diverge from us, but also Brexit Britain will change; including Scotland, if it stays in the union.

Looked at in Darwinian terms, Brexit represents a major environmental change, which will affect the evolution of the UK’s structures and businesses. Many will go to the wall, unable to adapt, but others will survive, a few will even thrive. It’s an ill wind that blows nobody any good, and the survivors will expand and grow stronger. These newly dominant forces will then form the new establishment and press to preserve the status quo, opposing the radical break that independence involves.

Aggravating this are the Westminster Government’s rearguard actions. A group of 20 civil servants have been secretly ordered to strip references to the European Union from tens of thousands of laws to stop a future Labour Government reversing Brexit, in an action known to insiders as “Operation Bleach.” But if you thought the official opposition would put up any resistance, think again. Unbelievably, Labour’s Keir Starmer has thrown in the towel and rarely mentions Brexit at all in the House of Commons.

Would Starmer, a former director of public prosecutions, have let Trump off the hook with a nod and a wink? Would he dismiss cases of historic child abuse and tell the victims to move on? Possibly not, yet when it comes to a gerrymandered vote riddled with lies which had devastating consequences for all of us, he looks the other way.

By contrast, listen to the impassioned speeches being made in the Scottish parliament. A joy and an inspiration for all of us who voted Remain! Scots are within sight of reversing the damage inflicted in 2016, elevating their country to the EU’s top table, and restoring the powerful alliance of 28 nations. They must seize the day.

Do we really need another divisive referendum?

Whatever happens, half the country will be unhappy. But Scottish independence is likely to be less traumatic than Brexit, because they will be gaining something – EU membership – instead of being deprived of something. Moreover it was something valued, that they had before and had purposely stayed in the union for; so in a sense it would be restoring the status quo.

Secondly, as Andrew Wilson pointed out in the Spectator, the SNP prospectus is worked out in advance; an orderly transition that is clear on currency, public finances and how it would approach an agreement with the rest of the UK. In other words, the antithesis of Brexit. And the Spectator is not normally noted for any bias towards Scottish independence.

A passport to success for the Scots, a wake up call for ourselves

With EU membership, the value of a Scottish passport will rocket, compared to the much hyped blue passports now being issued, the value of which has fallen off a cliff. The status of Scottish citizenship will also rise in the eyes of the world. (Following the loss of freedom of movement, the value of UK citizenship fell by 27.1 per cent, according to the Kälin-Kochenov Quality of Nationality Index).

As a guide to what is likely to happen, the Irish passport office has been overwhelmed with applications since Brexit. Following a vote for independence, millions of English will be scrutinising their family history hoping to find evidence of Scottish ancestry.

In my own case, as I am half Welsh, I will have to wait for Welsh independence to get my EU passport. Meantime, I raise my glass to the Scots.

To those who accuse me of wanting to break up Britain I say yes, I do. Brexit Britain is no good, it needs to go. Scotland’s liberation will not only be something for the Scots to celebrate, it could well be the jolt to shake England from its hidebound complacency and trigger reforms long overdue. When that day comes, we will perhaps have earned our own place back in Europe.

Mad dogs and Englishmen
Go out in the midday sun
Singing Rule Britannia
And getting Brexit done
They meet a canny Scotsman
Who pipes a different tune
“Get ready for the Indyref
Which will be coming soon
“I’ve filled my Jerry can with malt,
I’ve peeled my Brussels sprouts
I’m European to a fault
I have nae any doubts
So let’s escape the Brexit mess
The answer’s simple, just vote yes!
Or if you’re English, wish us well
As we renounce Westminster’s hell
And dinna worry, dinna sigh
You’ll come tae join us, by and by”.

with apologies to Noel Coward