Carolyn Thornborrow explores the history behind Reformation Day and its ties to Halloween. 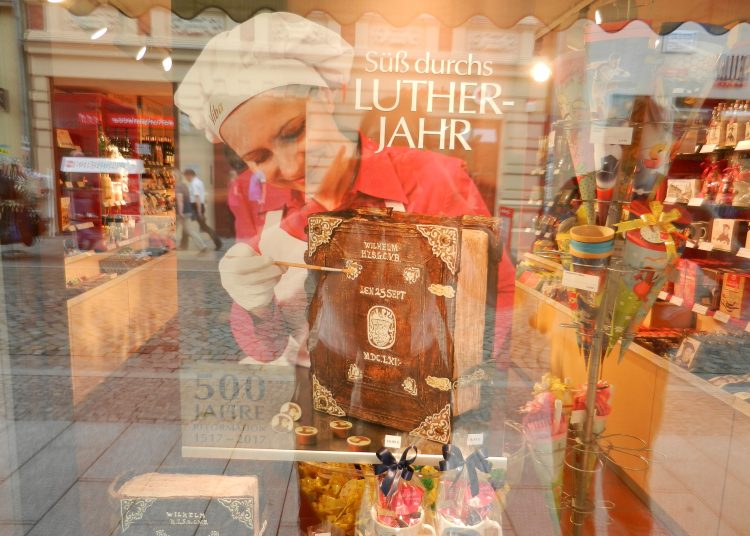 Pumpkins are appearing in the shops and some may have arrived on a doorstep near you. Yes, it is Halloween, although whether trick or treat will be as popular this year is debatable.

Halloween (more formally known as the Eve of All Souls Day) is celebrated on the same day as Reformation Day but in this country we are scarcely aware of the latter celebration.

Yet the two are inextricably linked.

All Souls Day (celebrated on 1 November) is the day in the church calendar on which those who have died are remembered. As such it was a good time for the medieval Catholic Church to make a lot of money out of people who could be persuaded to hand over hard cash in the belief that in so doing their departed loved ones would be released from the trials of purgatory.

Martin Luther had a major problem with this sort of fundraising. On 31 October 1517 on the Eve of All Saints Day he nailed his ‘95 Theses’ on to the door of the church in Wittenburg.  He did this to protest against what he saw as the abuses promoted by the medieval Catholic Church. The rest is history. We date the start of the political, social, religious and linguistic earthquake which we call the Reformation to the day that the 95 Theses were hammered on to the church door.

Trouble had been a long time coming and it was as though Luther had thrown a match on a bonfire. In the ensuing furore, Luther was in danger of losing his life.  His supporters arranged his kidnapping whilst he was travelling in the forest and he was whisked away to the Wartburg Fortress for his own safety. There, in his enforced isolation, he translated the New Testament into German in eleven weeks. The printer in Wittenburg organised double shifts on the printing presses. By September 1522, the German New Testament was being offered for sale in the Leipzeig Book Fair and distributed across Germany. It sold out almost immediately. Later, Luther also translated the Old Testament to create a complete Bible.

The son of a miner, Luther was also highly intelligent, educated and a great linguist. Latin was the language used in church and the language in which the Bible was normally read. Ordinary people had no knowledge of Latin. The German spoken at the time existed in many different dialects which were often mutually incomprehensible.

Luther’s concerns were those of a teacher, pastor and preacher, but in the pursuit of these goals he created a version of the German language that everyone could understand. It was a version of German that could be understood by the speakers of the different dialects across the German speaking world. His version of German was lively and expressive and as he said himself, he wrote for the mother at home, the child in the street and the man in the market.  He translated the Bible into German for them.

As the printing presses went flat out, the German which Luther had written became the standard version of German. This was partly because the translation of the Bible caused such debate and controversy but the controversies had to use the language of Luther to debate the new ideas.  And so it was that the version of German that Luther had created became the new standard. By the end of the sixteenth century, written German was the language of the Luther Bible, simply by virtue of the fact that so many people were reading and discussing it.

Even today, Germans who have never read or even picked up a Luther Bible unknowingly use its words and phrases every day.

Luther was also a great lover of music. In his youth he had sung in the church choir. He began the tradition of congregational singing that did not require a specialised choir. This was music for the people. Many of his musical works are still sung today. His hymn “Ein feste Burg ist unser Gott” (a mighty fortress is our God) based on Psalm 46 has achieved an almost mythical status.

In the town of Eisenach, underneath the shadow of the Wartburg Fortress, stands the St George’s Church. This is where Martin Luther sang as a boy as did Johannes Sebastian Bach, some two centuries later. Week after week the young Bach absorbed the words and rhythms of the Luther Bible. In the fullness of time, Bach created many great musical works, the roots of which go back to Luther.

There are many Bach choirs all across the UK, including in Leicester, Nottingham, Derby and Northampton. Bach’s music is widely appreciated and sung all over the country with his ‘Christmas Oratorio’ being one of the most popular pieces of classical Christmas music. If you happen to hear it in the coming weeks, just think of Luther.

On 31 October 2017, the 500th anniversary of the Reformation, Angela Merkel, Chancellor of Germany said in Wittenburg: “Luther set a stone in motion that was unstoppable and changed the world forever.”

The Culling of the Forests (an extract)