The protest at Greenham Common influenced a whole generation of women. It taught us about collective action, imaginative non-violent ways of protesting and gave us the confidence to use our own unique voice. 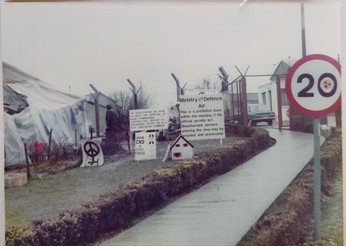 Helen Johns, a founder of camp is on the right Photo The Gain Family

Back in 1981 I was a young mum with two children under five. Walking to playgroup with another woman, we began a conversation about the threat of nuclear weapons.

News of the planned location of cruise missiles had been announced in parliament the previous year. The sites were named as RAF Greenham Common and RAF Molesworth. I had no idea how much Greenham Common would figure in my life at that point. Living in Stockport at the time, I didn’t even know where Greenham Common was.

During our conversation, my companion suggested we go along to a meeting of the newly-formed Stockport Against the Missiles. There we heard of a peace camp set up at Greenham by a group of women calling themselves “Women for Life on Earth”

What Women for Life on Earth stand for

In the late 1970s, NATO had responded to the deployment of SS20 intermediate nuclear missiles by the Soviet Union by expanding its own arsenal to include Pershing II missiles in West Germany and Tomahawk Cruise Missiles across Europe. 96 of the cruise missiles were to be based at R.A.F. Greenham Common.

In the Summer of 1981 four friends from West Wales decided to walk 120 miles to Newbury to protest against the storage of US nuclear weapons on British soil. A group of 36 women, four men and a few children left Cardiff. On arrival at Greenham, they presented a letter to the US Commander stating their opposition.

To reinforce their message, the women chained themselves to the fence, in a deliberate homage to the suffragettes. The US Commander had been dismissive and said he didn’t care how long they stayed there. The women responded to this challenge by setting up their camp.

Their actions to disrupt the activities of the USAF were highly effective. As well as imaginative non-violent protests at the base, nuclear convoys were tracked and blockaded. If the convoys were due in our part of the country, we could highlight the fact that they were travelling along roads in our communities.

Their audacious and lengthy protest lasted for 19 years. The battle against all nuclear weapons continues. The government plans to go ahead with renewal of Trident nuclear submarines and the USA, under Trump, withdrew from the INF Treaty agreed between Reagan and Gorbachev.

The peace camp at Greenham

The following February a coach-load of us traveled down to Greenham from Stockport to support the peace camp which, at the time, was a handful of caravans parked by one of the gates to the base. The women at the camp had been adamant that men were to play a supportive role only and the men were actively discouraged from being part of the impromptu meeting held in a damp van. The reactions of the men were interesting to observe – from tacit agreement to downright anger.

Later that year, my friend and I, now firmly committed to the disarmament movement, traveled to Greenham to stay at the camp for a couple of nights. Then I realised that our commitment was small-fry compared to the women who had been at the camp from the start, had endured harassment from local vigilante groups as well as defamation in the tabloids.

We spent a couple of uncomfortable nights crouched by a meagre camp fire, watching the tents so that the permanent camp residents could sleep. There were no alarming incidents to report but, one morning, we had taken to the woods to perform our daily functions and were just emerging when, out of the blue two police appeared on horse-back. Seeing us, they deliberately set the horses at a gallop. We had to leap off the path and pin ourselves against the perimeter fence to avoid being trampled.

Embrace the Base protest

Our next visit to Greenham was to take part in the ‘Embrace the Base’ protest in December 1982. We knew it was going to be big when we saw more and more coaches heading in the same direction. It actually took us about five hours to get there.

The services at Oxford had a queue for the Ladies’ stretching around the car park. There were a few startled men when women decided to use their toilets too!

The traffic jams as we approached the base were incredible, so we jumped out of the coach and walked the last couple of miles. We made for the main gate. It was obvious that there were more than enough women to encircle the nine-mile perimeter.

Women had taken posters, photographs of their children, and teddy bears to fix onto the fence. I took a photo of my children and some anti-war poetry. I chose some lines from a poem by S. Gertrude Ford, a feminist poet;

“Fight on, the Armament Kings besought, nobody asked what the women thought”.

We stood shoulder to shoulder and as the day drew to a close, we lit candles and sang. It was a very emotional occasion. It gave women their own voice – it was organised by women, and women came together to make it happen.

The U.S. Air Force began removing cruise missiles in 1989 as a result of the agreement reached at the Reykjavik Summit where Ronald Reagan and Mikhail Gorbachev had met. Gorbachev had, unexpectedly, agreed to a ‘zero option’ proposal to eliminate all intermediate-range nuclear weapons. He later said that the Greenham women had influenced his decision to attend the Reykjavik Summit.

The peace camp closed in 2000. There is now a Commemorative Garden on land once occupied by the camp. The land where nuclear weapons were stored in massive silos has now been returned to common land.

The protest at Greenham Common influenced a whole generation of women. It taught us about collective action, imaginative non-violent ways of protesting and gave us the confidence to use our own unique voice.