In his response to the plight of Ukrainian refugees, Sir Edward Leigh (Conservative MP for Gainsborough in Lincolnshire) reveals his lack of humanity.

by Richard Hall
in Opinion, Politics 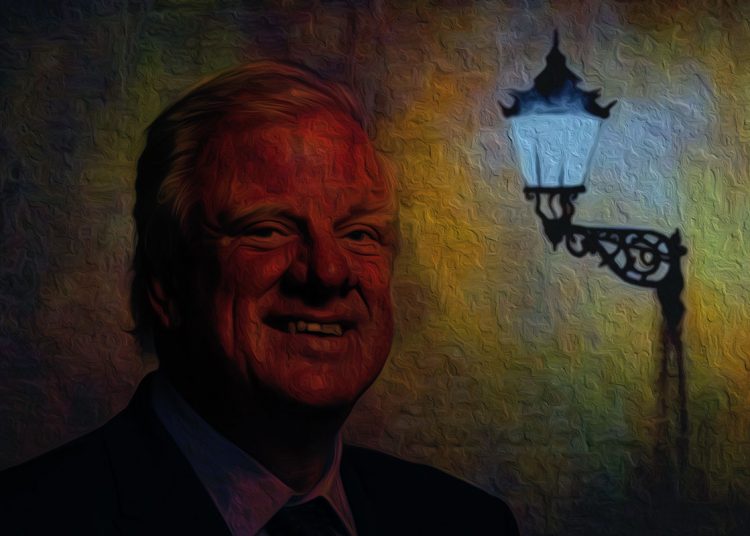 Since the invasion of Ukraine began over a week ago, some of the ugliest scenes on view have come from the UK, as it struggles to make a coherent response.

A war in Europe has produced the revolting spectacle of the government of ‘Global Britain’ doing everything possible to avoid becoming more compromised by its links with Russian oligarchs and their suspect money than it already is. But nothing compares with the attitudes on display on how to respond to the needs of the hundreds of thousands of refugees displaced by the fighting.

The most unpleasant sights of all were Priti Patel’s attempts to justify making refugees comply with our existing entry visa requirements, a Home Office minister proposing Ukrainians should apply under the seasonal workers’ visa scheme and Sir Edward Leigh, MP for Gainsborough, claiming that “Lincolnshire had done its bit for migration from Eastern Europe” even as people fled for their lives.

A tidal wave of criticism

Leigh’s remark drew a tidal wave of criticism. Journalist Tim Walker described it as words that will reverberate around the world, asking, “is this really how mean-spirited, callous and inhumane we now are as a nation?” Staunch Tory grandee and leader of the Local Government Association, Lord Gary Porter of Spalding, disowned him in vigorous terms saying that ‘weirdo’ MP Sir Edward Leigh “does not speak for South Holland on Ukraine.” Karen Lee, former MP for Lincoln, said his views were “deeply unpleasant…& not representative of a great many of us who live in Lincolnshire” while businesswoman Deborah Meaden threw down the gauntlet, asking the county directly, “Does he speak for you Lincolnshire?”

Substantial numbers of Lincolnshire residents were quick to repudiate his remarks and it wasn’t long before local media was praising the generous response from the community as collection points set up to gather donations were inundated with items.

It’s worth reflecting for a moment on why Leigh chose the words he used, because it should not be forgotten who he is and where he’s from. It’s a form of gaslighting:  ‘Doing your bit’ has military overtones and Lincolnshire makes a fetish of its links to World War 2 and the RAF. Leigh seems to be deliberately reminding people of those connections and the UK’s ‘finest hour’ in its struggle against a dictatorial tyranny. However, I suspect he’s not referring to Hitler or Putin, but rather trying to deflect attention from government failings  by perpetuating a false narrative about the EU.

Here’s the thing. Those who were loudest in their criticism of Leigh are not those he represents. He is a strident supporter of Brexit and Lincolnshire is as Brexity a place as it’s possible to find. In Gainsborough, the vote was 62% in favour of leaving the EU, on a turnout of 75%. The EU is still seen as an enemy and there is no sign that the hostile environment that represents UK migration policy is unwelcome in his constituency. The area he represents wanted to get rid of those they considered to be unwelcome and Leigh was expressing nothing more than the view of the local community. They ‘did their bit’ by getting the ‘forrins’ out. They don’t want them back and they don’t care who dies as a result.

Comments on the BBC East Yorkshire and Lincolnshire Facebook page bear this out. ‘Ah..an MP with some common sense..he can do maths!’ said one. ‘Ask the people of Boston if he is right. Ask areas of lincoln if he is right.’ said another. ‘I agree with him allow a sensible limit we voted for change.’ observed a third.

Some were quick to interpret him: ‘He doesn’t mean anything nasty he’s right what he’s saying boris and government got loads hassle from boats coming in from France and public wanted something done about it.’ Others trod familiar lines, ‘We have to bear in mind, our tiny country is already overcrowded with people’; ‘I have every sympathy for these people and can’t even begin to feel what they are going through but why do people and other countries look to us first for help?’

None of those comments show much recognition either of the needs of those seeking refuge or the generosity of the EU offer to Ukrainians. It is worth noting that many were quick to condemn Leigh’s views and the backlash was severe enough for him to try to explain himself the next day: “Unfortunately my comments this week welcoming the Government’s generous offer to allow as many as 200,000 Ukrainian refugees into the United Kingdom seem to have been misinterpreted or taken out of context because I highlighted that Lincolnshire’s needs still require government attention.”

That didn’t cut much ice with the public which was quick to remind him of his actual words.

It is yet another example of a Conservative politician trying to rewrite history to deflect his constituents away from the fact that all the promises his party made about Brexit and the ‘sunlit uplands’ that awaited  – especially in the provision of essential services – are almost six years old and are yet to appear.

History is being written

Meanwhile the war in Ukraine is writing history, by the day. It has exposed Russian weakness and revealed the astonishing bravery and patriotism of Ukrainians. It has united the world – and the EU especially – at astonishing speed. It has the potential to accelerate the move away from fossil fuels by ending Europe’s dependency on Russian gas. Finally and acutely, it has exposed the UK’s isolation from the heart of European policy-making, the absurdity of ‘Global Britain’ and the folly and validity of Brexit as questions continue to be asked about Russian money and interference.

More than anything else, in their response to the needs of desperate people, it has revealed the lack of humanity and moral bankruptcy of Edward Leigh and his supporters.