Richard Hall reacts to the news that Margaret Thatcher's newly unveiled statue has attracted not a few yolks as people protest her divisive legacy. 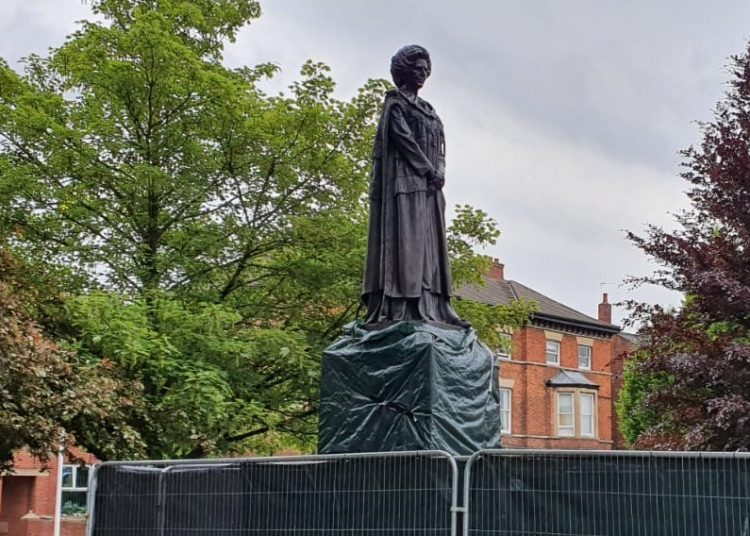 A statue of Margaret Thatcher has finally been lifted into place on a specially constructed plinth on St Peter’s Hill in Grantham town centre. Grantham of course was her birthplace, where she grew up and went to school. It’s where her political views were formed under the care of her father Alf Roberts, who ran a corner shop in the town and was its mayor.

The statue has a chequered history. Originally it was proposed for a site near parliament but Westminster Council rejected it, on the grounds that it would be a target for vandalism. South Kesteven District Council stepped in and offered to find a home for it. Council leader Kelham Cooke made it clear to BBC Radio Lincolnshire that while he realised the decision to erect the memorial was controversial because of her divisive legacy, he felt the statue was the right and proper way to mark her connections with the town.

An unveiling ceremony – accompanied by suitable dignitaries – had been proposed for 2020 but was delayed because of covid. A second attempt to put it in place in 2021 was rejected by the town council because of the cost (£100,000). The installation finally took place in the early hours of Sunday 15 May.

If South Kesteven District Council thought this low-key approach would enable the statue to find its home without controversy, within a couple of hours they were proved wrong. Video emerged on social media of a man throwing eggs at it. While the statue had many defenders the news was also greeted with a barrage of comments, many of which were – predictably – disapproving:

“As a vegan, I find this an unacceptable use of eggs. Everything else about it is good”, was one of the more polite remarks.

The legacy of Thatcherism

The decision to install the statue raises interesting questions about the political judgement of the district council. Why do this now? The country is gripped by a cost-of-living crisis which the current government’s levelling up policies are failing to address, a crisis far worse than anything manufactured in the Thatcher years, which included the crippling recession in 1981 that decimated the industrial heartlands of northern Britain and another in 1991, both of which were engineered by her right-wing economic beliefs.

Furthermore, the current Conservative party is represented by many MPs who believe fervently in the idea of the ‘sovereign individual’ – a philosophy that believes power and decision-making should lie in the hands of a wealthy few, with no role for the state. They support a government widely seen as the most inept, even corrupt, since the end of World War 2 and led by a prime minister who has no regard for truth, rules or the law;  a man who has no compunction about destroying the fabric of the nation and is wilfully enabling the shift away from the first duty of the state (the safety and welfare of its citizens) by handing opportunities to the private sector to enrich itself. Thatcher gave birth to these attitudes. What was the council thinking?

In an attempt to sound conciliatory, Kelham Cooke said he hoped people would appreciate the statue and see it as a talking point. He’ll be lucky. All this has achieved is to draw even more attention to the way the UK is declining because of the deliberate policies of those who believe in Thatcher’s legacy. Putting such a thing up in a town less than 90 minutes’ drive from the South Yorkshire coalfield (which her de-industrialisation policies destroyed in the mid-1980s and which still hasn’t been forgotten or forgiven) was never going to pass unnoticed. He, the town and the District Council will be fortunate if having a few eggs thrown at it is the worst the statue will suffer.

Thatcher and the EU

And there is a huge irony here, too. Forget the Falklands which many will point to as her crowning glory. Forget her Cold War antics with Ronald Reagan. Thatcher’s greatest political achievement was to lead Europe towards the creation of the European single market and the customs union in 1991. It led to the most stable and prosperous two decades Britain has known in the past 50 years, where business – and small businesses particularly – thrived. But the people in South Kesteven’s avid support of Brexit has wrecked that achievement and have enabled the destruction of the very thing they should most celebrate about her.

This statue will be a permanent reminder of that act of vandalism. What a way for them to kick their beloved ‘Iron Lady’ in the teeth.