Clark Renney explores the long shadow of Mussolini and the technicalities of far right extremism and fascism. 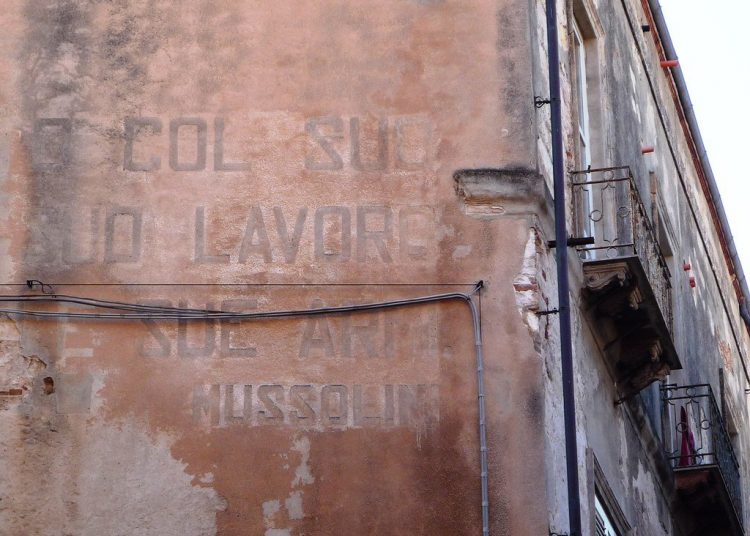 "Words from Mussolini erased at a building´s facade, Cagliari" by Carlos Affonso is licensed under CC BY-NC 2.0

On April 28 76 years ago, a fallen national leader and his mistress were executed by partisans, having been captured the previous day attempting to flee their native Italy for the safety of neutral Switzerland as the Second World War in Europe approached its catastrophic end. The woman’s name was Claretta Petacci; and her lover, one of the most fascinating characters in history was Benito Amilcare Andrea Mussolini.

Named by his father after famous socialists, Mussolini himself was committed to the proletarian struggle and quickly realized the power of the media, working as a journalist and editor of newspapers for much of his life. However, when he supported Italy’s entry into the Great War of 1914-1918, he enraged his fellow socialists and was expelled from the party. He subsequently abandoned the philosophy of the Left and founded a new doctrine; fascism. The word itself is drawn from the Italian ‘Fascio’ meaning ‘a bundle of sticks’, its root is the Latin ‘Fasces’. The concept being that one stick alone is weak, and bends or breaks; but when tied into a bundle, the individual sticks gain strength from each other.

Fascism is often regarded as being of the ‘Extreme Right’,  but this is technically incorrect; and a precise definition of what it actually is has always proved problematic. Fascism frequently encompasses what might be regarded as ‘Left Wing’ constructs such as nationalization of banking institutions and the creation of workers’ co-operatives. Mussolini himself saw his new philosophy as a ‘third way’, neither capitalist nor socialist in the framework that those concepts are normally understood. Instead he saw it as a society of workers and business owners having co-operatives and working together with their prime directive being the national interest.

He said…”Fascism should more properly be called corporatism, since it is the merger of state and corporate power.”

Therefore, whilst leaning towards a free market philosophy, it rejected the kind of laissez-faire capitalism which today is espoused by the conservative right on both sides of the Atlantic. It would also be true to say that the ruling classes of the capitalist system were, and are not lovers of fascism, since it bleeds them of wealth. But in 1920s Europe, faced with the alternative of communism, it represented the lesser of two evils.

Benito Mussolini essentially seized power in Italy in 1922; and although he dismantled the apparatus of democracy and established himself as ‘Il Duce’ (The Leader), he was also popular with the ordinary people through his commitment to programs of public works, again not something for which conservatism is renowned. Mussolini was a narcissist and an insatiable womanizer. Said to have lost his virginity to a prostitute when he was 17, he would father at least nine children, five with his wife, Rachele; and have countless sexual liaisons. He would die beside his final lover, Claretta, a woman 28 years his junior.

His ego knew no bounds; a brilliant orator and moreover a performer whose flamboyant gesturing from the balcony on Palazzo Venezia was worthy of any great actor on a Shakespearean stage, and which mesmerized the crowds before him.

Mussolini dreamed of building a second ‘Roman Empire’, and like many Italians felt his country had been betrayed by the Allied powers at the Treaty of Versailles after the Great War, (in which Italy had fought with the Allies). He launched offensives against Libya and the horn of Africa causing great suffering to the people there; and whilst the Italian regime did not initially display the fanatic racism of the Nazis in Germany, they believed the Italian people to be superior to Africans and were possessed of the fierce nationalism which tends to mark out all fascist regimes.

However, Mussolini was inept at military strategy and badly misjudged the mood of the Italian people, who had no real desire for involvement in another war.

Initially suspicious of Hitler and the Nazis, he eventually joined them in a ‘Pact of Steel’ which would ultimately prove catastrophic. His incursion into Greece in October 1940 was disastrous, and his humiliation was complete when the Germans had to rescue the Italian campaign there. Italian military forces and equipment were constantly found wanting during the Second World War, and they were widely regarded as an Achilles heel in the Axis war effort.

Dismissed as prime minister in 1943, then rescued by German forces, he was installed as a puppet ruler in Northern Italy, overseeing his countrymen who were now fighting each other. Reduced to a tragic, broken and almost comical figure, his end came on April 28, 76 years ago, by a firing squad.

The following day, in the ultimate ignominy, his body and that of his mistress were put on public display, kicked and spat on, before being hung up at a petrol station in Milan.

Italy was the birthplace of fascism, and any serious enquiry into exactly what it is must look closely at Mussolini, and the movement for whom he became an almost messianic cult figure. In spite of the disaster that fascism ultimately wrought upon Italy and the world, his appeal has been remarkably enduring, and that is one of the things that so fascinates this author about him. Unlike his nemesis, the German dictator, Adolf Hitler, the appeal of Il Duce has, in some quarters, lasted to this day; and there seems not to be the same kind of ingrained antipathy among Italians towards their former leader as exists in Germany for theirs.

Perhaps even more alarming is how the ideas of fascism are still very much part of Italian politics; maybe not a dominant force, but they are nonetheless influential. Benito Mussolini’s granddaughter, Alessandra, is a Politician who served in a coalition with Silvio Berlusconi and was a Member of the European Parliament for the right wing Forza Italia. She had previously sat in parliament for various far right parties directly descended from her grandfather’s Fascist Party, some of which later merged with Forza.

76 years on, where the birthplace of Adolf Hitler was remodelled as a police station, that of Benito Mussolini is a tourist attraction and museum in his birthplace of Predappio in Emilia-Romagna. Where Hitler’s body was burned, that of Il Duce would be exhumed and moved several times before reaching its present location, a family tomb visited by over 100,000 people every year. And in a world where, 76 years ago, fascism lay crushed in the most catastrophic conflict in the history of mankind, the sinister demons of its twisted philosophy are stirring once again.

The words ‘fascism’ and ‘fascist’ are thrown around all too easily in our present day and age. Anyone who disagrees with the politically correct narrative is automatically branded a ‘fascist’; but this is a dangerous mistake. It reduces the power of a word describing an aberration which needs to be studied and understood, and we should be careful to give it the respect it requires rather than using it as a cheap insult. Because those human attributes which drove fascist ideology are surprisingly resilient. ‘Our people’, ‘our nation’, ‘our soil’: we do not have to look far to see these ideas in our modern World, for it is easier to stir the masses with this kind of rhetoric than with concepts such as ‘equality’ and ‘justice’. Easier to follow the leader who comes to lead ‘us’ to greatness once again, rather than think for ourselves about creating a world where all human beings are valued.

And at the shrine where Mussolini’s remains now lie, there is a visitors’ book of remembrance where, on January 1, 2011, one person wrote…

“You have always been the greatest statesman of Italy. You loved your people and made them prosper.  You gave them work and ideals. We will never forget you… Soon your successor will come and remove all traces of corruption… Benito Mussolini, the Great!”

For some it seems, the old Latin phrase still inspires… ‘Dux Mea Lux’, (The Leader is My Light)…