An East Midlands charity supporting street children in Uganda saw its grant abolished when the government cut foreign aid from 0.7% GNI to 0.5%. 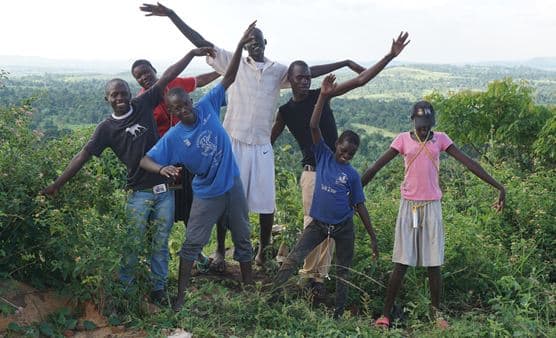 A Chesterfield-based charity supporting street children in Uganda has had its only international development grant withdrawn when the government cut foreign funding from 0.7 to 0.5 per cent gross national income (GNI).

S.A.L.V.E. International is a Chesterfield/Ugandan charity, aimed at supporting homeless and out-of-school children in Uganda.

It was founded by a group of three friends. Nicola Sansom and Helen Bolton were working as teachers in the city of Jinja, on the north shore of Lake Victoria, where they were struck by the high numbers of children not able to access education of any kind. Mike Asiya was a trained counsellor in Jinja with experience of being on the streets himself as a child, due to the civil war.

Their joint passion to create opportunities for these children led to the formation of S.A.L.V.E. International in 2008.

S.A.L.V.E. International believes that no child should have to call a street their home. Prior to the pandemic, there were 600 homeless children in Jinja, as well as a further 3000 out-of-school children. S.A.L.V.E. offers a multi-stranded programme of support including halfway homes, drug, rehabilitation, home tracing, community education and social enterprise work.

The effects of the pandemic

The strict COVID lockdown has vastly increased poverty levels in Uganda. The number of homeless or out-of-school children is estimated to have increased by over 25% since the pandemic started.

Girls are more often hidden on the streets than boys and there has been a big increase in the number of girls becoming pregnant while still a child themselves. Here’s 13-year-old Jalia:

“On the streets, you don’t have many choices. I can look through the rubbish for scrap to sell or I can sell my body. COVID has made things worse. Sometimes I sell myself for just a chapati so I have something I can give my baby brothers to eat. I dream about going to school. I just want a different life.”

Foreign aid from the UK

S.A.L.V.E. International has an average turnover of £160,000. So Nicola Sansom was delighted when she heard that their application to the Foreign Commonwealth and Development Office (FCDO) for a grant of nearly £50,000 had been approved. The money would make an enormous difference to their work and seemed to be entirely aligned to Boris Johnson’s stated aim of supporting the education of girls in developing countries.

Helen Grant, the government’s special envoy, visited Uganda last month and said, “The UK has set out ambitious global targets of getting 40 million more girls in school, and a third more girls reading by the age of 10 by 2025, in low- and middle-income countries. I look forward to working with Uganda ahead of the Global Education Summit: Financing GPE 2021-2025 in July to urge countries to invest in education and improve access for girls.”

Foreign Aid from the UK – cut

The grant was due to start in July. But at the beginning of May, the charity was informed that it had been cut – completely – following the government’s decision to reduce overseas aid from 0.7 to 0.5 per cent GNI, despite its manifesto promise to the contrary.

Sansom was naturally devastated and set out her concerns in an open letter to Dominic Raab, the Foreign Secretary.

“..it seems to be particularly irresponsible to withdraw money at this late stage and for a girls’ education project that supports some of the most at risk girls in the world.”

Thus far, Mr Raab has responded neither to the open letter nor to the Shadow Deputy Leader’s concern. Indeed, the Foreign Secretary didn’t even attend the emergency debate.

It isn’t just S.A.L.V.E. that has been punished. The whole of the UK Aid Small Charity Challenge fund has been cut which leaves every small international development charity in the UK without access to government support.

The gaping chasm between the Prime Minister’s benevolent rhetoric and his government’s actions is impossible to ignore.

In this particular instance, it is the girls and boys on the streets of Jinja who will suffer.

If you want to help

You can donate to S.A.L.V.E. International or sign up to their newsletter.

You could also write to your MP, asking them to hold the Prime Minister to his aim of supporting the education of girls in developing countries.

Dogged by Emma Purshouse - a review